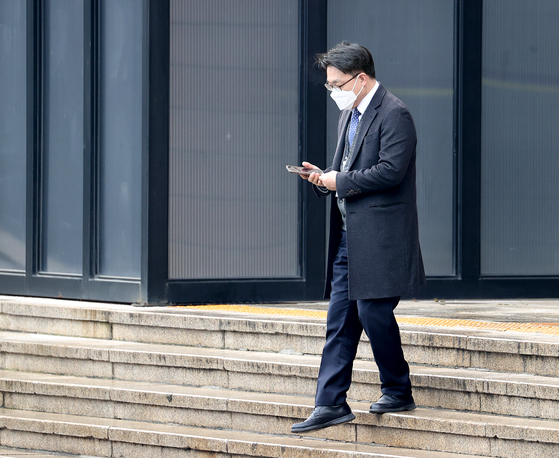 Meanwhile, prosecutors launched a probe into the Corruption Investigation Office for High-Ranking Officials (CIO) following a complaint filed by a civic group that the agency collected phone records of journalists.

“We are witnessing something that cannot possibly happen in a democracy,” PPP campaign official Yim Tae-hee said during a press conference at the National Assembly.

“Based solely on what has been uncovered thus far, we now know that there was illegal surveillance conducted on 78 lawmakers, 10 instances of surveillance on our party’s candidate and seven instances involving the candidate’s spouse.”

Earlier in the day, the PPP announced that the CIO, which began operations last January, collected phone records of 21 more PPP lawmakers than the 39 previously known, but that figure increased to 78 as revelations of the office’s activities mounted.

The PPP lawmakers whose phone logs and contacts were collected by the agency represent two-thirds of the party’s 105 lawmakers in the National Assembly.

The party’s floor leader Kim Gi-hyeon and chief policymaker Kim Do-eup were among those whose phone logs were checked, while six parliamentary aides also had their phone records collected.

Yim blasted the CIO for not only collecting phone records of lawmakers but also party youth activists who supported North Korean defectors’ organizations and were critical of the government of President Moon Jae-in.

Moon’s administration has a fraught relationship with defector groups after it legislated a ban on anti-Pyongyang leaflet launches across the inter-Korean border.

“We believe this is just the tip of the iceberg,” Yim added, vowing that the party would conduct a protest rally in front of the CIO headquarters on Thursday.

After Yim’s press conference, the PPP clarified that the CIO had collected Yoon’s phone logs three times, with various regional prosecutor’s offices responsible for the other seven instances. Likewise, Yoon’s wife, Kim Keon-hee, had her phone records collected once by the CIO, with the Seoul Central District Prosecutors’ Office requesting them five times and the Incheon District Prosecutor’s Office once.

The CIO now faces a probe by prosecutors and a chorus of calls for its abolition — only ten months after opening its doors.

A civic group called the Society for the Preservation of Law and Order filed a criminal complaint on Dec. 23 alleging that CIO chief Kim Jin-wook and other officials abused their power by collecting phone records from journalists, chief among them TV Chosun and JoongAng Ilbo reporters who covered an illegal travel ban issued by the Seoul Central District Prosecutors’ Office that was probed by the CIO.

In his report, the journalist cited a court arraignment, written by Lee and not yet made public, which detailed pressure applied by then-Senior Secretary for Civil Affairs Cho Kuk on the Justice Ministry in 2019 to drop a planned probe into Anyang District prosecutor Lee Gyu-won, who was due to undertake studies abroad in the United States.

Lee Kwang-cheol was eventually indicted in July for abuse of power by the Suwon District Prosecutors’ Office for being involved in arranging the illegal travel ban on Kim Hak-eui.

Not only did the CIO rifle through the phone records of the JoongAng Ilbo reporter in order to find the source who leaked Lee Sung-yoon’s arraignment, it also collected phone logs from TV Chosun reporters after the television channel aired allegations that Lee Sung-yoon compromised the integrity of a pending CIO probe into the illegal travel ban scandal by sending a secretary under his command to meet the CIO chief in his government vehicle on April 1, which TV Chosun confirmed through closed-circuit surveillance footage from a building next to the Gwacheon Bypass in Gyeonggi, near the CIO’s headquarters.

The revelations of the CIO’s far-ranging collection of phone logs from politicians, reporters, their contacts and even family members prompted a stern response from PPP candidate Yoon, who vowed he would “hold the CIO accountable” for its activities if he became president.

“Perhaps the CIO is confused, but instead of fulfilling its assigned task of investigating corruption among public officials, the office is playing the role previously played by domestic surveillance agencies that operated under the authoritarian regimes of the past,” Yoon said in a Facebook post on Wednesday.

Yoon also blasted the ruling DP, the Moon administration, and the DP’s presidential candidate Lee Jae-myung as he asked, “Why are those who so harshly criticized the collection of communication logs by intelligence agencies so quiet now about the CIO?”

Although Justice Minister Park Beom-kye expressed disappointment on Tuesday about the allegations concerning the CIO, the minister suggested Wednesday the office had committed blunders due to lack of experience in properly conducting probes.

“Whatever it may have done, the CIO did receive the warrants required to conduct its activities,” Park said in a partial defense of the agency’s collection of phone records. “I will review how the office can be assisted in the future with accumulated knowledge from police and prosecutors.”