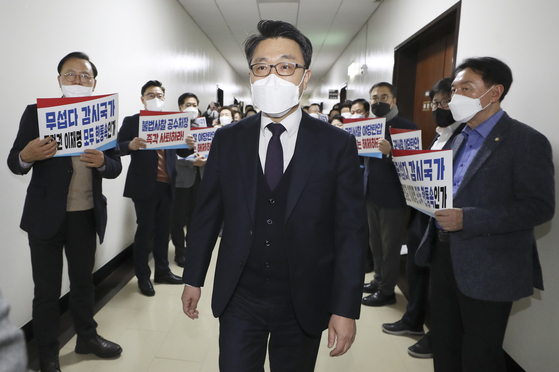 Anti-corruption watchdog chief Kim Jin-wook walks past opposition People Power Party (PPP) lawmakers on his way to a hearing at the National Assembly in Yeouido, Seoul on Thursday. [NEWS1]


People Power Party (PPP) presidential candidate Yoon Suk-yeol blasted the state anti-corruption watchdog for spying on journalists and prominent opposition politicians as the agency's chief hit back at the allegations at a parliamentary hearing Thursday.

Speaking at the launch of his Daegu campaign headquarters, Yoon called the Corruption Investigation Office for High-Ranking Officials (CIO) “insane” for having collected not only his phone records, but also those of his spouse, her close friends and his younger sister.

Yoon alleged that the CIO had also snooped on PPP lawmakers’ chat groups, and called for the immediate arrest and prosecution of CIO chief, Kim Jin-wook.

“This is not the day and age when you can strut openly in broad daylight and get away with this sort of thing,” Yoon said. He compared the CIO to a domestic surveillance agency operating under a military dictatorship.

As PPP calls for the abolition of the CIO grow — just eleven months after it began operations — Kim himself appeared before the National Assembly’s Legislation and Judiciary Committee to defend his agency.

Hitting back at a question by PPP lawmaker Cho Su-jin about the CIO’s activities, Kim called the term “surveillance” an exaggerated description of the CIO’s collection of phone logs from journalists, politicians and their contacts.

“According to the Ministry of Science and ICT, prosecutors collected a total 590,700 phone logs and police collected 1,877,000 phone logs," he continued, "while we made only 135 requests for phone records.”

Kim added, “Calling what we do ‘surveillance’ is an exaggeration. Why is it only surveillance when we do it?”

However, Kim’s critics on the committee pointed out that the CIO, which is tasked with probing only a particular category of suspected misdeeds, made a higher number of requests for phone records per case compared to the state prosecution service and police, which handle a much larger range of crimes.

When asked why the CIO looked into the phone logs of journalists and their relatives, Kim responded that he could not comment on details of an ongoing investigation.

The CIO has been accused of potentially compromising media sources by rifling through the phone records of a JoongAng Ilbo reporter in order to find a source who leaked Lee Sung-yoon’s arraignment, which detailed pressure applied by then-Senior Secretary for Civil Affairs Cho Kuk on the Justice Ministry in 2019 to drop a planned probe into Anyang District prosecutor Lee Gyu-won.

Lee Kwang-cheol was eventually indicted in July for abuse of power by the Suwon District Prosecutors’ Office for being involved in arranging the illegal travel ban on Kim Hak-eui.

The CIO also collected phone logs from TV Chosun reporters after the channel aired allegations that Lee Sung-yoon compromised the integrity of a pending CIO probe into the illegal travel ban scandal by sending a secretary under his command to meet the CIO chief in his government vehicle on April 1, which TV Chosun confirmed through closed-circuit surveillance footage from a building next to the Gwacheon Bypass in Gyeonggi, near the CIO headquarters.