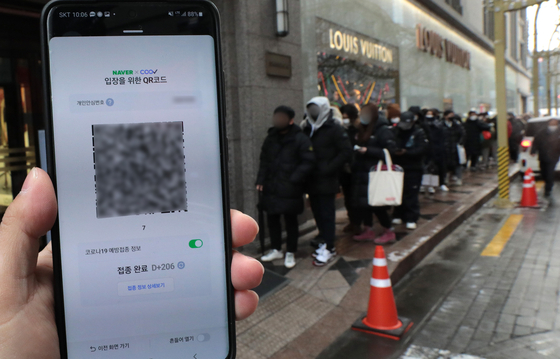 A person holds a vaccine pass showing that 206 days have passed since their primary vaccination in front of a department store in Seoul on Sunday. From Monday, access to facilities will be limited to people who completed their first round of vaccinations within the last 180 days or received a booster shot. [NEWS1]


Health authorities warn that the Omicron variant is expected to become the dominant strain in Korea within the next two months as the number of cases has already surpassed 1,000, far outpacing the Delta variant.

Korea reported 93 new Omicron cases on Sunday, with all but 29 locally transmitted, according to the Korea Disease Control and Prevention Agency (KDCA). The accumulated number now stands at 1,207.

It only took a month for Omicron to exceed the 1,000 mark since Korea saw its first five cases reported on Dec. 1.

By those numbers, Omicron has proven 2.5 times more transmissible than the currently-dominant Delta variant. Delta was first detected in Korea on April 22, 2021, and the 1,000th patient was confirmed 78 days later on July 9.

From last Thursday, health authorities have rolled out new Korean-made polymerase chain reaction (PCR) tests that can detect the Omicron variant within three to four hours, contributing to the increased detection rate of infections.

Sixty-nine people died of the virus, bringing the death toll to 5,694.

According to mathematical modeling by the KDCA, once Omicron accounts for the majority of new infections, the daily tally is expected to reach 12,000 to 14,000 at the end of January, even under the current social distancing measures.

To curb the spread of the variant, the government extended the current mandatory 10-day quarantine for all international arrivals and entry bans on short-term travelers from 11 countries, including South Africa, for four additional weeks through Feb. 3.

It also renewed its social distancing restrictions on private gatherings and business opening hours for another two weeks until Jan. 16.

Restaurants, cafes and bars are required to close at 9 p.m., while other businesses where social interactions are limited and considered less risky are able to operate until 10 p.m.

However, some changes were made to the extended virus curbs.

Movie theaters and performance halls, which were previously required to close at 10 p.m., can now allow customers to enter until 9 p.m., as long as movies and performances end before midnight.

In addition, large retail chains and department stores were added to the list of business establishments that require vaccine passes.

Korea currently requires vaccine passes — including proof of vaccination or a negative PCR test conducted within 48 hours — to enter a total of 16 types of facilities, such as restaurants, cafes, libraries and movie theaters.

While unvaccinated individuals visiting restaurants and cafes alone are exempt from demonstrating a vaccine pass, that exemption does not apply to large retail stores and department stores. The measure will go into effect on Jan. 10, with a one week grace period.

Starting Monday, the vaccine pass system will be applied with a six-month validity period.

Vaccine passes will thus be invalid for people who finished their primary round of vaccinations more than 180 days ago or have received a booster shot.

When unvaccinated people or those with expired passes scan their QR code, the scanner will sound a “ding-dong” alarm, banning them from entry.

The government advised people to update their COOV app, which holds the official digital copy of Covid-19 vaccination records, before Monday to avoid system crashes.

Meanwhile, the implementation of the vaccine pass system for teenagers was delayed to March 1 to coincide with the beginning of the school year, with a month-long adjustment period.

The introduction of vaccine passes for teenagers has been met with protests from some parents who refuse to vaccinate their children, citing potential side effects and reports of vaccine breakthrough infections.

Unlike adults, vaccinated children between the ages of 12 to 17 will not have a time limit on their vaccine passes. This is because teenagers in this age group are not included in the list of people recommended for booster shots.

With the slight decrease in new infections and more hospital beds earmarked, the nationwide occupancy rate of intensive care beds recorded 60.9 percent as of 5 p.m. Saturday, while there was no wait for admissions into these beds for five consecutive days.

In addition, Korea also plans to introduce oral Covid-19 pills within this month to reduce the number of serious Covid-19 cases.

Son Young-rae, senior epidemiological strategist at the Central Disaster Management Headquarters, said in a briefing Friday, “Uncertainty caused by the emergence and spread of the Omicron variant is a big variable, but the accumulated experience from Covid-19 health measures is a positive factor.”