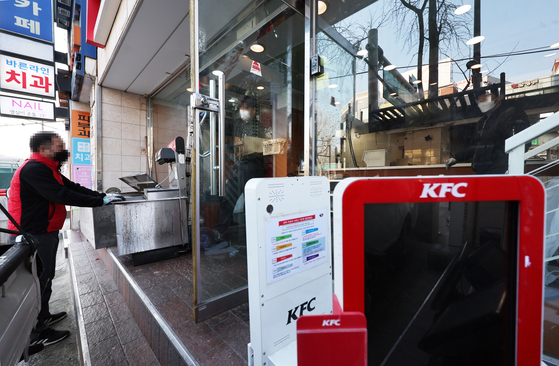 A man moves equipment from a KFC in Jongno District, central Seoul, on Monday. The first KFC store opened in 1984. [YONHAP]


The pandemic continues to claim businesses, including some with deep histories.

The first Kentucky Fried Chicken (KFC) in Korea closed Monday after a final finger-lickin' day on Sunday. KFC Korea cited the impact of the pandemic, which kept customers away from outdoor dining, and high maintenance costs for the store.

The branch in Jongno, central Seoul, opened in Korea in 1984, and was once a favorite place for young people to meet. It featured in the retro romantic series “Reply 1994” (2013) as a location characters used for blind dates. The opening of the store was so newsworthy it was reported in the newspapers.

"I remember feeling thrilled after I tried its biscuit with strawberry jam for the first time," wrote one fan online. Another wrote, "I used to go there almost every day when I was a high school student. It's a shame the store is closing."

KFC’s decision follows a number of other retail closures in Jongno, including a Hollys Coffee branch and Giordano store last year.

“The commercial district of Jongno has really suffered due to the pandemic,” said a spokesperson for KFC Korea. “The maintenance cost for our store was also high because the building is very old.”

"The commercial districts of Jongno, Myeongdong and Itaewon have taken a particularly heavy blow from Covid-19 because they are representative tourist attractions," said Seo Yong-gu, a business professor at Soomkyung Women's University. "It's been two years since the pandemic broke out, and it's difficult for a store to keep going that long without many consumers."

Other major brands have shut down significant stores due to the pandemic.

“Though the first store was symbolic, we found profitability to be more important as retail competition keeps getting tougher,” said Kang Da-yeon, a spokesperson for Homeplus. “We can’t deny that Covid-19 caused the closure of [five] Homeplus stores last year because customers feared the crowds at discount stores.” Kang said online sales have made up for some of the closures.

Sephora shut its Myeongdong branch on Monday. Sephora, established in Paris in 1970, was acquired by luxury conglomerate LVMH, in 1997.

The branch was opened in 2019, the same year Sephora entered Korea with its first store in Gangnam, southern Seoul.

Sephora was particularly affected by the pandemic because its key differentiation from local rivals like Olive Young and Chicor was to offer makeup services and beauty tips from advisors, which require visits to the stores.

In 2019, Sephora pledged to open 13 stores by 2022. It now runs five stores following the closure of the Myeongdong branch.

The Myeongdong branch was shut “due to the decline in the floating population of the commercial district,” said a spokesperson for Sephora. “Following the coronavirus, experiential brands like Sephora are being careful about opening new stores.”