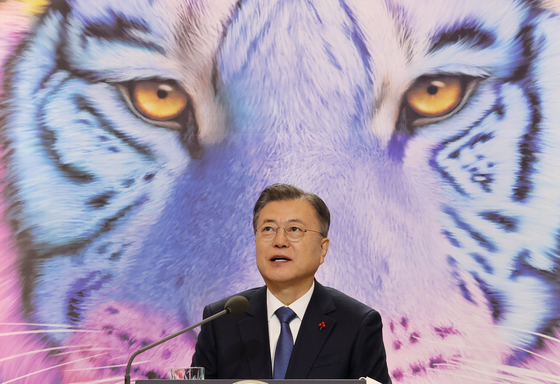 President Moon Jae-in holds a virtual New Year’s meeting with government, judicial, parliamentary and business leaders after giving his final New Year's address Monday at the Blue House, welcoming in the Year of the Tiger. [YONHAP]

In his final New Year's address Monday, President Moon Jae-in stressed that he will not stop efforts to “institutionalize sustainable peace” on the Korean Peninsula through the end of his term.

“If given the opportunity, the government will seek a path to normalize inter-Korean relations and an irreversible peace until the end,” said Moon at the Blue House in central Seoul. “And I hope that the next government will continue to strive for dialogue.”

In the speech, Moon didn't directly mention a declaration to end the 1950-53 Korean War, a key goal of his administration. Seoul officials have indicated that negotiations with Washington over a draft text for an end-of-war declaration have been completed, though it is unclear if key players can come together before Moon’s five-year term ends in May.

While he didn’t introduce any new ideas on North Korea, Moon acknowledged, “It is true that there is still a long way to go.”

He stressed that cooperation with the North is of “utmost importance.” Moon said that the “international community will respond” if the two Koreas resume dialogue and cooperate again.

Moon also emphasized national unity throughout his speech and pledged to work on overcoming the Covid-19 pandemic to the end of his term.

Moon acknowledged that the Omicron variant is becoming the dominant coronavirus strain in the country, but said with the cooperation of the public, strengthened social distancing measures are “showing an effect" and vowed to “achieve a complete recovery of the people's normal lives."

He added that 2022 will become the “first year of normalization by completely overcoming the crisis."

Noting the difficulties faced by people during the pandemic, Moon said that it was “very regrettable” that stricter social distancing measures had been extended, “increasing difficulties in the livelihoods of the people.”

He offered his “special condolences to small business owners” who have lost the end of the year holiday customers, and also have to worry about the Lunar New Year in early February.

Briefly referring to the real estate market, he said his government will continue to work toward stabilizing residential prices and added, “We will make sure that difficulties do not pass over to the next government.”

Moon noted that the domestic economy became stronger despite a global economic downturn caused by pandemic, noting good average growth rate for the past two years.

Moon also applauded Korea for becoming a “top 10 country” in various fields such as economics, the military, diplomacy and cultural capabilities.

“This government will do its best until the very end so that the national achievements can serve as a foundation for a bigger leap forward in the next government,” he said.

Referring to the presidential election next March, Moon said, “I hope it will be an election of unity that reflects the hope of the people, not hostility, hatred and division."

Stressing that “the people are the masters of politics and participation is the key to democracy," Moon asked the public to “actively participate in the election.”

Moon recently stressed national unity as a reason for a special pardon of former President Park Geun-hye, who was convicted of corruption and abuse of power and sentenced to 22 years in prison.