Antigen tests may be needed to fight Omicron

Antigen tests may be needed to fight Omicron 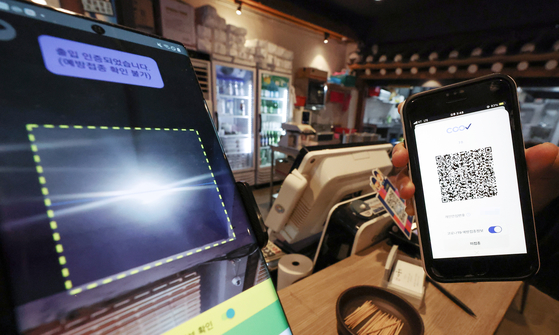 An unvaccinated person scan their QR code at a restaurant in Seoul on Tuesday. [YONHAP]


Korea is changing its public health response to gear up for the fast-spreading Omicron variant, health officials said Tuesday.

“Experts say the current speed of the Omicron transmission is two to three times, or even faster than [previous variants],” Park Hyang, director of antivirus measures at the Central Disaster Management Headquarters, told a briefing on Tuesday. “Some predict that we won’t be able to keep up if we deal with it the way we did with the Delta variant.”

While the transmission rate of Omicron is faster than the currently-dominant Delta variant, its rate of progressing to severe disease or death is 30 to 50 percent, according to local authorities. This means that more patients can catch it, but are more likely to end up with mild or no symptoms.

“The current virus testing method will have to be changed,” noted Park. “Various ways are being discussed around the Korea Disease Control and Prevention Agency.”

The government mentioned using antigen tests, which are cheaper and faster than polymerase chain reaction (PCR) tests, although they are not as accurate.

In a briefing held Monday, Lee Sang-won, head of the epidemiological investigations team at the Central Disaster and Safety Countermeasure Headquarters, said, “The usage of antigen tests can be slightly wider,” adding, “People who test positive in antigen tests will be checked for their diseases through PCR tests or other methods.”

With such concerns about their accuracy, it's likely that the antigen tests will be conducted at medical institutions, rather than allowing people to do them at home with kits from pharmacies or supermarkets.

“We will try to diversify the testing [...] and look for ways to conduct tests within the medical system,” Lee said.

The government is also examining ideas of including local medical clinics to treat Covid-19 patients in case infections break out on a large scale, especially as the Omicron variant is known to be relatively less severe than Delta.

“Currently, local hospitals are participating in the Covid treatment system to cope with situations at night,” said Park. “We are openly reviewing whether clinic-level medical institutions can participate [in treatment] if mild cases increase.”

While earmarking more hospital beds, the government once again emphasized the importance of people getting vaccinated.

The number of patients in critical condition stood at 973, recording below the 1,000-mark in 15 days since Dec. 20 last year.