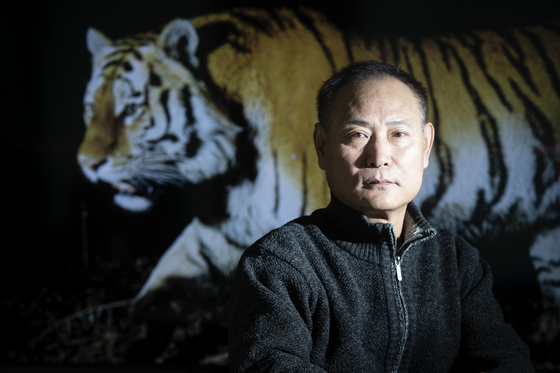 
“Leopards, lynxes, I’ve filmed lots of other animals, but there’s something different about tigers. Not only are they precious but if you meet one in the woods, there’s that feeling that they might kill you. At first, whenever I came back to Korea [after studying tigers overseas] that feeling would linger with me — like some sort of drug. It was after I spent some more time filming tigers that I realized the joys and sorrows of the animal.”

This is what 57-year-old documentary filmmaker and naturalist Park Soo-yong told the JoongAng Ilbo in an interview on Dec. 27.

Park has filmed Siberian tigers for over 27 years. In his book “The Great Soul of Siberia” (2011), he focused on how the Siberian tigers have become an endangered species. Recently, he published his second non-fiction book “Tail,” (tentative title) in late December, just in time for the Year of the Tiger.

Park was originally a producer for the Korea Educational Broadcasting System (EBS). He recalled the first moment he became immersed in tigers, when he was in Primorsky Krai, or the Maritime Territory, in Russia back in 1995. Since then he has spent at least six months every year, in cold frozen lands with temperatures of -30 degrees Celsius (-22 degrees Fahrenheit), chasing after tigers. He has over 1,500 hours of footage of tigers, observing and doing research on the creatures, an accomplishment even the BBC or National Geographic cannot claim. 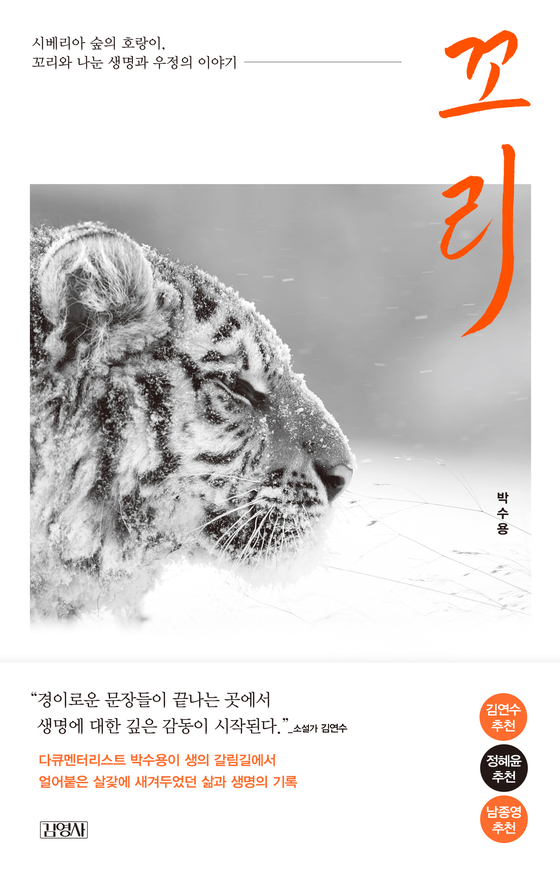 
“Tail” tracks the final year of an old male Siberian tiger called Tail. Tail used to roam the forest unrivaled when he was younger but now, a new fierce, male tiger has taken his spot. Tail, because he is weaker and feebler, is forced to hunt the dogs of the village — a type of prey he would have ignored in his younger years.

Park attempts to depict the old tiger’s enduring pain, due to his age and hunger, from a personal perspective. Sentences from the book, like “Even though Tail walked across the shallow yet firm mud, he could not help but drag his feet. His footsteps were heavy,” and “The fact that a wild tiger would give up its spot as No. 1 means that it has tumbled down to the bottom in the cold-blooded battle for life,” forces readers to empathize with the tiger who is struggling to survive in the snow-covered fields.

Park’s portrayal of Tail is unique in that it distances itself from the way tigers have been described in the past — as mystical creatures or ferocious animals. 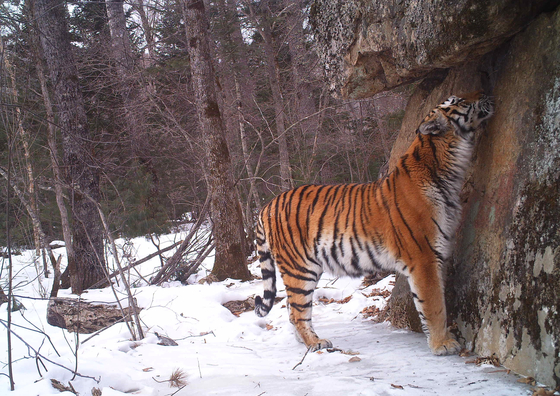 Tail is a Siberian tiger that is the main character in ″Tail.” [GIMMYOUNG PUBLISHERS]


In the book, Park also notes that 70 to 80 percent of Siberian tigers do not die from natural causes, but rather are killed by poachers.

“It doesn’t matter whether you are human or a tiger — I am positive that all living things are the same. The only differences lie in the levels of intelligence or lifestyles. The everlasting questions that arise from the moment you are born until the day you die remain the same, which is what I wanted to convey,” the book reads.

Tail died some ten years ago. Park decided to publish his story only recently because he wanted to do it well.

“When I directed documentaries, I focused solely on finishing them,” Park said. “For the past 10 years, I moved on from making documentaries and wrote books, and the process has helped me broaden my perspective on life. I needed sufficient time to deepen my thoughts in addition to writing about what I experienced.” 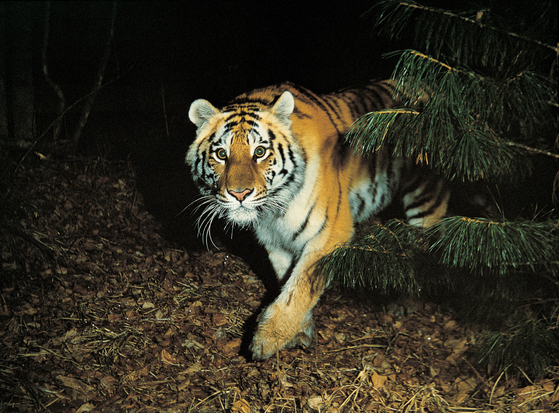 
When asked what his hopes were when writing about a bond that transcends species, he answered that he wished waste would be reduced.

“When a tiger hunts, it only kills one deer that it needs in order to last a month, even if 10 deer pass by,” Park said. “A human would willingly kill 100 and stock them in the refrigerator. If we are incomplete beings that must feed off of other living beings to continue to survive, then we should at least reduce taking excessive lives.”

On animal abuse, Park said that it was the result of selfishness.

“Recently I’ve noticed that there are more cases where one being kills another being in the most horrifying way possible,” Park said. “[I think it’s because] communication is a thing of the past and everyone is isolated from each other. Emotions are dry and we don’t accept others for what they are.”

After Park quit EBS, he established a non-profit organization called the Siberian Tiger Protection Society with a Russian zoologist in 2011. It aims to protect and conserve the remaining Siberian tigers in the world and one way it hopes to do this is by getting rid of tiger traps. Park thanked his wife, a fellow producer at EBS that he met while working together, for understanding his love for tigers.

The English version for “Tail” is set to be published this year. Park is already getting ready for his third book, which will be a criticism of global wildlife protection organizations and how they justify their use of traps by saying they are studying tigers.

“When a tiger gets trapped in a snare, it cuts off its own ankle within ten minutes to escape. But when it gets injured it cannot hunt. If 70 tigers get trapped, around 50 of them die. Is there any way to protect a species [as a whole] and each individual animal at the same time? That’s what my third book will be about.”