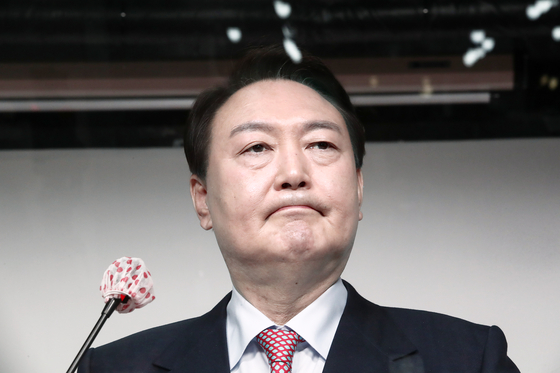 Yoon Suk-yeol, presidential candidate for the People Power Party (PPP), announces that his election campaign committee will be dissolved in order to start from scratch at the PPP headquarters in Yeouido, western Seoul, Thursday. [KIM KYUNG-ROK]

Yoon held a press conference at the party headquarters in Yeouido, western Seoul, after deliberating since Monday on a major overhaul of his campaign with just two months until the presidential election.

"As of today, I will dissolve the election campaign committee," said Yoon. "I acknowledge areas where the campaign committee was wrong, including failing to properly understand public sentiment, and will set things right again."

Yoon has seen a sharp decline in approval ratings amid messy internal feuding in the party, the abrupt departure of PPP chief Lee Jun-seok from the campaign committee, controversy over his wife's fabricated job credentials and his own gaffes.

"I bear complete responsibility as the candidate," said Yoon, acknowledging the criticism. "I also apologize to the people for causing concern over problems related to my family."

The former prosecutor general added, "I will equally apply the principles and standards that I have consistently upheld to myself, my family, and those around me."

Yoon said that he will opt for a "slim" or minimalist campaign and plans to recruit more young leaders who can better understand public sentiment. He said he "deeply repents actions that disappointed people in their 20s and 30s," promising to show a "different side."

In turn, Rep. Kwon Young-se, a fourth-term lawmaker for the PPP, will serve as head of Yoon's stripped-down election campaign. It will only have a few subcommittees to oversee such areas as public relations and policy.

Yoon did not elaborate on the exact structure or members of his revamped campaign.

Yoon expressed "sincere gratitude" to Kim Chong-in for having served as general chairman of the campaign being dismantled, and asked him to continue to offer "good advice" in the future.

Amid reports that Yoon had decided to part ways with Kim, the veteran politician announced earlier Wednesday morning that he was stepping down as general chairman of the campaign committee. He said it was necessary to "go separate ways if intentions do not align."

When asked if he plans to advise Yoon in the future, Kim told reporters, "We will have to wait and see. I don't really have anything to advise, with a situation like this."

Kim, often described as a presidential kingmaker, was brought on to the PPP's election campaign committee just days before its official launch on Dec. 6 in an attempt to patch up schisms between Yoon's confidants and other factions, and bring cohesion to the campaign.

There was some confusion Monday when the PPP said that Kim would be stepping down as the committee's general chairman amid a resignation en masse of senior members of the campaign. Kim later clarified that he was staying on, fueling rumors that Yoon was trying to oust the veteran politician from the campaign.

Kim expressed his disgruntlement speaking with reporters at his office in Gwanghwamun, central Seoul, later Wednesday, saying he has "never seen an election like this one," criticizing the continued influence of people surrounding Yoon.

He also addressed a charge by Yoon's aides that he had attempted a "coup d'état" on Monday. "What motive would I have to stage a coup d'état," he asked, adding, "I can no longer be on the same page as someone with that level of political judgment."

Kweon, who has frequently clashed with the PPP chief, announced he was stepping as both secretary general and a campaign general manager on Facebook that morning. He pledged to support a "newly-born candidate Yoon."

In the press conference, Yoon said, "I am well aware of public concerns over the influence of people close to me. I will make sure not to cause worries in the future."

Despite the resignations, political analysts view Yoon as having taken the side of his confidants through the latest turmoil, not the PPP veterans.

It is unclear if Yoon will be able to patch up relations with PPP Chairman Lee Jun-seok, who has rebuffed calls by some party members to step down to take responsibility for the recent chaos in the PPP.

Lee told reporters Wednesday that he doesn't think he would be of "very much help" to the campaign committee but added he has a close relation with Kwon Young-se and is watching the overhaul with "great anticipation."

He added, "I believe our candidate will be able to recover popularity if he leads more impactful changes."

Addressing speculation of a possible merger with Ahn Cheol-soo, presidential candidate for the minor opposition People's Party, who has seen rising popularity especially among the young, Kwon Young-se said in a press conference later that day that "our goal is to create a situation where we can win without a merger."

Yoon pulls campaign back from the brink