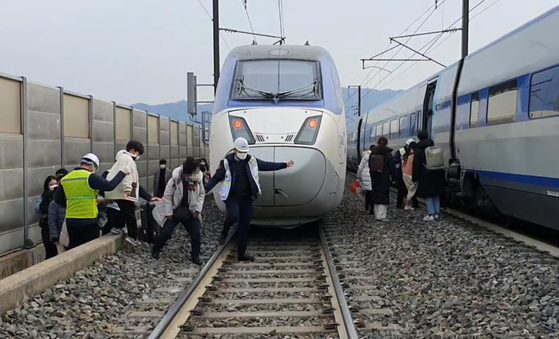 Passengers exit the derailed KTX train, which was hit by an object that fell from the ceiling of the Yeongdong Tunnel in North Chungcheong around 11:58 a.m. on Wednesday, to board a train arranged to pick them up. [YONHAP]


A portion of a KTX train heading to Busan from Seoul was derailed on Wednesday as it was entering Yeongdong Tunnel in North Chungcheong around 11:58 a.m., according to the Korea Railroad Corporation.

Seven passengers were injured, and one was moved to a nearby hospital for shortness of breath.

A steel structure fell from the ceiling in the tunnel and caused one wheel of a passenger car to break off, said the North Chungcheong Fire Department. The impact dislodged the passenger car from its course on the railway. Some windows were shattered, and luggage stored overhead shelves fell down.

The train consisted of 10 cars, carrying about 300 passengers. It had left Seoul Station at 10:30 a.m. and was originally scheduled to arrive at Busan station at 1:13 p.m.

“I heard a ‘bang’ as I was about to take a nap, and I was so scared,” one passenger said. “I saw sparks outside and smoke. I thought I was going to die. Water was leaking because the toilet was broken.”

Most of the evacuated passengers boarded another train that arrived to pick them up around 1:30 p.m. to finish traveling to their destinations. Six who were injured opted to return home, and one was sent to a hospital.

The Korea Railroad Corporation started repairs for the train immediately and the portion of the train that was inside the tunnel at the time of the accident was moved outside.

Some trains scheduled to pass through the tunnel on Wednesday were canceled, while others were rerouted to use non-express railways. As longer travel times were to be expected, the corporation advised travelers to use other means of transportation.

The Korea Railroad Corporation plans to wrap up its repairs before the first train leaves from Seoul Station for Jinju Station in South Gyeongsang at 5:05 a.m Thursday.

The Aviation and Railway Accident Investigation Board will conduct a more in-depth review on the cause of the accident, such as identifying what fell off of the tunnel’s ceiling and why.