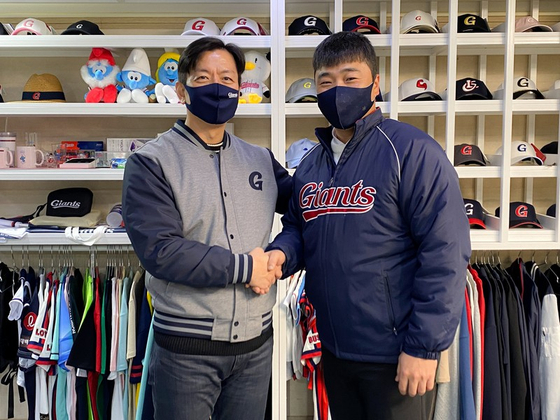 Jung Hoon, right, poses for a photo after re-signing with the Lotte Giants. [LOTTE GIANTS]


Free agent Jung Hoon has opted to stay with the Lotte Giants, signing a three-year deal worth 1.8 billion won ($1.5 million) on Wednesday. Jung was the last free agent to sign a contract in the KBO this year, with all 14 players that opted to enter the market agreeing terms for next season.

Jung was one of two Giants to opt for free agency this year, alongside franchise star Son Ah-seop. Son, who has played for the Giants for 15 years, took a four-year, 6.4-billion-won deal to join the NC Dinos this year.

Jung is the only player that the Busan club opted to sign this year.

With Jung's deal signed, all 14 free agents have now found a club to play for next season. It was a particularly tumultuous FA market in the KBO, with some major players changing teams.

The foreign player lineup is also nearly complete with only the Doosan Bears position player and one Kia Tigers pitcher left to be signed.