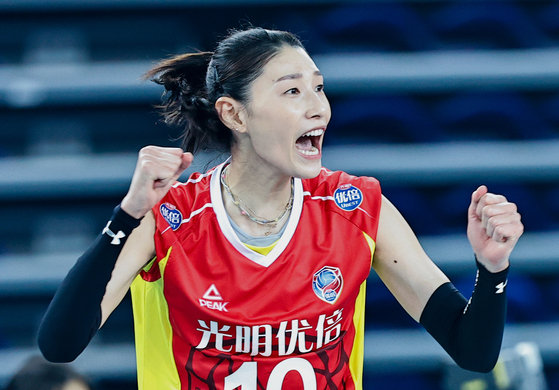 
Kim Yeon-koung rounded off her second Chinese Volleyball Super League season with Shanghai Bright Ubest finishing the 2021-22 season in third place. Kim is now a free agent internationally, but will not be able to play in Korea's V League next season.

The Shanghai club won the second leg of the bronze medal match against Liaoning Huajun on Tuesday in straight sets. Kim scored 20 points alone in the match on Tuesday after scoring 21 points, the most points in the match, in the first leg on Monday. The two wins put Ubest in third place in the Super League standings.

Kim, who had returned to Korea in 2020 to play for the Incheon Heungkuk Life Pink Spiders in the 2020-21 V League season after 11 years playing in Japan, China and Turkey, decided to rejoin Shanghai Bright Ubest for the 2021-2022 season. She returned to the Chinese club four years after she led it to the top of the Chinese Super League in the 2017-18 season to snap a 17-year drought. Ubest finished runner-up in the championship that year.

Kim had a turbulent season in China because of a rule change ahead of the opening of the season. The new rule limited the maximum number of foreign players playing at a time to one per team, instead of two. As the top two players on the Shanghai squad were Kim and Jordan Larson of the United States, who was named MVP at the Tokyo Olympics, the rule worked against the players and the club.

Kim is now a free agent internationally but not in Korea. If she were to come back to the V League, she would need to play another year with the Incheon Heungguk Life Pink Spiders to acquire free agent status in Korea. According to the KOVO, players must spend at least six seasons with a Korean team before becoming a free agent. Kim has played five seasons and the Pink Spiders retain their rights to Kim by placing her on the "voluntarily retired" list.

However, Kim cannot play this V League season because player registration closed on Dec. 28. Kim may choose to play in Europe or the United States, where registration is still open.

The five-week Athletes Unlimited Volleyball (AUV) league, a new league in the United States that prioritizes individuals athletes over teams, is open for registration and runs from March 16 to April 16. Kim has not yet been linked to the league, but if she did choose to play for it she would be entering a novel experimental system where teams are redrawn every single week and individual athlete statistics are the only thing that matters.