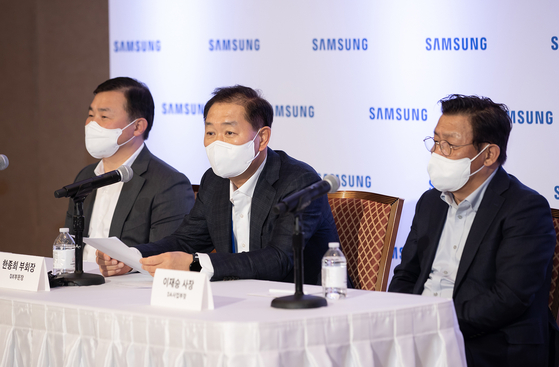 
LAS VEGAS — After Sony made a surprise announcement that it would start making electric vehicles, everyone at CES 2022 wanted to know if Samsung Electronics was going to too.

Han Jong-hee, the vice chairman of the tech giant who oversees consumer electronics and smartphones, suggested not Wednesday, although automotive devices and parts are of interest to the company.


“We’ve expanded the automotive business, especially through an acquisition of Harman,” Han said during a press conference on the sidelines of the tech trade show, which runs through Jan. 7.
“But we don’t have any plan to enter car manufacturing,” he said.

Sony CEO Kenichiro Yoshida said at CES on Tuesday that the company has formed a unit called Sony Mobility Inc. to explore the commercialization of its own EVs.

Samsung Electronics ventured into cars back in 1994, when it established Samsung Motors. That ended in failure and the money-losing unit was later acquired by French car manufacturer Renault.

Han’s CES appearance marked his first public appearance after he was promoted to vice chairman last month to head both the consumer electronics and smartphone businesses. He was accompanied by leaders of major Samsung businesses including Roh Tae-mun for smartphones and Lee Jae-seung for home appliances.

When asked about a potential deal with the panel maker, which is 37.9 percent owned by Samsung rival LG Electronics, Han said that “all possibilities remain open, although nothing has been decided.”

The comment represents a slight deviation from his previous stance, which was, “There is no plan.”

Analysts speculate that the size of the contract could be as high as 3 trillion won ($2.5 billion) per year. If the deal goes through, It will be the first time that the world’s largest TV maker has used OLED television panels, a high-end panel type with better contrast than LCDs, manufactured by LG Display.

When it comes to smartphones, Samsung is trying to improve its business in China by creating a team dedicated to the market. The dominant market players include Apple and Chinese manufacturers Xiaomi and Oppo. Samsung's market share is under 1 percent.

“We’ve formed a team directly headed by Vice Chairman Han as a result of deep analysis and contemplation about the Chinese business,” Roh said.

“We need to admit that there hasn’t been any tangible breakthrough yet, but what is also true is that the figures related to the Chinese market have been improved,” he said.