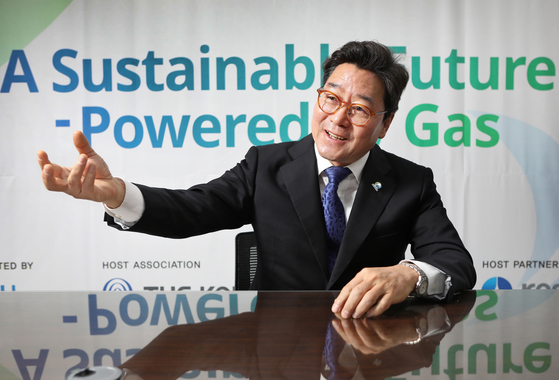 All eyes will be on Daegu in May as it hosts the World Gas Conference, the first major global event to be held in Korea since the outbreak of Covid-19.

The World Gas Conference, the biggest in the industry, will cover key issues of natural gas and related technologies.

This year the organizing committee is hoping that the event, to be held in Daegu's EXCO, will attract some 12,000 visitors from 90 countries and 350 or more exhibitors.

The theme of the conference is  “A Sustainable Future - Powered by Gas.”

The global energy event, held every three years, was originally scheduled to be hosted in 2021.

However, like many other major global events including the Olympics, the event was pushed back a year due to the pandemic.

The last conference, held in 2018 in Washington with the theme “Fueling the Future,” was considered a major success with over 11,500 visitors attending.

Major energy companies such as BP, Shell, Exxon Mobil and Chevron were among the 300 or more exhibitors.

“Gas is a key power source of the global economy,” said Park Bong-kyu, chairman of the organizing committee for the World Gas Conference. “There will be in-depth debates on issues such as post-Covid-19, the new paradigm in natural gas, hydrogen and carbon neutrality.”

Park said the gas conference, in the expanded exhibition hall, will also serve in showcasing Korean companies’ technology development related to carbon neutrality, including carbon capture utility and storage, which has become an essential technology in the energy industry in capturing carbon emissions.

The organizing committee chairman emphasized that while Covid-19 has led to more meetings going online, businesses prefer to meet in person to discuss matters.

He said that after much debate, it was decided that the conference this year would be held in person instead of digitally.

Park said the committee is confident in its decision despite the ongoing pandemic.

“We have looked at all angles and are continuing to prepare comprehensive quarantine measures for a successful conference,” Park said in a recent interview with the Korea JoongAng Daily.


The head of the organizing committee used to be a public servant who headed the Trade Department at the Ministry of Trade, Industry and Energy and was also the CFO of Korea’s leading gas company, Daesung Group.

Q. Less than six months are left before the World Gas Conference. What significance does this international event hold and what will its economic effect be?


A. The World Gas Conference 2022 [WGC2022] is the world’s biggest international gas conference with a history and tradition of 90 years.

Korea was able to win the bid to host the international event in 2014 after three attempts. Korea is the third country in Asia to host the event. The two other host countries are Japan and Malaysia.

WGC2022 is a meaningful event where government officials, corporate CEOs, representatives of nonprofit organizations and energy experts gather in one spot to discuss key energy issues and exchange new information for the development of the global gas industry.

The event this year will bring positive effects of a wide range including establishing a global network and strengthening international relations in Korea — one of the major consumers of liquefied natural gas [LNG] —, an opportunity for Korean companies to expand overseas, business opportunities for major energy enterprises and enhancing the competitiveness of Korea’s energy industry.

Daegu will be able to enjoy a boost in its regional economy by hosting the international event, in tourism, hotels, transportation and the MICE [meetings, incentives, conferences and exhibitions] industry.


As the first international event held since the outbreak, what do you think will be different from past global events?

WGC is an international event with a long history. Our organizing committee is focused on upholding the traditions of past events, but with an upgrade where some parts will be different from before.

First, the theme of this year’s event is “A Sustainable Future - Powered by Gas.”

It will be an event where various topics related to gas, which is a key power source of the global economy, will be discussed, and there will be in-depth debates on the changes in the global energy industries including post-Covid-19 and the new paradigm in natural gas, hydrogen and carbon neutrality, the role of energy sources such as renewable energy, and climate change.

Compared to past events, we expect high participation from neighboring China, Japan and Taiwan, which are the world’s biggest LNG importers, as it is held in Korea, a major East Asian gas importing country.

The participation of such major gas importers is expected to lead to high interest among gas exporters, which will create many business opportunities.


Many countries are pledging carbon neutrality. How much interest do you think there will be during this year’s conference on eco-friendly energy? Is there any special event prepared by the organizing committee?

Gas energy is a necessary energy source in achieving carbon neutrality, as it is stable and sustainable.

Recently, the International Gas Union [IGU] expanded the definition of gas to include biogas, synthetic gas and hydrogen.

The organizing committee is preparing to organize the event where a wide range of issues will be dealt with through strategic sessions including a keynote speech and debates on current issues held Tuesday and Wednesday [during the conference].


The border between industries is thinning, especially with IT now converging into different fields. Can we expect to see other industries including IT participating in this year’s conference?

The role of cutting-edge technologies including IT is increasing significantly as the energy industry is moving toward a sustainable future.

Gas industries are increasing efficiency in all stages of its value chain, from excavation to development, production, distribution and consumption.

And there are continuing efforts on safety and optimization.

To do so, technologies actively being utilized include data analysis, simulation, sensor technologies, robotics, drones, artificial intelligence and high-tech materials.

Digital communication technology and forecasts made through big data are necessary in optimizing [energy] grid management, including for energy efficiency in urban settings as well as for renewable energy.

As such, the conference will be setting up nine themed exhibitions, including Innovation Korea and Digital Transformation.

Other gas-related tech exhibitions include Marine, Sustainability & Eco and Gas for Transportation.


There are concerns over the spread of the Omicron variant. Recently, Switzerland canceled the Universiade. The WGC was delayed for a year. Do you have specific quarantine measures?

It is true that there are uncertainties in holding a large-scale event such as the WGC as Covid-19 sweeps through the world.

The WGC2022 organizing committee, along with IGU, the Daegu Metropolitan Government and the host partner Korea Gas Corp., sufficiently reviewed the Covid-19 situation and in November 2020 decided to delay the event until the next year.

Following the confirmation of the postponement, the organizing committee has been working on preparing for the event and businesses plan accordingly for a successful hosting.

As the safety of the participants is essential, we are working closely with EXCO to set up a systematic quarantine system during WGC2022.

As of December, the number of people vaccinated in Korea is 80 percent, and we are expecting the situation to improve. However, we are still remaining alert to the spread of the variant.

The organizing committee is doing all it can for a normal opening of WGC2022.

They say a crisis is an opportunity, and we are confident that WGC2022 will be the first face-to-face energy-related large-scale event in 2022 and a good example in overcoming Covid-19.


How will major global forums like the WGC change after Covid-19? What impact do you think it will have on the MICE industry?

The MICE industry suffered heavily from Covid-19 and non-face-to-face services have now settled into our lives in all aspects due to the restriction of movement and the social distancing regulations implemented throughout the world.

Even the MICE industry is transitioning its management to a hybrid form where both face-to-face and online events are held simultaneously.

Considering the characteristics of the MICE industry, which emphasizes meeting face-to-face, there is some unexpected confusion.

[However,] we could expect additional effects from the new hybrid model that converges the existing infrastructure with technology that will expand time and space.