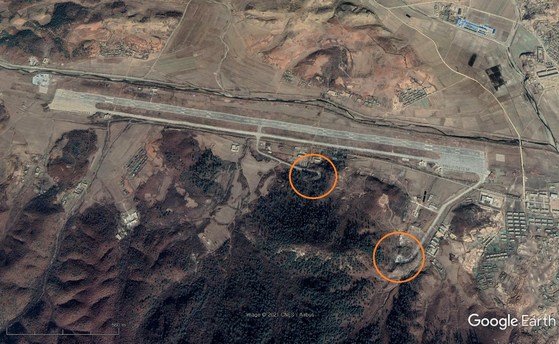 An underground hangar for aircraft on the southern side of a runway at an airfield in Nucheon-ri, North Hwanghae Province, North Korea, as seen in recent satellite imagery. [GOOGLE EARTH]


North Korea’s fighter jets are heading to its mountains, where its concealed air bases are located.

The JoongAng Ilbo confirmed in a report Monday through satellite imagery from Google Earth that North Korea’s Air Force bases are either built in mountains, or its taxiways and runways link underground bases.

The Uiju airfield located in North Pyongan Province, near the border with China, which has recently been equipped with quarantine facilities in preparation for North Korea to open up trade with China, is also connected to the mountains through a taxiway.

In the case of the North's Taetan Base in South Hwanghae Province, east-west runways are installed in the mountain, and entrances for aircraft are located on both sides near the runway.

Transport expert Ahn Byung-min, head of the Korean Peninsula Peace and Cooperation Institute, said, “Aircraft are greatly affected by wind during takeoff and landing, and it is common to build airports on open ground to be prepared for emergencies.”

He added, “Mountains around the airport can lead to gusts, which may pose a serious threat to safety.”

Despite such risks, North Korea has adhered to building runways near mountains.

This is the same reason that North Korean aircraft are lined up at the entrances to its underground bases rather than next to runways.

“During the [1950-53] Korean War, North Korea completely lost its air power, making it defenseless against the United Nations Command’s air strikes,” a former high-ranking South Korean Air Force official said. “Because of such an experience, North Korea builds bases underground in mountains to protect its aircraft.”

The fact that there are almost no igloos, or munitions storage magazines, or other maintenance facilities at North Korean air force bases and only runways are visible is because such facilities have been driven into underground caves in the mountains.

However, the North’s underground protection strategy also has its limitations, with the development of missiles that precisely strike targets and bunker busters, or bombs that can penetrate underground military facilities.

At an airfield about 9 kilometers (5.6 miles) southwest of the dual-use Kalma Airport on North Korea’s east coast, aircraft can take off immediately after they leave the mountain using an underground runway.

There is also a similar facility at an airfield 3.8 kilometers east of an air base in Nampo in the west coast. The runways were built in three directions centered on the underground base.

When selecting an area to construct an air base, the South Korean military attaches great importance to operational capability, airspace, obstacles and weather. Along with such meteorological and topographical factors, noise and development plans are also important, as it is related to possible residents’ complaints.

North Koreans, however, do not consider such residential complaints. A runway at North Korea’s Changjin air base in South Hamkyong Province is located just 450 kilometers away from a private residence. 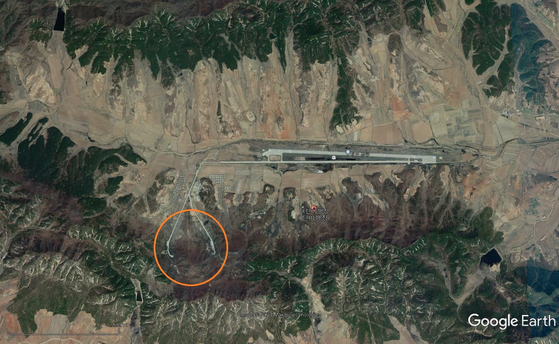 Runways are installed in the mountain and entrances are spotted leading to an underground facility at the Taetan air base in South Hwanghae Province, spotted through satellite imagery. [GOOGLE EARTH]