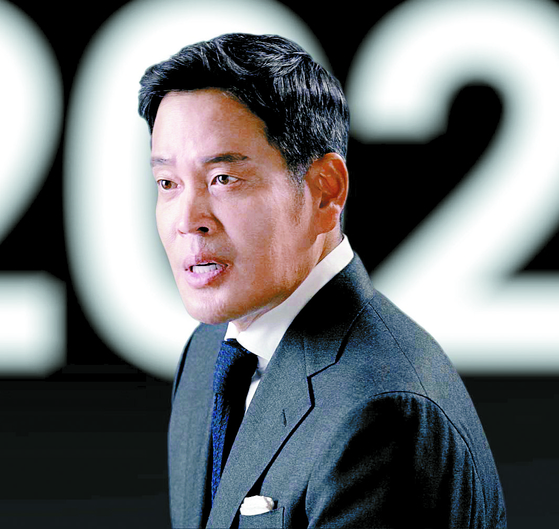 
Shinsegae Vice Chairman Chung Yong-jin's anti-communist tirade on social media isn't doing much for his stock, but has gained him lots of attention.

Shinsegae Group shares plummeted 6.8 percent to 233,000 won ($195) on Monday. They rebounded 2.79 percent on Tuesday, but shares in other subsidiaries are down.

Chung, heir apparent to his father Chairman Chung Jae-eun, has been uploading anti-communist posts to Instagram since November, with particular recent use of the word "myulgong," meaning crush communists in Korean.

On Jan. 5, Chung uploaded a photo of a hangover cure product and the caption “I will fight to the end! Myulgong.” It was taken down by Instagram for going against community guidelines regarding physical violence, but later restored.

More posts followed, including a screen grab of an article condemning Korea for not standing up to China, which he hashtagged myulgong and “KoreaForever.” Chung also posted a photo of North Korean leader Kim Jong-un, writing, “My #myulgong is no way related to China, my myulgong is only myulgong for those living above us.”

Some local media on Monday reported that Chung would stop his myulgong campaign, quoting a high-ranking Shinsegae Group spokesperson. But he quickly proved them wrong. 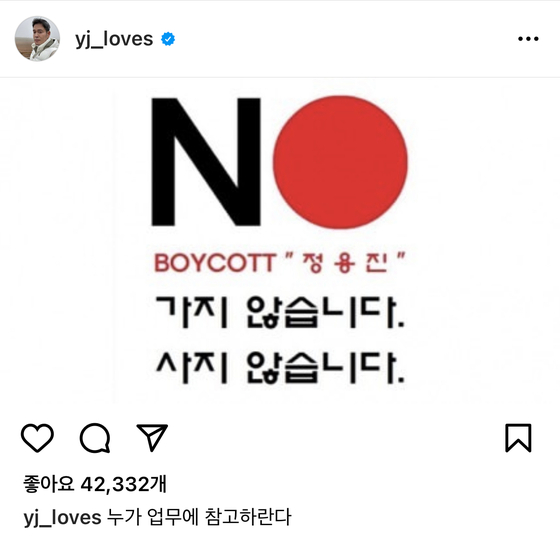 
On Tuesday morning, Chung uploaded screen grabs of articles reporting a North Korea missile test into the East Sea, captioning it with “OO.” Many believed this to be a symbolic reference to myulgong, a two letter word in Korean. The post was later deleted.

He also uploaded an image used by his critics calling for a boycott of Shinsegae with the caption, "Someone said I should take this into consideration."

Chung's antics caught the attention of the political class, which is acutely sensitive to anything during the presidential election campaign.

Rep. Jin Sung-joon, a ruling Democratic Party (DP) lawmaker working on the campaign of DP presidential candidate Lee Jae-myung, wrote on Facebook that he will not go to Shinsegae Department Store, Emart and Starbucks, all parts of the group.

On the flip side, People Power Party presidential candidate Yoon Suk-yeol uploaded a photo of himself at Emart shopping for anchovies and beans, myeolchi and kong in Korean. When those two words are put together, they sound like myulgong.

Common folk uploaded on social media screen grabs of themselves deleting the Starbucks application or cutting their Starbucks cards in half. Many said Chung was being too political, especially considering Shinsegae's businesses in China. Emart pulled out of the Chinese market in 2017 after a geopolitical tiff over the deployment of an anti-missile system in 2016 ruined its sales. Shinsegae International's cosmetics and fashion businesses rely heavily on customers from China.

Shares have taken a tumble, but a boycott called by Chung's critics hasn't gained much traction.

On Tuesday, Starbucks Coffee accounted for nine out of the top 10 best-selling cafe gifticons, mobile coupons offered on Kakao Gift that can be exchanged for other products. The only non-Starbucks Coffee product on the list was A Twosome Place’s strawberry chocolate cake, ranking fifth.

Some customers went on social media to post photos of themselves drinking Starbucks coffee, also using the hashtag myulgong.