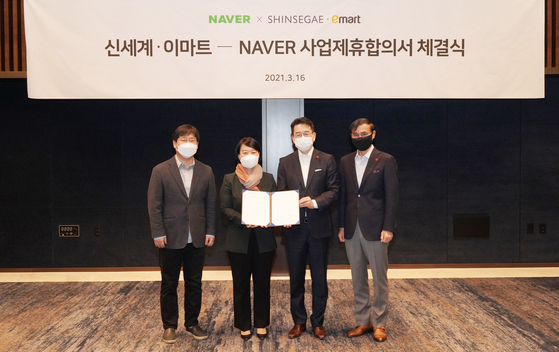 Representatives of Naver and Shinsegae celebrate a stock swap on Tuesday in southern Seoul. [YONHAP]


Naver and Shinsegae are swapping stock in a complex deal that will add to a growing web of e-commerce alliances as the already competitive market becomes more so.

A ceremony was held to mark the partnership on Tuesday at JW Marriott Hotel in southern Seoul with the key figures attending, such as Naver CEO Han Seong-sook and Emart CEO Kang Heui-seok.

While stock swaps are normally accompanied by a high level of business cooperation, the companies stopped short of detailing the rationale behind the agreement and offering specific details, saying only that the deal is geared toward strengthening business online and offline and fostering a strategic partnership.

Initial media reports said that only Emart would take part in the deal, and made no mention of Shinsegae Department Store and Shinsegae International.

Possible synergies are many and include Naver adding products from the retailers to its online shopping platform while Shinsegae taps into Naver’s digital infrastructure to access more online buyers.

The deal comes days after Coupang’s wildly successful initial public offering in New York and ahead of the sale of eBay Korea. With these deals, Naver faces significant challenges in the market from larger and better capitalized companies.

Naver is currently the largest e-commerce player in Korea. Total transactions, which include purchases of digital content like music and webtoons as well as goods, came to 20.9 trillion won ($18.5 billion) in 2019, according to mobile app analytics company WiseApp, accounting for 15.5 percent of Korea’s e-commerce turnover.