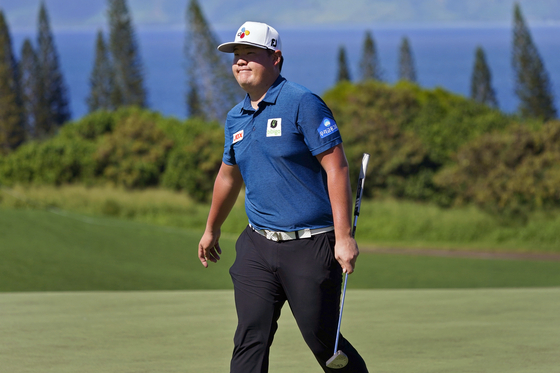 Im Sung-jae reacts after missing his birdie putt on the third green during the first round of the Tournament of Champions on Jan. 6 at Kapalua Plantation Course in Kapalua, Hawaii. [AP/YONHAP]


The PGA's Sony Open will tee off on Thursday at Wai'alae Country Club in Hawaii, with Korean golfers Im Sung-jae, Kim Si-woo, Lee Kyoung-hoon and Kang Sung-hoon vying for the trophy.

The Sony Open has existed in its current form since 1999, although the tournament has been held under a number of names at the Wai'alae Country Club since 1965. The Open was held without an audience for the first time last year, when Kevin Na of the United States took the trophy carding 21-under-par, one stroke over countryman Chris Kirk.

Last year, the best finish by a Korean golfer at the Sony Open was Lee tying for 19th, while Kim finished 25th. The only time a Korean has won the Sony Open was in 2008, when K. J. Choi, the most successful Asian male golfer of all time, took the trophy. Before that, Choi also tied for seventh in the 2002 edition and for fourth in 2007. 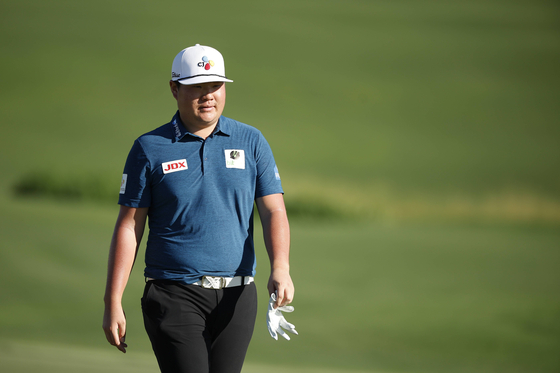 Im Sung-jae walks up the 18th green during the first round of the Sentry Tournament of Champions at the Plantation Course at Kapalua Golf Club on Jan. 6 in Lahaina, Hawaii. [AFP/YONHAP]


But this week, Im is the top Korean golfer on the PGA Tour.

Im is currently fourth on the FedEx Cup rankings, with Kim following at 47th, Lee at 60th and Kang at 114th.

The PGA Tour is staying in Hawaii for a second week following the Sentry Tournament of Champions, where Im finished tied for eighth, and the top-ranked Korean will be looking to carry that form into the second week of the Hawaiian swing.

At the Sentry Tournament, Im had the best finish of the three Koreans competing — Kim tied for 23rd and Lee for 33rd.

Im's eighth-place finish was his second successive top-10 finish in the Sentry Tournament. Of the three Korean golfers, Im is the only one to have played the 2020-21 Sentry Tournament of Champions. He earned his seat at that event by winning the 2020 Honda Classic on March 1, 2020, and finished tied for fifth, carding a 21-under-par, 271, alongside Xander Schauffele of the United States.

Im is also the only Korean player on the PGA Tour with a win this 2021-22 PGA season. Im has now played five events in the 2021-22 PGA season that started in September last year and won a trophy in his 100th start, the Shriners Children's Open on Oct. 10 last year at the TPC Summerlin in Las Vegas, Nevada. It was his second PGA Tour title.

Im has a good chance at the Sony Open. Not only does the course favor strong iron golfers like Im, but a number of the world's top competitors like Jon Rahm, Collin Morikawa, Dustin Johnson, Patrick Cantlay, Justin Thomas and Bryson DeChambeau have opted to sit out the tournament.

Compared to the Plantation Course at Kapalua, where the Sentry Tournament took place last week, the Oahu course is flatter and has less winds or water hazards. The courses are designed so that ball-striking and accurate putting are more important than distance. The last three golfers to take the title, Na, Cameron Smith and Matt Kuchar, rank at No. 171, No. 87 and No. 186 in driving distance.

Im is somewhat behind in driving distance, at No. 62, but is No. 11 in scoring average. The fact that Im is No. 2 in scrambling demonstrates that he is a strong iron player because his 78.82 percent scrambling rate means that even when he missed the green, he is able to make par or better 78.82 percent of the time. Im is also tied for No. 12 for greens in regulation, with 76.39 percent of his balls landing within putting distance of the hole in as many or fewer than the number of shots for par. 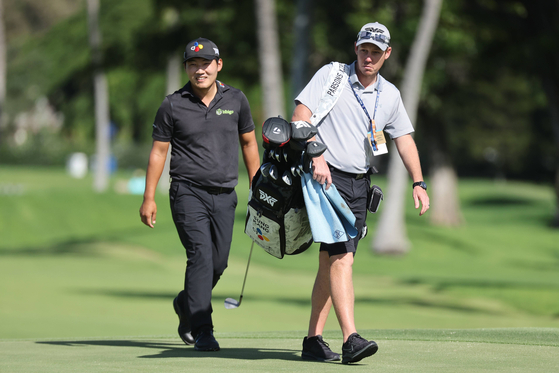 Kang Sung-hoon walks with his caddie during a practice round prior to the Sony Open in Hawaii at Waialae Country Club on Tuesday in Honolulu, Hawaii. [AFP/YONHAP]