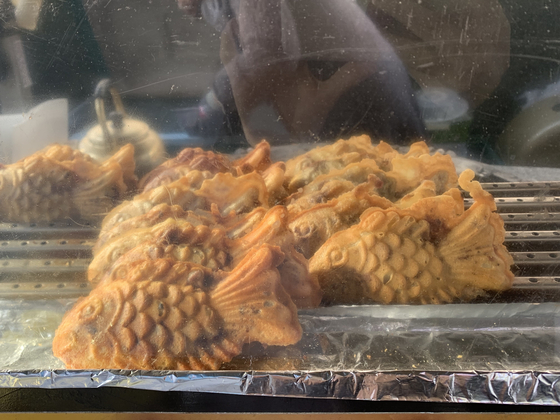 Bungeoppang with red bead filling are ready to be sold at a stand in Bundang District, Gyeonggi. [LEE JIAN]


You have to demonstrate extreme restraint to get a waft from a sweet bungeoppang stand and not at least steal a quick glance underneath the tarp of the seller.

Bungeoppang (pronounced boong-uh-ppang), which can be literally translated to “carp bread,” is a fish-shaped winter snack with red bean filling encased in a sweet batter that is cooked inside a closed pan until golden and crisp on the outside.

Arriving in Korea during the 1930s, bungeoppang is believed to have originated from a similar Japanese snack called taiyaki, which takes the form of a snapper instead of a carp, according to food and culture critic Yun Deok-no.

The snack is said to be in the shape of a fish because fish like carp and snapper were common but expensive proteins that many people at the time could not afford. So, they made a snack that looked like the fish and settled for eating that instead.

Since then, the snack has evolved to feature several different types of filling. Most commonly, stands nowadays offer the choice of choux cream in addition to the traditional red bean filling.

A few stands have taken it a step further and sell high-end bungeoppang with more diverse fillings such as sweet potato, or savory offerings like pizza and kimchi. 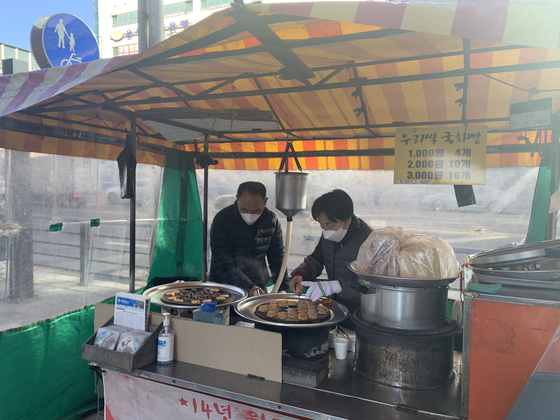 
There are also different species of fish that form the snack’s exterior — Bungeo or common carp and Ingeo or Crucian Carp — though it is nearly impossible to tell them apart in their battered form.

The argument, made by Song Joong-ki’s character Vincenzo in TvN drama series “Vincenzo,” is that the shape of the mouth of the two snacks are different.

Jeon Yeo-been’s character Hong Cha-young disagrees and says that the difference lies in the batter that is used. 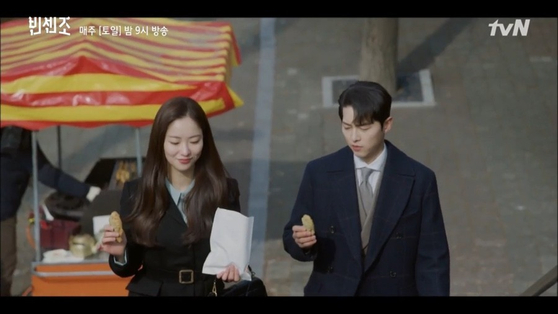 
“Ingeoppang (Crucian Carp bread) is made with a type of dough which creates a thinner and crispier exterior than bungeoppang,” says Jeon during a scene in “Vincenzo.”

Jeon is right. Ingeoppang is made with a thinner batter which makes the body of the fish appear slightly more translucent than bungeoppang.

But fish variety aside, the taste remains mostly the same as the hot filling oozes out of the crispy dough with each bite.

They arguably taste better imagined than actually eaten, but it would be a shame to go through a winter in Korea without having at least one bungeoppang.

However, the bungeoppang stands that used to line the entrances to subway stations and streets, are becoming harder and harder to spot.

A major reason for the shutdowns was lack of profit.

“We found that many street food vendors closed up shop either because they were not making enough profit or they have retired from the business due to old age or sickness,” said Do Hyeong-tae, an official at Seoul Metropolitan Government.

Do added that the actual number of stands that have gone out of business is likely much higher as there are many that have not registered their business with the government.

“It’s getting harder and harder to stay in the bungeoppang business,” says 65-year-old Park Myeong-suk who has been selling the sweet treat for the last 15 years in Bundang District, Gyeonggi.

“It simply costs too much to make bungeoppang these days because everything has become more expensive.”

Costing only 1,000 won [83 cents] for a bundle of four, bungeoppang used to be the nation’s staple low-priced snack.

But since early last year, stands have raised prices, offering three or even two bungeoppang for 1,000 won.

One of the largest factor driving up bungeoppang costs is the price of gas.

Based on Korea National Oil Corporation data, propane gas — used to fuel large bungeppang pans and stoves — sold for 2,410.12 won per kilogram [2 pounds] in December 2021. That's up 29.2 percent on year.

Gas canister prices are set at the beginning of each month and remain the same throughout the month.

“I have to keep the gas on the entire time that I am open if I want to sell hot bungeoppang to customers,” says Park.

Prices for ingredients used to make bungeoppang have also risen.

Sixty-two-year-old Choi Sun-ye, who opened a bungeoppang stand with her husband last year in Mapo District, western Seoul, says that the rising price of gas and ingredients of bungeoppang led her to sell a different variety of the snack.

“Before opening the stand, we thought a lot about how to price the snack,” says Choi.

“We finally decided to sell the same number of bungeoppang as most stands [three for 1,000 won] but in a smaller size.”

Mini bungeoppang are about half the size of a regular bungeoppang which are usually about 12 centimeters long (5 inches).

The Covid-19 pandemic is another factor that is adding on to the hardships of bungeoppang vendors.

“Because of Covid-19, there are not as many people on the streets,” says Park.

“I used to keep the stand open until 10 p.m., but I close at 8 p.m. now because there is no one out on the streets, especially at night. So there is no point keeping the stand going.”

As a result, Park’s sales have been slashed by almost half.

“A few years ago, I used up seven or eight bags of bungeoppang mix,” Park says. “These days, I go through only four, maybe five on a good day.”

Bungeoppang mix is a mix of dry ingredients needed for the batter. One bag weighs 20 kilograms.

Yet, there are still people, especially those in their twenties and thirties, who crave and love the snack.

“There used to be three bungeoppang stands near my apartment, but over the years, they have all closed down,” says Kim Ji-hyeon, 26, who lives in Seodaemun District, western Seoul.

“Now, whenever I spot a bungeoppang stand, I always purchase the snack because I don’t know when I am going to run into another one!”

A bungeoppang stand tracking app, “Three thousand won inside my pocket” (translated) recorded over 140,000 downloads since its launch in 2020. The name of the app refers to the common Korean phrase that during winter, one must carry some cash in case you get a sudden craving for a bungeoppang because sellers don't accept credit cards.

“Our team thought the app would be very useful, especially as people usually look for these stands during winter when it is very cold outside,” says Yang Hyo-jeong, one of its developers, during an interview with public broadcast service MBC’s Youtube channel 14F.

“Three thousand won inside my pocket” operates by enabling its users to register their nearby winter snack stands on a satellite map and share the information with others. It does not charge street vendors any fees. 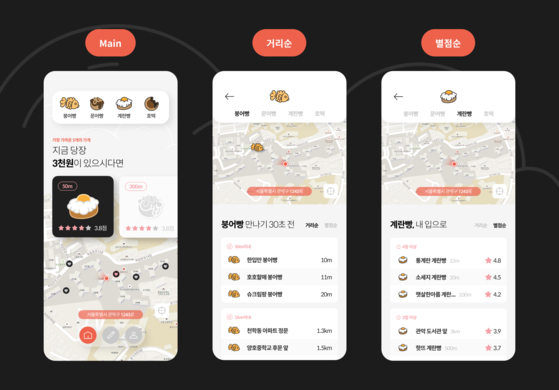 
“The service is really useful because now, I don't have to rely on coincidence and luck for a bungeoppang — I can just search the closest stand on my Dangguen Market app,” says Kim Kyeong-shin, a 35-year-old in Bundang District, Gyeonggi, who is a regular user of Dangguen Market’s winter snack map service.

Homemade bungeoppang have become popular this winter as well.

According to data collected by e-commerce platform Auction, sales of miniature bungeoppang pans from Dec. 13, 2021 to Jan. 12, 2022, rose 28 percent compared to the same time last year. 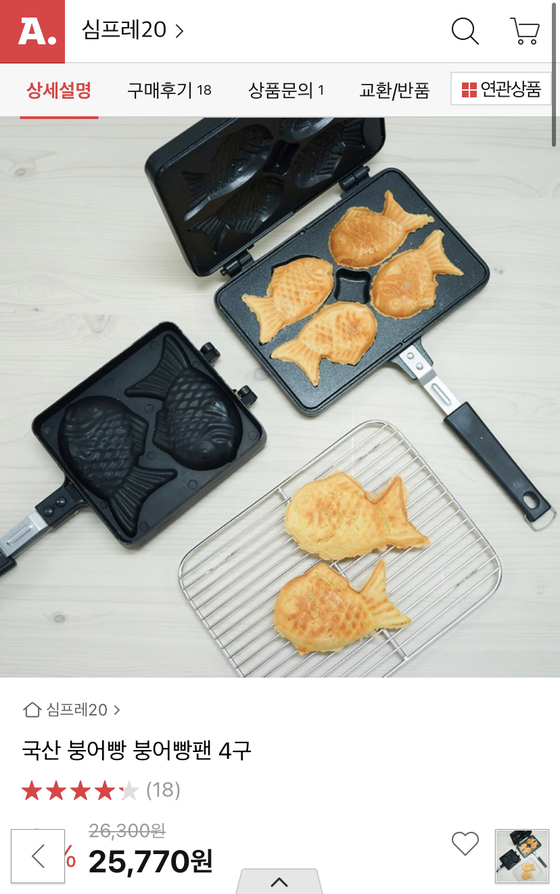 A miniature bungeoppang maker is on sale on the e-commerce platform Auction. [AUCTION]

“As temperatures drop and Covid-19 persists, people are less willing to go outside,” an Auction employee told the Korea JoongAng Daily.

“As a way of enjoying themselves indoors, it seems that many people are looking to make bungeoppang themselves.”