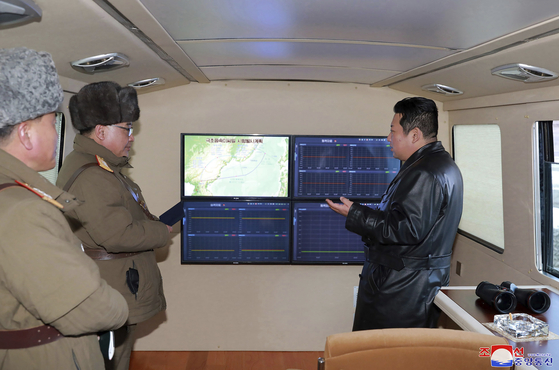 The Joe Biden administration imposed its first sanctions on North Korea Wednesday in response to a series of ballistic missile tests, while maintaining it continues to seek dialogue with Pyongyang.

The U.S. Treasury and State Department announced sanctions targeting seven individuals and a Russian entity responsible for procuring goods for the North's weapons of mass destruction (WMD) and ballistic missile programs from Russia and China.

The individuals designated by the Treasury's Office of Foreign Assets Control included six North Koreans based in China or Russia, and one Russian national.

The announcement followed tests of what North Korea claims to be hypersonic missiles on Jan. 5 and Tuesday. They are covered by the sanctions.

Under Secretary of the Treasury for Terrorism and Financial Intelligence Brian Nelson said in a statement, "The DPRK's latest missile launches are further evidence that it continues to advance prohibited programs despite the international community's calls for diplomacy and denuclearization," using the acronym for the North's full name, the Democratic People's Republic of Korea.

He added that the latest sanctions are a part of Washington's ongoing efforts to target North Korea's "continued use of overseas representatives to illegally procure goods for weapons."

The blacklisted individuals included Choe Myong-hyon, a Vladivostok-based representative of North Korea's Second Academy of Natural Sciences (SANS), who is accused of working to procure telecommunications-related equipment from Russia. Four China-based North Korean representatives of organizations working for SANS located in Dalian and Shenyang were designated for procuring materials including steel alloys, software and chemicals for North Korea. SANS has been sanctioned by the United States since 2010 for supporting North Korea's weapons programs.

The U.S. State Department also designated Moscow-based North Korean O Yong-ho, Russian national Roman Anatolyevich Alar and a Russian company Parsek LLC, and accused them of "having engaged in activities or transactions that have materially contributed to the proliferation of weapons of mass destruction or their means of delivery."

Parsek LLC in Moscow, according to the State Department, is a "key source of missile-applicable goods and technology" for North Korea's missile program.

O Yong-ho was accused of procuring dual-use items such as aramid fiber, stainless steel tubes and ball bearings from third countries between 2018 and 2021 on behalf of North Korea's Rocket Industry Department.

He was said to have worked with Parsek LLC and Alar from at least 2016 to "procure multiple goods with ballistic missile applications." Alar was accused of providing O with instructions for creating solid rocket fuel mixtures.

Their assets in the United States will be frozen and American companies will not be able to do business with them.

The Treasury's announcement came hours after North Korean state media reported Wednesday that leader Kim Jong-un oversaw a successful test of a new hypersonic glide vehicle that hit a target 1,000 kilometers away on Tuesday, which he claimed would greatly increase the Pyongyang's "war deterrent." This marked the first time Kim personally supervised a missile launch since March 2020.

U.S. Secretary of State Antony Blinken said in a statement later Wednesday, "The United States will use every appropriate tool to address the DPRK's WMD and ballistic missile programs, which constitute a serious threat to international peace and security and undermine the global nonproliferation regime."

Blinken vowed to work with U.S. allies and partners "to address the threats posed by the DPRK's destabilizing activity and to advance our shared objective of the complete denuclearization of the Korean Peninsula."

But he added, "We remain committed to seeking dialogue and diplomacy with the DPRK and call on the DPRK to engage in negotiations."

The United States is also proposing new sanctions on the North in the United Nations Security Council.

Linda Thomas-Greenfield, U.S. ambassador to the United Nations, tweeted Wednesday night that on top of Washington's latest sanctions, she is proposing more UN sanctions "following North Korea's six ballistic missile launches since September 2021, each of which were in violation of UN Security Council resolutions."

Choi Young-sam, spokesman for Seoul's Ministry of Foreign Affairs, said in a briefing Thursday that Washington appears to want to "expand sanctions under existing UN Security Council resolutions" rather than adopt a new resolution.

He continued, "It's important that the international community send a strong unified message that the DPRK must halt provocations, it must abide by its obligations under UN Security Council resolutions and engage in sustained intensive negotiations."

Price also raised the issue of human rights in North Korea and said "it is our estimation that some rethinking will need to be done in Pyongyang," noting that the regime is "inflicting tremendous hardship on their own people" by "diverting precious resources" that should be going to food, provision of basic services and public health to its ballistic missile and WMD programs.

He said the Biden administration's North Korea policy "remains unchanged," stressing that the goal remains denuclearization and a lasting peace on the Korean Peninsula and that "the only durable way to do that is through dialogue and diplomacy."