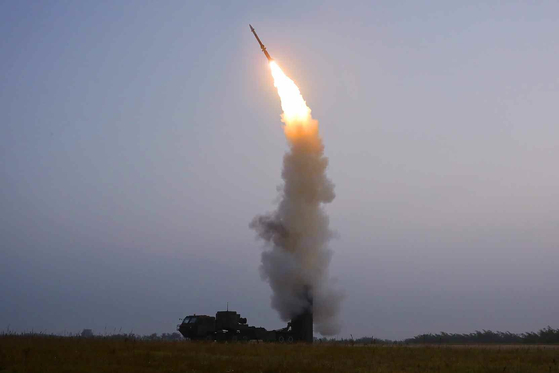 A photo of a new type of anti-aircraft missile developed by North Korea's Academy of Defense Science is released by the state-run Korean Central News Agency (KCNA) on Friday. The North test-fired it the previous day, according to the KCNA. [YONHAP]

Jo Chol-su, director of the international organization department at the North's Foreign Ministry, said in a statement carried by the state-run Korean Central News Agency (KCNA) that the UN Security Council meeting was in “open ignorance” and a “wanton encroachment on the sovereignty of the DPRK and a serious intolerable provocation against it.” He referred to the acronym for the North’s official name, the Democratic People's Republic of Korea.

The English-language statement came after the Security Council held a closed-door meeting Friday to discuss Pyongyang's latest weapons tests, including the test-firings of what the North claimed was an advanced anti-aircraft missile and a hypersonic missile. The North also fired two short-range ballistic missiles from a train and launched long-range cruise missiles last month.

The 15-member Security Council headquartered in New York convened the meeting at the request of the United States, Britain and France, but reportedly did not reach an agreement for a joint statement due to opposition from China and Russia.

Jo in the statement claimed that the North's missile tests were for "self-defense" purposes and accused the Security Council of "keeping mum" about the joint military exercises between the United States and South Korea.

He added that this is a “denial of impartiality, objectivity and equilibrium, lifelines of the UN activities, and an evident manifestation of double-dealing standard.”

Jo said that the United States, Britain and France “painted the test-launch of a hypersonic missile Hwasong-8” as a violation of UN resolutions and underscored that North Korea would never acknowledge a resolution “that seriously encroaches upon the right to existence and development of sovereign states.”

North Korea announced Friday it test-fired a new type of anti-aircraft missile the day before.

The test launch was reportedly guided by Pak Jong-chon, a member of the Presidium of the Politburo of the ruling Workers’ Party, with other defense and science officials. North Korean leader Kim Jong-un was not present.

“The introduction of important new technologies, including twin-rudder control technology and the double-impulse flight engine, has proven the remarkable combat performance of the new anti-aircraft missile, which features rapid response, guided accuracy and a substantially-increased effective range of the missile,” the KCNA said.

It added, “This comprehensive test will be of great practical significance toward the research and development of the highly anticipated anti-aircraft missile system.”

North Korea's latest missile test came two days after it tested its new hypersonic missile, Hwasong-8. Hypersonic missiles reach speeds greater than Mach 5, which is five times the speed of sound or about 3,836 miles per hour. These types of missiles were developed to avoid interception by the opponent, and only a few countries are in possession of such a weapon, such as the United States, Russia and China.

Following Pyongyang's announcement, Seoul’s Ministry of Unification said it will take measures to ensure that the situation on the peninsula remains stable.

“We will continue with efforts to ensure that the situation on the Korean Peninsula is maintained stably through the restoration of inter-Korean communication lines and resumption of dialogue,” Cha Deok-cheol, deputy spokesperson at the Unification Ministry said during Friday’s briefing.

“We will closely monitor our military’s additional analysis and the North’s movements,” Cha added.

But the recent series of missile tests contradicts recent statements by the North that seemed to imply a hope for improved relations. Kim Jong-un, during his speech to the Supreme People's Assembly on Wednesday, expressed an intent to restore inter-Korean hotlines. His younger sister, Kim Yo-jong, also showed a conciliatory attitude towards the South in her recent statements.

Kim Jong-un also said in his administrative policy speech Wednesday, “We have no purpose or reason to provoke South Korea, or any idea of hurting it.”

Kim Yo-jong said in a statement Saturday that Pyongyang could take steps to improve relations with Seoul, including an inter-Korean summit and the reestablishment of the joint liaison office, if the South abandons its "hostility" and "double standards.”

The North, however, has insisted that the continued missile tests are in accordance with the five-year plan for the development of the defense science and the weapon system proposed at the Workers’ Party’s Eighth Party Congress in January, and is not a "provocation."

The North has bristled at characterizations of its weapons development program and associated tests as provocations.