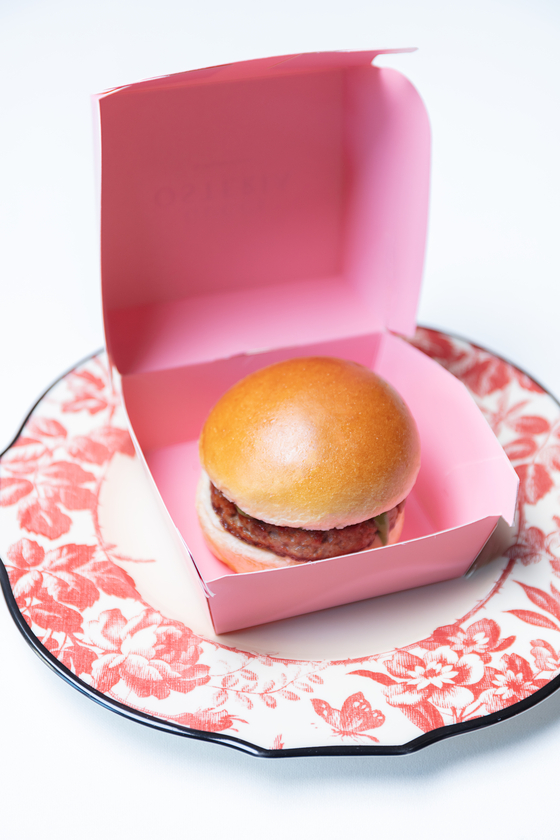 Completely new culinary ideas are to be expected from the new Italian-Korean restaurant Gucci Osteria Seoul, according to globally renowned chef Massimo Bottura, a culinary talent behind the fourth branch run by the Italian fashion house.

A Korean adaptation of a burger recipe originally made for a pop-up event in New York, made with hanwoo (Korean beef) and Italy’s parmigiano reggiano cheese, explains chef Bottura's idea behind the new Gucci Osteria in Seoul that opened last week. The dish is called the Emillia Burger, as ingredients are originally from the Emilia-Romagna region in Italy.

“Ethics and aesthetics are the one and only thing [that matters],” said chef Bottura during an exclusive interview with the Korea JoongAng Daily during his four-day trip to Seoul on the opening day of Gucci Osteria Seoul on March 28. Ethics refers to the core idea he puts into his culinary creations, and aesthetics refers to the new innovative form he takes to deliver that core idea.


Chef Bottura, of three-Michelin-starred Osteria Francescana, which has appeared at the top of many different gastronomic rankings and accolades like the World’s 50 Best Restaurants since its opening in 1995, uses his experiences to shape a more abstract or contemporary vision for the future. This time the burger is his muse, delivering his idea to diners in Korea in the form of a juicy patty between two buns, on the top floor of Gucci Gaok, the fashion house’s flagship store in central Seoul’s Yongsan District. The restaurant offers course meals and dishes à la carte. 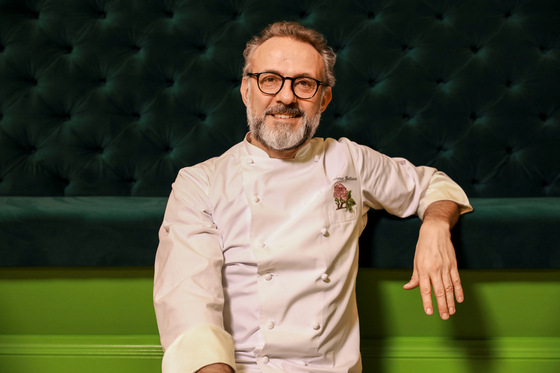 The Italian fanfare in Seoul is the fourth establishment, with branches already in Florence, Los Angeles and Tokyo. The collaboration first bloomed with the friendship that started between Bottura and Gucci CEO Marco Bizzarri on their first day of high school in 1975.

When deciding to work with his friend, Gucci was taking the approach of “bringing the best from the past to the future and looking at the past in a critical way, not in a nostalgic one,” Bottura said. “It was exactly [the same] as my approach to Italian cuisine. It’s the way to renew the tradition.”

“The collaboration between Osteria Francescana and Gucci came so naturally to us because we breathe energy into them and they breathe energy into us. It is more than two leaders of our own businesses in the fashion and food industry [working together].” 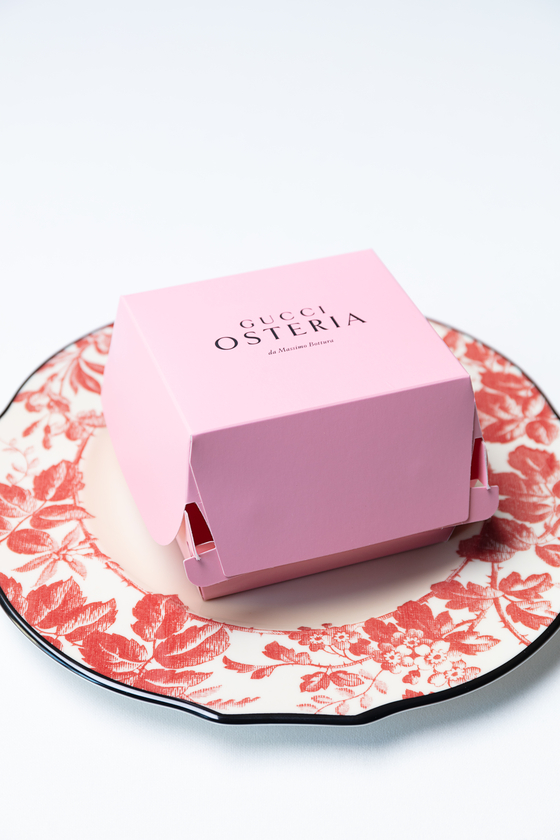 
The idea of making a burger, a food generally known to be American, for the signature dish at all Gucci Osteria branches comes from an epiphany Bottura had in 2014 during a Shake Shack pop-up in New York. After the Italian chef’s burger at the American burger joint in Madison Square Garden saw huge success by selling some 1,500 burgers in about an hour, Bottura said he gained more “self-confidence” that his culinary ideas work in the market: something Italian, but far from being authentically Italian.

“[One food industry entrepreneur] said it would be a great marketing strategy [for an Italian restaurant in New York to have] an Italian chef come to the United States and make the burger better than [other American chefs], and that phrase stayed in my mind,” said Bottura. He added that Danny Meyer, the founder of Shake Shack, was excited by and satisfied with his creation for the New York event.

Before, Bottura said he often found burgers to be too dry, especially the patty. He decided to melt gelatin in with the beef — the same as what’s found in Italian cotechino sausages, to make a juicy patty — and add the Italian cheese parmigiano reggiano. He then made a salsa verde with chopped parsley and herbs mixed with balsamic vinegar. 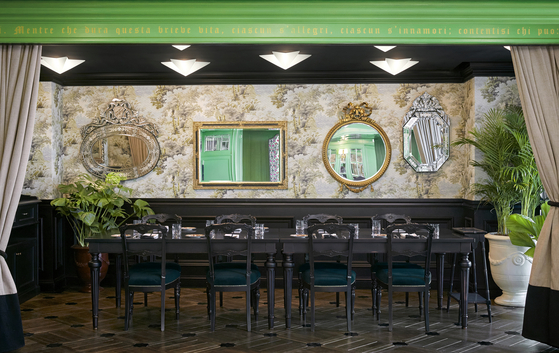 
“To me, when I create, I compress my passion into edible bites. Passion and history, filtered by the contemporary mind, is the idea behind my food. Even if it’s totally abstract, it is deeply Italian,” he said, adding that what he does is “contemporary and reflects the time [in which] we are living.”

Chef Bottura also finds similarities in the style of what he does and what Korea has been doing to promote its culture. He calls the cultural wave Korea has been building in the international community, especially with dramas and films, the “super avant-garde,” for reformatting Koreans’ childhood games for new purposes such as in the “Squid Game” series. He even shared a photo taken with “Squid Game” star Lee Jung-jae in the terrace of the Gucci Osteria Seoul.

The digital façade of Gucci Gaok, done by Korean sculptor Seungmo Park, gives a futuristic, "out of this world" feel, Bottura said. The wall has a green background with shadows of trees, which builds up to the experience once you get in the restaurant, he said. 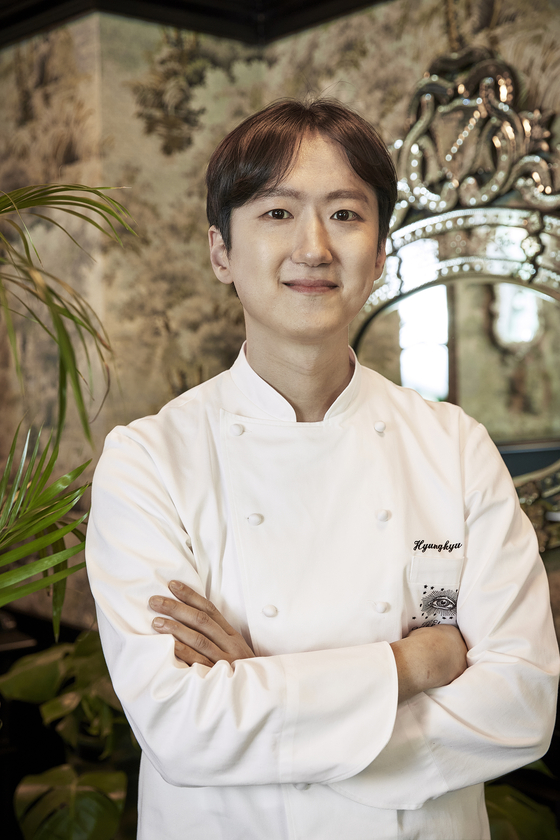 
Bottura is looking for the next “super avant-garde” dish that mixes Italian and Korean cuisine. With his team in Seoul and Florence, including executive chef Karime Lopez of Gucci Osteria Florence, executive chef Jun Hyung-kyu and head chef Davide Cardellini of Gucci Osteria Seoul, Bottura is on the hunt. He learned about a Korean double boiler machine called jungtanggi that ferments fresh garlic and turns it black after cooking it for a long time, and now he is set on fermenting cauliflower and turning it black using the machine, to get even more intense flavors. 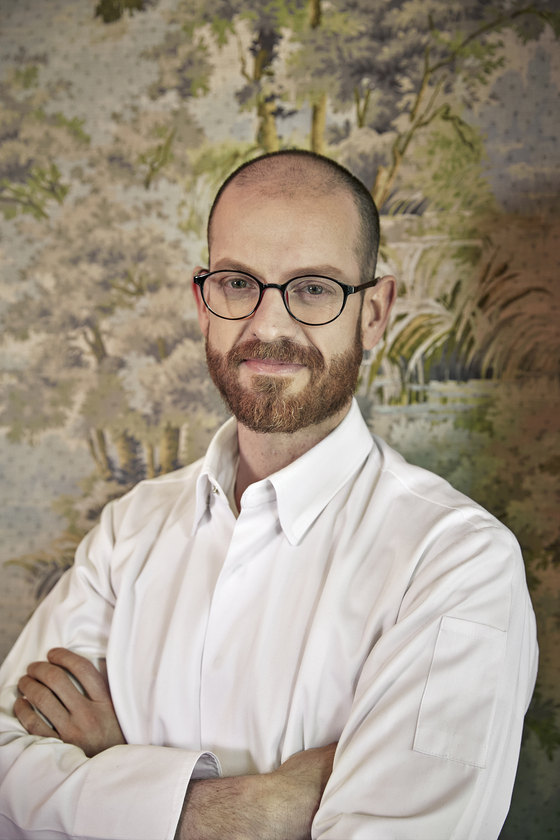 
“We have this Korean machine [in which we will] put very Italian products like white cabbage and lemon [so that what] comes out is Korean-style Italian products [to show] a very interesting way of doing things,” said the chef. “Food is creative. We are going to start from using quality products and techniques to [make] the ingredients sublime, not the ego of the chef.” 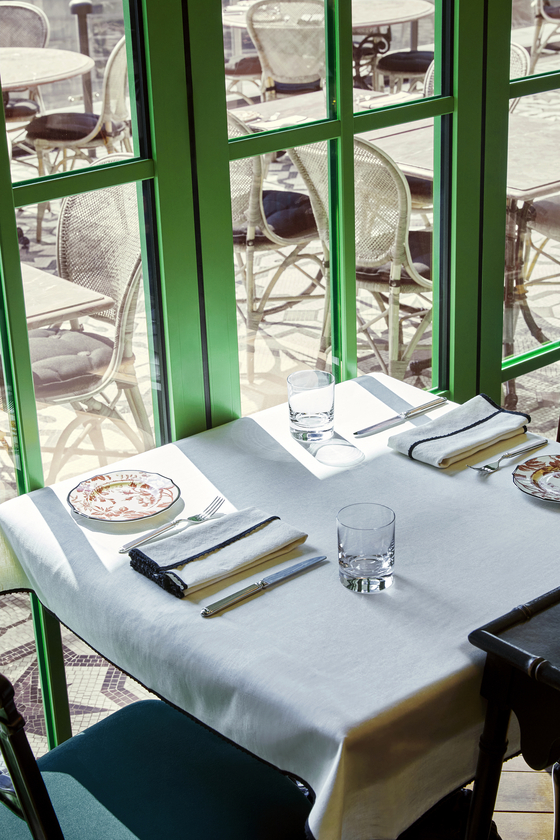 
Now available with more Korean influence is a dish called frinata. Inspired by Korea’s buggumi, a type of pancake whose dough is made of different grain powders, the team used chickpeas to make buggumi, topped with the famously Italian stracciatella cheese.

He’s done the same before with his team at the Tokyo and Los Angeles branches.

“When the team has to decide on something they are not sure about, they ask me for ideas on how to change things, and that’s when I, after 38 years of experience, can give them a suggestion,” Bottura said. 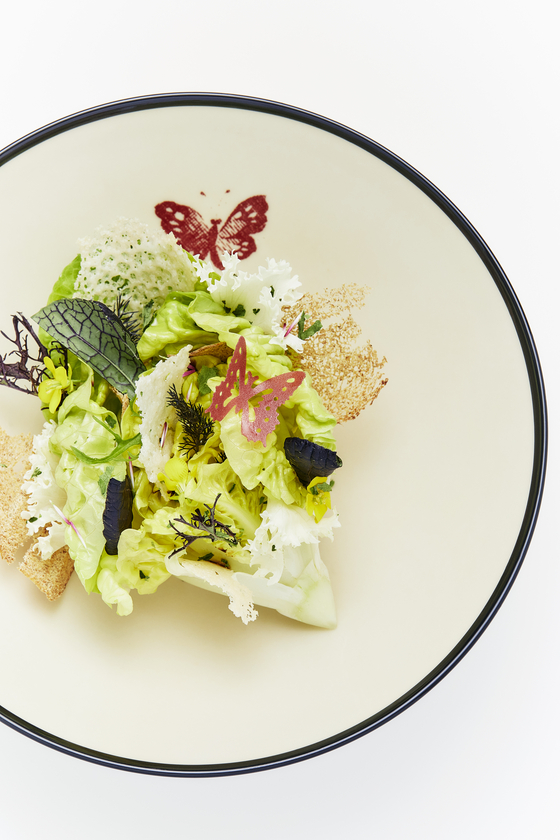 
Each branch has dishes that highlight the local ingredients, but with a twist. Hokkaido sea scallops, often used as an appetizer, have been turned into a dessert in the Tokyo branch, and Californian sea urchins and clams were the inspiration for a modified version of the classic Italian carbonara with pancetta.

“I pushed the team to move scallops [to be served] as dessert and imagine using smoked clams as pancetta and juice inside the sea urchin to make the creamy sauce,” said Bottura. “[It was something] completely [crazy] because it is unexpected. To me, one of the most important things is to not get lost in the everyday [stereotypes], but to always keep the door open for the unexpected.”

“[What is] unexpected is what really makes you different — what makes you crazy in a very good way.”