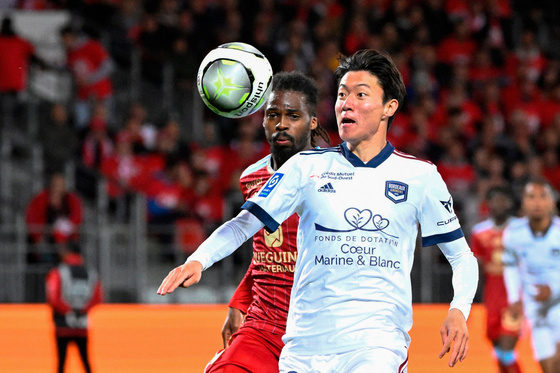 Bordeaux's Hwang Ui-jo, right, fights for the ball with Brest's Jean-Kevin Duverne during a game at Stade Francis-Le Ble in Brest, France on May 21. [AFP/YONHAP]


Bordeaux top scorer Hwang Ui-jo is practically guaranteed to move to greener pastures this summer as the French club plummets from the first to third tier and faces an increasingly uncertain future.

Hwang has long been a transfer rumor favorite and is often suggested as an easy way for Bordeaux to make some much needed money.

In the summer of 2021, Hwang, who had been Bordeaux's top scorer in the 2020-21 season with 12 goals, was linked to clubs across Europe, with a last-minute deal with either an unnamed wealthy Russian club or Portuguese club Sporting Lisbon apparently falling through in the dying hours of the transfer window.

In January, Hwang was again expected to make a move, although a flurry of goals — including a hat trick against Strasbourg on January 23 — effectively closed that window.

Hwang's popularity as a possible transfer is largely a matter of economics. Although a crucial part of the Bordeaux attacking lineup, Hwang has been seen in the past as an easy way for cash-strapped Bordeaux to make a quick buck, with even the official Ligue 1 website listing him as one of the top players to watch during the summer transfer window.

With Bordeaux relegated all the way to the third tier due to financial issues and the rumored possibility of the club declaring bankruptcy, the need for that trade is more obvious than ever. Among the clubs that have been linked to the striker are French sides Nantes, Montpellier and Marseille, as well as Premier League club West Ham.

French media reports suggest that Nantes is currently most serious in its pursuit of Hwang, with some reports saying the club has already begun talks with Bordeaux.

If Bordeaux is facing bankruptcy, with owner Gérard López telling reporters he didn't think the team would survive the move to the third tier, that could complicate a potential move for Hwang. If Nantes, for example, are seriously interested, the club could choose to hold off on making an offer until Bordeaux's financial status is clearer, hoping that the club does go bankrupt and they can swoop in and claim Hwang without having to pay any compensation.

Is this the end of the road for Bordeaux and Hwang Ui-jo?