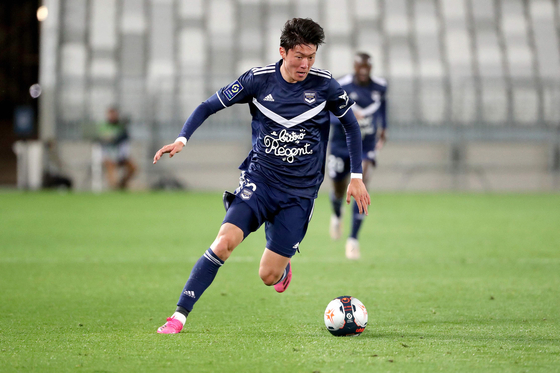 
Bordeaux have reportedly accepted a last-minute 14-million-euro ($16.6-million-dollar) offer for star Korean forward Hwang Ui-jo, although the move has not been confirmed as of press time with the transfer window set to close overnight.

French journalist Clement Carpentier reported on Monday afternoon that, according to an unnamed source, Bordeaux had finalized a deal for Hwang, who led the clubs in goals last year. Neither Carpentier nor the subsequent French reports had any information on where Hwang is headed.

If true, Hwang's move will have been confirmed on Tuesday in France, or by the early hours of Wednesday morning in Korea, before the transfer window closes. As of press time, no further information had been released by Bordeaux, Hwang's agency or French media.

Hwang still has two years left on a four-year deal with Bordeaux, where he has been hugely successful. Despite that, the Korean forward has been linked to transfer rumors all summer as his cash-strapped club was in desperate need of funding.

Bordeaux was placed in administration in April. The combination of the loss of revenue from ticket sales caused by Covid-19 and the bankruptcy of TV rights holder Mediapro created serious financial issues for the club, with problems worsening when American owner King Street said it would no longer support the club financially.

In July, the club was bought by entrepreneur Gerard Lopez, possibly fixing the club's money woes. Despite that, rumors of a Hwang deal have persisted as a way for the club to potentially secure a quick influx of cash.

If Hwang is moving, it could be within France or further afield — clubs in Germany and England have also been linked to the striker over the summer.

Hwang arrived in Korea on Tuesday to join the national team ahead of two World Cup qualifiers. If a last-minute move is on the cards, he presumably signed the paperwork before boarding the plane.