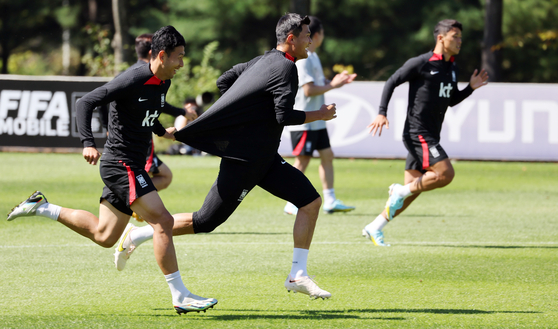 Son Heung-min, left, and Kim Min-jae train together at the National Football Training Center in Paju, Gyeonggi on Wednesday. [YONHAP]


The Korean national football team will take on Costa Rica in a friendly at Goyang Stadium in Goyang, Gyeonggi on Friday in the first of two tune-up games ahead of the 2022 Qatar World Cup.

With less than two months left before the World Cup kicks off in Qatar, Friday’s game will act as a crucial opportunity for head coach Paulo Bento to confine to refine his final squad and address any weaknesses in the current lineup.

Ranked at No. 34 to Korea’s No. 28, Costa Rica offers an interesting challenge for the Taeguk Warriors. The two teams have a very evenly-matched head-to-head record, with five wins for Korea, four for Costa Rica and two draws.

The two sides last faced each other in a friendly in 2018, with Korea winning 2-0 following goals from Lee Jae-sung and Nam Tae-hee. That game is particularly notable in recent Korean footballing history as it marked Bento’s debut with the Taeguk Warriors.

Traditionally a good attacking side, Costa Rica could prove trouble for Korea’s sometimes-wobbly defense, although the current lineup lacks international experience, with Leon’s Joel Campbell the only regular fixture in the offensive line active in an overseas club.

If the return of stalwart center-back Kim Min-jae can help ground the Korean defense, Friday’s game could provide a good opportunity for Bento to run his attacking line through some paces. There have been some changes to the squad, most noticeably with the return of in-form midfielder Lee Kang-in.

For Mallorca star Lee Kang-in, the call up marks his return to the roster after an 18-month absence. His return to the national team comes after an explosive start to the 2022-23 La Liga season that saw him beat his offensive record for the entirety of the 2021-22 season in just five matches. The young Korean midfielder now has three assists and a goal in six appearances.

"I always believed that as long as I played well in La Liga and proved I could be an asset to the national team, [Bento] would pick me," Lee told Yonhap on Wednesday. "I will try to prove to the coaching staff and my teammates that I can contribute a great deal to the team. If I can do that, I believe I will go to the World Cup."

Lee joins European stars like Son Heung-min and Hwang Ui-jo in attack for the Taeguk Warriors. While Lee joins the squad on top form — as does center-back Kim — other members of the team have had rocky starts to the club seasons.

Captain Son arrives in Korea having just scored a phenomenal 13-minute hat-trick for Tottenham Hotspur against Leicester City last week, snapping a long cold spell that had seen him go without a goal across all competitions since the start of the season. Now that drought is behind him, Son will be looking to build some momentum with the national team this week.

But will Son’s form has picked up, Hwang Hee-chan rejoins the Taeguk Warriors in the midst of a long goalless run that hasn’t seen him score for Wolverhampton Wanderers since February, a rough patch that has now lasted so long he’s been relegated to the bench.

Hwang Ui-jo, normally the front man for the Korean squad, found himself shipped off to Olympiacos this season, where he joins national team teammate Hwang In-beom. The pair have picked up a goal apiece this season, but are yet to look truly comfortable in the Greek league.

The Taeguk Warriors have had an up-and-down year, most recently suffering a humiliating 3-0 loss to Japan at the EAFF E-1 Football Championship in July.

That game was played without the likes of Son, Hwang Ui-jo and Kim, who, along with a host of other Europe-based players, were on duty with their clubs. The lack of the majority of the starting XI goes a long way to explaining the loss, but it still highlighted two major issues for Bento: A lack of depth in the squad and a very shaky defense.

Earlier in the summer, Korea played a series of friendlies with some more encouraging results. After taking a tough-but-expected 5-1 loss to Brazil at the start of June, Korea went on to beat Chile 2-0, draw 2-2 with Paraguay and beat Egypt 4-1.

In fact, after a very busy year for Korean football, the Taeguk Warriors are currently sitting on nine wins, one draw and three losses since Jan. 1. Many of those games were against soft targets like Moldova and Iceland, but six opponents do rank in the top 50 on the FIFA World Ranking and three of them have qualified for the Qatar World Cup.

Korea’s biggest win of the year was a 2-0 win over Iran in a World Cup qualifier in March, marking the only time this year the Taeguk Warriors have toppled a higher-ranked team. Iran is headed to Qatar, as are Brazil and Japan, both of which handed Korea a loss earlier in the year.

Among the FIFA top 50, Korea also beat Chile and Egypt, although neither team has a ticket to the World Cup.

Friday’s game against Costa Rica will kick off at 8 p.m.