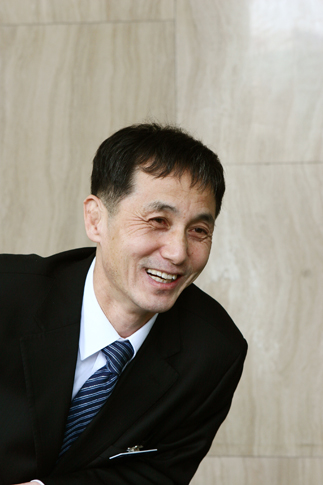 “Last year, we sold our house in Anyang and leased a house at Gwacheon,” said Tak Jeong-sik. “We wanted to give our children more space to play and run around in, as they were growing too big for our last house.”
There is not a single trace of regret on Mr. Tak’s face, even though this is a time when owning a house has become a priority for so many.
He seems glad that his son and three adopted children now have enough space in which to run and play freely. Two of his adopted children are handicapped with disabled limbs.
Mr. Tak says he was celibate until he was 39. That’s when he met his wife, Kang Soo-suk. At the time, Ms. Kang was planning to become a nun and took care of orphaned children at the church where she worshiped.
After they married, she said that she would like to adopt orphans. She gave birth to their first child five years after they married, but that did not change her mind.
In 1999, when their son turned three, the couple adopted a baby girl from an orphanage in Gimcheon, North Gyeongsang province.
Once they adopted their daughter, they were ready to adopt more. Five years later, the couple adopted a child with no fingers from Kkotdongnae, a social welfare center, in Eumsung, North Chungcheong province. Last year, they adopted a four-year-old boy with a serious mental handicap.
Raising four children, especially when two of them are handicapped, is a difficult task. “I do not wish to adopt more. It is hard on my wife,” Mr. Tak says.
Ms. Kang’s view is different. She was awarded a literary prize by a newspaper company before she married. Immediately after their marriage she taught Dado, the traditional tea ceremony, at Myeongdong Cathedral and she worked as an essay teacher for children.
However, since their second adoption, she stopped these other activities and became a full-time mother.
Mr. Tak feels sorry for his wife, but she is determined to adopt more children. A couple of weeks ago, she visited Holt Children’s Services and filed an adoption application. “She can be very stubborn sometimes,” Mr. Tak says with a smile. Adopting their fourth child is now almost finalized.
Ms. Kang’s calling, as well as the fact that Mr. Tak is a descendent of an independence movement activist, is the main reason behind their decision to adopt. The government provides educational fees for all descendants of independence movement activists.
Mr. Tak’s father was arrested while participating in the independence movement, and served two years in prison. Mr. Tak receives 1.2 million won ($1,250) monthly from the government. However, it is still not an easy task to raise four children with an annual income of around 30 million won.
The couple cannot recall the last time they bought new clothes for themselves. But that is not their concern.
“Those who adopt children with mental disabilities are the ones who need to be honored,” Mr. Tak said. “They face more difficulty than parents of physically handicapped children. Overseas adoption has become more difficult, and we are worried about whether it will be possible to take care of this kind of child in Korea.”
Mr. Tak was recently chosen as an “Honorable Civil Servant” by the Ministry of Government Administration and Home Affairs and was given the Minister’s Award on Feb. 1.