[Interview]Information is key to unification

[Interview]Information is key to unification 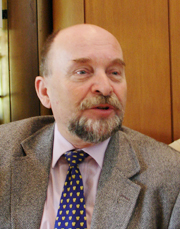 Keep collecting information about the Kim Jong-il regime’s crimes against humanity, then gather even more of it after the two countries unify.
That’s the suggestion of Rainer Eppelmann, president of the Stiftung Aufarbeitung, Germany’s state-run organization devoted to the examination and reappraisal of the communist dictatorship of East Germany.
He said that judgments about North Korea must be made with help from the North Koreans. “The two Koreas must address the issue together after unification and that is the most important point.”
The two countries can then decide together what to do, he said.
In an interview yesterday, Eppelmann said West Germany built a database of information on communist East Germany’s rights abuses, but the charges weren’t reviewed until after unification.
Eppelmann, who was the last defense minister of East Germany, was in Seoul this week to attend a German-Korean workshop with the Institute for Peace Affairs.
Eppelmann, also a Protestant pastor, supported the democratic uprising in East Germany in 1989. His church provided shelter to many activists, Eppelmann said.
He said the media are the most powerful tool for unification, and the reunification of Korea can be achieved when more information about the outside world reaches North Koreans.
“I still vividly remember my interview with a West German journalist 30 years ago, when the country was still divided,” Eppelmann said. “He wrote an article with his true heart, and later he provided me with newspapers where the article was published. By reading other articles in newspapers, the people learned about the better quality of life outside East Germany.
“Seeing the quality lives of West Germans, the people began thinking that they wanted to live like that,” he said. “When more and more information came through, the East Germans’ desire to live in a capitalist democratic society grew and that prompted the changes from inside.”
Eppelmann said that also applies to North Korea. He said the efforts by South Korea and others to reach North Korean citizens through the radio are a valuable tool. He also urged journalists to write more about North Korea’s rights abuses and enlighten North Koreans about the lives they can enjoy when the dictatorship falls.
The engagement policy toward the North, despite criticism that it has extended the Kim Jong-il regime, is still the way for unification, Eppelmann said.
“The very same dispute existed in Germany 30 years ago, but West Germany’s engagement policy was the only realistic option,” Eppelmann said. “If the Cold War were to continue, the situation would have gotten worse, and East Germany’s economic hardships would have been more serious. In the end, peaceful unification would have been impossible and it could have led to a potentially bloody unification.”