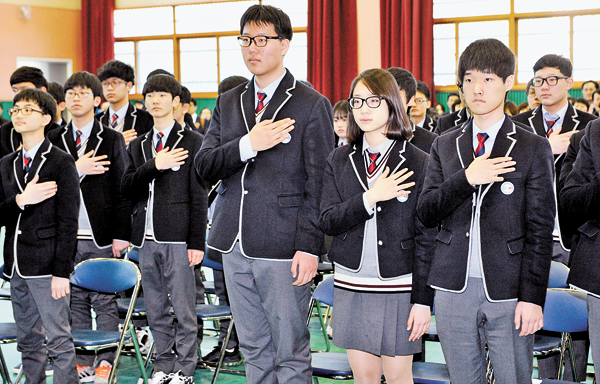 Daedeok Software Meister High School had its opening ceremony on March 2 in Daejeon. By Kim Seong-tae

A secondary vocational school specializing in software education and programming has opened its doors in Korea, with competition for admission much higher than anticipated.

Daedeok Software Meister High School held an opening ceremony earlier this month in Daejeon, according to the Ministry of Education, with 264 candidates applying for 80 total seats.

The school was established amid a rise in what are known as Meister high schools - converted vocational schools that partner with certain companies to tailor their curriculums and courses around the demands of the work force - and as part of measures by the central government to improve software education.

The opening of the school was included in the software education plan announced in July by the Education Ministry.

The school’s curriculum focuses on business experience, and major IT companies and national institutes, including Samsung SDS, the Korea Advanced Institute of Science and Technology (Kaist) and the Electronics and Telecommunications Research Institute (ETRI) are associated with the school in terms of vocational training.

Meister high schools aim to provide students with high-level vocational training, industry-customized education and the latest technology skills. There are currently 38 such institutions nationwide, with three more scheduled to open within the year.

Despite the country’s high unemployment rate, secondary vocational school graduates tend to be successful in navigating the work force because they possess relevant skill sets in high demand.

According to the Korea Employment Information Service, 89 percent of Meister high school graduates were employed in 2013.

“A lot of companies are considering hiring more students who have graduated from Meister high schools,” an official from the Education Ministry said on the condition of the anonymity, citing the high employment rate.

As well as a reputable employment record, these software schools also seem to generate alumni who can perform remarkably well in the job market.

The new high school has already signed contracts with 72 companies to employ 200 of its future alumni.

Park visited Gewerblich-Industrielle Berufsschule, a vocational school, during a visit in January 2014, to Bern, Switzerland.

Following the trip, Korea and Switzerland signed a memorandum of understanding (MOU) in which 20 Korean students who graduate from Meister high schools and land jobs at Swiss companies operating in Korea will be given a chance to be trained domestically for a year, then for two years at business headquarters in Switzerland.