After Eric Loomis was arrested in 2013 in the state of Wisconsin on five felony counts in a shooting case, he was tried and found guilty of two.

For his sentencing, the judge took the unusual step of consulting a computer system called Compas.

Compas was developed by Northpointe, a U.S. legal solution provider. It assesses the risk of a convict repeating his crime based on data-driven algorithms. Compas concluded that Loomis - a registered sexual offender - was at high risk of repeating his offense. The judge sentenced Loomis to six years in jail.

Loomis appealed, arguing that the court had violated due process by using Compas. Last year, the Wisconsin Supreme Court ruled that use of an algorithmic assessment was not a violation of the defendant’s due process rights.

The case demonstrated a convergence of information and communication technologies (ICT) with a legal system - a final call in a legal case was based on input from an artificially intelligent agent.

“Advanced forms of the legal system are being adopted more and more by countries such as the United Kingdom and the United States with the rise of technologies such as artificial intelligence and algorithmic assessment,” said Rhim Young-yik, head of Intellicon Meta Lab, an AI research lab.

The idea of artificial intelligence replacing a human judge completely still seems dangerous or at least highly premature. But the rise of legal technology, also known as “legal tech,” is stirring up controversy in the conservative legal industry both in Korea and abroad.

What it promises is more affordable, transparent and advanced forms of legal services than those done by mere mortals.

Legal tech and its significance

“The introduction of technologies had been slow in the legal industry in comparison to other knowledge-based service sectors,” wrote Jeon Hye-young, a senior researcher at Hyundai Research Institute (HRI), in a recent report. “But the development of ICT has accelerated the fusion of legal service and technologies, creating new values [increasing the efficiency of legal services as well as their quality].”

The HRI report categorized four different fields that will benefit from the convergence of technologies and legal services: legal research, lawyer research, e-discovery and consulting.

Legal research refers to the process of tracking down information such as past cases, precedents and related laws to build a case. Lawyer research is a process of finding lawyers specializing in the field of the client’s interest. E-discovery, which is most common in the United States and United Kingdom, refers to the phase where parties on both sides of a lawsuit provide each other their evidence and submissions electronically.

Stanford Law School started the CodeX project in 2010. It is studying “the research and development of computational law - the branch of legal informatics concerned with the automation and mechanization of legal analysis,” and is considered the pioneer of the legal tech industry. CodeX holds an annual conference to discuss how technologies may “reshape the landscape of the legal profession, the law itself, and how these changes impact us all.”

But the legal industry is conservative and slow to adopt technologies. Even it cannot avoid new services evolving from explosive technological advancements. “Combined with big data and AI technologies,” Rhim said. “Breakthroughs are taking place globally in the legal sector.”

Lew Young-moo, a computer engineer-turned-lawyer who specializes in information technologies, information protection and cyber-crime, told the Korea JoongAng Daily that AI units will become assists to human legal professionals by taking over simple and routine tasks such as document research.

“Consider this: it’s impossible for judges when making decisions to have all the related info in their heads or to go over all the documents in a short period of time,” Lew added. “This is a possible task for machines. We’ve seen the paradigm shift with AlphaGo” ? Google’s Go-playing algorithm ? “which ran through all the moves in its database to come up with the most optimal move.” That kind of calculation would have taken a human Go player nearly a thousand years, he said.

Global investment in legal tech startups has risen from $91.4 million in 2011 to $292 million in 2015, according to the HRI report. HRI predicts the global market for legal services software - which covers an array of services such as lawyer research and contract creation - will increase from $3.8 billion in 2015 to $5.7 billion by 2019. 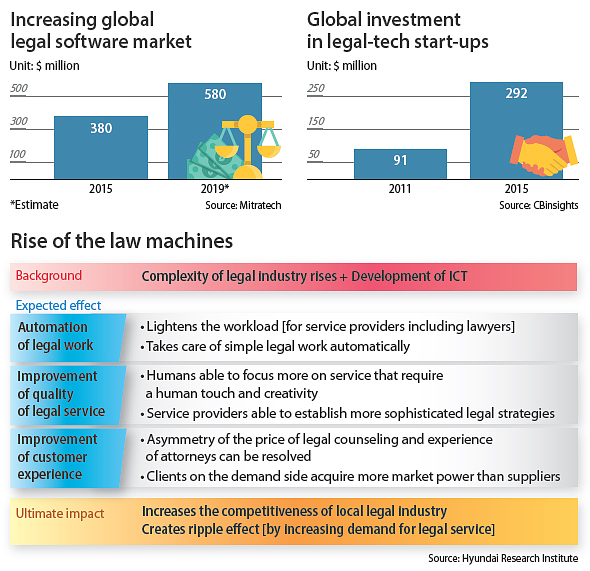 LegalZoom, a U.S. legal tech company, demonstrates how technologies can help legal professionals in their jobs.

“Our goal is to make legal help accessible to average people…[and] some lawyers saw us as a threat,” according to the company’s website. After challenges, some courts ruled that LegalZoom was a business intended to provide better legal service to the public, not to replace legal professionals. LegalZoom acquired the British law firm Beaumont Legal at the end of last year to extend its business into the United Kingdom.

Another service provided by LegalZoom is connecting lawyers with potential clients. It currently allows its customers to score the lawyers registered with the company just as users of Uber service score drivers. It now has some 3 million clients.

Some entrepreneurs in Korea are adopting a business model similar to LegalZoom’s.

Lee Young-joon, CEO of local start-up Lawoafactory, initially launched a lawyer research service. But privacy laws here prevented him from sharing information about lawyers, Lee said. “We got involved in a lawsuit because of that,” he explained. “It’s settled now but it showed me how closed the legal industry is in Korea.

Lee switched to another service called “moduSign.” That service allows users to create contracts online, eliminating the need to hire a lawyer, meet face-to-face and physically sign documents. They are also stored safely.

“At the moment, our service is used in a variety of fields, some even using it to create marriage contract,” explained Lee. “Most contracts require people to go somewhere, meet, spend hours going over details. Our goal was to eliminate such costs.”

Some 120,000 clients are relying on Lee’s service to make contracts. Major institutions using moduSign include leading tech firms such as Kakao as well as state-run energy company Korea Electric Power Corporation. The company’s sales are growing 50 percent per month and it expects to reach a break-even point by the end of this year, Lee said.

Authorities are also promoting innovation in the legal sector.

Earlier this year, the Ministry of Government Legislation launched a project to promote the creation of AIs well-versed in the law. The ministry will build a knowledge base that can be used for machine learning processes - vital to the development of AI.

Some people in the field such as Rhim of Intellicon present a glimpse into a future in which machines advance enough to resolve simple legal problems on their own.

iLIS-7, an AI-based legal reasoning engine developed by Rhim and his colleagues at Intellicon, won the Competition on Legal Information Extraction / Entailment (Coliee) 2017, an event that took place in London in June. At Coliee, teams from around the world solve complex legal problems using AI algorithms. It was the second consecutive year that Intellicon claimed the top prize at the event.

Rhim explained that contestants are asked to solve legal problems on Japanese civil law, which are also questions from the Japanese bar exam, when the Korea JoongAng Daily sat down with him earlier this month at his office in Gangnam District, southern Seoul. The competition tests the AI program’s ability to find relevant civil law articles to solve a problem and explain their relevance.

Rhim, who studied bio science, mathematics and physics at Seoul National University, said he first perceived the inevitability of the merging of different industries by studying interdisciplinary fields such as mathematical cognitive psychology and brain science in the United States.

“Fields such as law have been considered a domain designated for humans alone for hundreds of years,” said Rhim. “It was a wake-up call when IBM’s Watson defeated a human in 2011 at the game of Jeopardy [a television quiz show in the United States.] It was apparent proof that deep learning, which Canadian scientist Geoffrey Hinton proposed in 2006, achieved significant development in just five years.

“In 2012, Blackstone Discovery used its software to automate the process of discovery [a pre-trial procedure in the United States to obtain evidence] during the patent lawsuit between Apple and Samsung,” Rhim added. Such events compelled him to return to Korea and pass the bar exam to ultimately start a legal tech company dedicated to connecting law and AI technology.

The ultimate question is whether AI agents can fully replace humans in the legal field.

The case of Loomis sparked speculation that legal professionals such as judges and attorneys may be counting the days until they are forced to find new jobs.

In 2013, a group of researchers from Oxford University predicted that there was a 40 percent probability that the occupation of judge will become obsolete by 2030 - replaced by AI.

However, some experts such as Roman Yampolskiy, a Latvian-born professor of computer science and AI expert at the University of Louisville, warn about such predictions, saying AI algorithms created by private companies may be prone to making biased judgments. Rhim of Intellicon Meta Lab holds a similar view, although for different reasons.

“There is a concept called ‘Moravec’s Paradox’ - hard problems are easy and easy problems are hard,” said Rhim. “This means that while computers may be more capable when it comes to computational problem solving, they are less than useless when it comes to activities requiring perception and mobility, which comes easy to humans as it’s embedded in their DNA structure.

“When it comes to legal work, no machine will ever be able to mimic human completely as they require not just knowledge but intuition and other traits only unique to humans,” Rhim added. “Furthermore, human lawyers and judges are put in their positions through the process of a social consensus, not because they are more intelligent or superior than others, and machines will merely help them to minimize cognitive bias and work as supplementary agent to assist in research through a massive amount of information.”