Adoptee deepens ties to Korea at the Olympic Games

Adoptee deepens ties to Korea at the Olympic Games 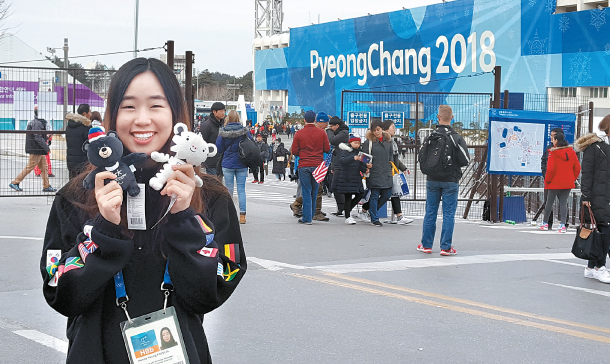 Hanna Poeschl, 22, is a Korean adoptee. She was born Hwang Young-hye in Daegu and adopted by the Poeschl family at the age of 13 months. She grew up in Minnesota with a younger sister adopted from China.

Unlike some other adopted kids, she was curious about Korea and her natural identity.

“If I was not adopted, I would have been raised in Korea and speak Korean,” said Poeschl. “I was always curious about life in Korea.”

It was only after the family moved to Virginia that Poeschl found Korean friends and they told her the correct pronunciation.

In high school, Poeschl started studying Korean and won a scholarship from the Foundation for Korean Language & Culture. She visited Korea for the first time.

She decided to attend university in Korea and was accepted by George Mason University Korea Campus in Songdo, Incheon, as a global affairs major. Freshman year began in 2015.

Last month, Poeschl worked as an intern for the Olympic Broadcasting Service (OBS) during the 2018 PyeongChang Winter Olympics.
She assisted broadcasts from the Gangneung Kwandong Hockey Centre in Gangwon.

Poeschl is very interested in photography and video filming and editing, which made her a natural for the job.

Poeschl actually knew about Marissa Brandt (an adoptee born Park Yoon-jung) on the Korea Unified Women’s Hockey team from her upbringing in Minnesota.

They lived in nearby towns and Brandt’s dad is a cousin of Poeschl’s godmother. “I felt proud watching athletes who were adopted playing in this Winter Olympic Games, including Marissa,” Poeschl said.

There were four adoptees in the games, including two Korean-Americans, Brandt and Jackie Kling (Lee Mee-hyun) of ski slopestyle.

“When you watch the Korea Unified Women’s Hockey team’s games, you cannot tell who was adopted or naturalized South Koreans,” said Poeschl. “It was truly inspiring. They became a family throughout those games.

“I watched President Moon Jae-in and Kim Yo-jong [first vice director of the Central Committee of the North Korean Workers’ Party] shaking hands with players right in front of me,” said Poeschl, who was right behind them with the cameraman during one of the matches of the joint women’s hockey team. “I was really touched even though I am Korean-American.”

Poeschl has not succeeded in meeting any of her blood relatives. From an early age, she knew she had a brother and she recently found out that he too was adopted by an American family.

Due to privacy laws though, she could only send a letter to him through an adoption organization. He didn’t reply, but she is not disappointed.

“I was happy finding out I had a brother. I had so many questions for him, like whether he had good adoptive parents like I did, how was growing up in the States, if he had interest in Korea, so it took quite a long time to write a letter,” said Poeschl.

“I think my brother might not be interested in Korea like many other adopted kids,” she said. “If I meet him, I want to explain him to the Korean language and culture. I believe I can meet my mother and brother one day.”

Poeschl plans to return to George Mason University in the United States to finish her studies after studying on the Korean campus for three years.

Poesch added, “I want to improve my Korean skills. As I understand both Korea and the United States’ cultures, my dream is becoming a bridge of communication between the countries.”