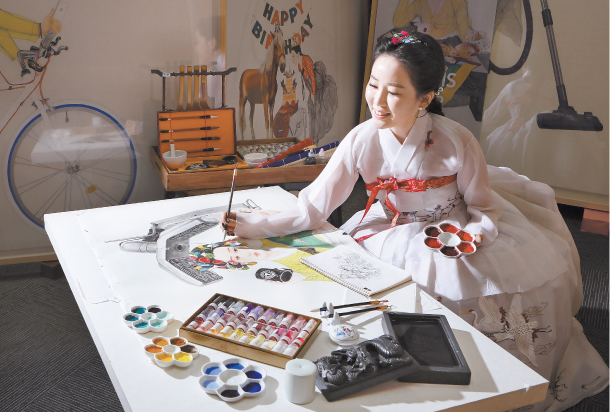 Artist Kim Hyun-jung paints a portrait while wearing a hanbok, or traditional dress, in her workroom located in Pungnap-dong in Songpa District, southern Seoul. [PARK SANG-MOON]

Artist Kim Hyun-jung has long been in the spotlight for her unique approach to art: she breaks conventions and depicts Korean women in traditional dress in the modern world. She paints her characters on hanji, or Korean handmade paper made of mulberry trees, and adds satire and humor to each piece. She has been deemed the “idol of Korean painting” for her understanding of the complex feelings of modern women and for popularizing Korean art on social media.

Kim started drawing at eight, when she began attending an art academy. Her parents, who knew she had artistic skills, gave her unconditional support to pursue her interests. Kim says she is who she is today thanks to her parents’ trust and support.

The reason she majored in Korean painting dates back to her second year at Sunhwa Arts High School. She was left speechless when she first gripped her brush and drew a stroke of diluted ink - the soft and comfortable feeling immediately attracted her to traditional ink wash painting. Her passion for painting grew with every stroke she made.

Kim was also inspired by the book “Special Lecture on Korean Paintings” written by Oh Ju-seok. The portrayal of Korean painting aesthetics, the wit and sincerity expressed in old paintings, and the delicate use of brush strokes made her fall in love with the art form.

In Kim’s collection of artworks entitled “Coy Story,” she depicts a series of Korean women wearing hanbok, or Korean traditional dress, who, contrary to what their attire suggests, behave in a free-spirited manner - one of them drives a motorbike, and another eats noodles while sitting on the floor.

In the portrait entitled “Coy: You Move Me,” left, a girl rides a delivery motorbike wearing a hanbok or traditional dress. A similar girl in “Oops,” right, eats ramyeon, or Korean noodles. [PARK SANG-MOON]

Kim goes through several steps before rendering a piece’s final version. First, she draws a nude sketch of the character. Then, she uses hanji to create a collage of the hanbok, which is then laid on top of the sketch. Kim dyes the hanji herself in order to make it translucent, intentionally revealing the silhouette of the characters. The translucent attire shows that what they are wearing on the outside does not define who they truly are within, while expressing the artist’s hope that women should not be judged by social biases.

All of the characters in her drawings are, in fact, self-portraits. Kim originally painted characters whose outer appearances were different from their inner selves in a humorous manner. But she eventually realized the portraits resembled herself, so she began drawing more honest portraits.

Kim’s Coy Story series, also dubbed “21st-century genre art,” was a huge hit and each work was quickly sold. Art critics referred to her works as “bold” and praised her for her fresh ideas and unique painting style. She is also considered a rising star of the era thanks to her modern reinterpretations of traditional painting. In 2017, she was included in Forbes’ 30 under 30 Asia, a list of the most influential people in Asia, for her mesmerizing “Korean-influenced artwork.”

Although Kim is a full-time painter, she also holds various lectures where she shares her stories as an artist. She lectures about how art and the humanities positively influence society. She also teams up with brands and companies for collaborative projects.

Kim majored in Oriental Painting and Business Management at Seoul National University. She was nervous about the idea that “artists are always hungry.” She wanted to study market structures in order to figure out why artists lived economically unstable lives. In order to solve the problem, she thought knowledge in business management would be useful for future exhibit planning, collaborations and other artistic projects.

Kim believes that communicating with the public is also very important. She actively uses Instagram, Naver blogs, YouTube and Twitter to communicate with around 100,000 followers. According to Kim, artists are the spokespeople of the public - without knowing how the public feels, artists would be unable to produce good work.

Kim hopes people remember her as “an artist who reinterprets Korean elements in a pleasant, modern way.”

Famous artists are usually characterized by their own unique style. Examples include great Western artists, such as Picasso and van Gogh, or traditional Korean artists, such as Kim Hong-do and Sin Yun-bok. Kim Hyun-jung wants to be known as an artist with her own distinct style.