Soccer world is a bonanza for woman with ambition

Soccer world is a bonanza for woman with ambition 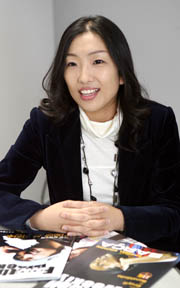 People used to say that one thing Korean women hate is to listen to guys talking about soccer or the military, but this no longer holds true. Even the publisher of Korea’s only soccer magazine, Football Weekly, is female. Huh Soo-young, 30, the head of Sports MIG, which publishes Football Weekly, is trying to carve out a niche in the magazine market with a product that even male publishers were afraid to try.
Ms. Huh is also working as the Korean publicist for the world’s most popular soccer team, FC Barcelona, the first European soccer team to sign a contract with a Korean marketing firm.
The latest news about FC Barcelona is featured in each issue of Football Weekly. Furthermore, Ms. Huh is in charge of launching FC Barcelona’s official Korean Web site. A sponsorship deal between FC Barcelona and a Korean firm is also being negotiated. The winners of an online soccer competition will be given access to FC Barcelona’s Asian Tour later this year. On her relationship with FC Barcelona, Ms. Huh says, “It is the result of a bold challenge and being prepared.”
After the first edition of Football Weekly in June 2006, Ms. Huh sent out e-mails to European soccer teams stating her aspiration to work as a publicist for the teams. After researching each team and reviewing their Web sites, she sent them her proposal. FC Barcelona replied right away.
Ms. Huh met with the team’s officials in Japan and Spain, and explained her proposal more in depth. The officials described her proposal as “concrete and fresh,” and signed a contract on the spot.
Ms. Huh received her bachelor’s degree in physical education and a master’s degree in sports marketing at Seoul National University. She fell in love with soccer while working for HBS, the broadcasting channel of the International Football Association (FIFA), during the 2002 Korea-Japan World Cup. In 2003, she joined Cheil Communications, an advertising firm, and successfully managed sponsorship for professional basketball in Korea and the torch relay for the 2004 Athens Olympic Games.
However, she wanted to be involved in “small but meaningful” activities that big companies don’t handle. She wished to promote and grow with a certain team.
She plans to turn Football Weekly into a well-rounded magazine by covering not only soccer but also other topics such as fashion, travel, cars and food. She also has the ambition to expand her promotional activities to Japan and China. Even well after midnight, she enjoys the process of putting together the magazine in her office in Mapo-dong, western Seoul.