Hitting the books and the showbiz circuit

Hitting the books and the showbiz circuit 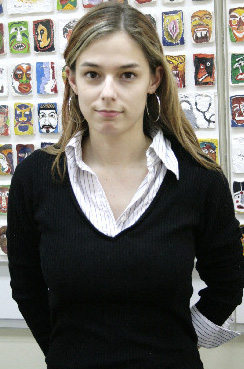 As a cast member on Korea’s popular television talk show “Misuda (Chatting Beauties),” Dominique Noel is a local celebrity around these parts.
Her top priority, however, is hitting the books, not the showbiz circuit. The 22-year-old Quebecois is a college student here. Originally an exchange student during both the fall 2005 and spring 2006 terms, she decided to transfer full-time to the Underwood International College at Yonsei University in the fall of 2006.
Korea has become her favorite foreign country, she said, since she first grew interested in the country after listening to the all-girl pop group SES.
“Since I was young, I have been interested in Korea,” Noel said. “Before I came here, I studied East Asian Studies. I believe that I am supposed to be here to learn more about Korea. That’s why I transferred to Yonsei University.”
Like others on campus, Noel has a lot of fun in college. She’s joined clubs and gone camping with fellow students. And like every other college student, she’s had her share of experiences with soju. As she’s groped her way through college life and grown comfortable with her Korean friends, she’s gotten quite good at speaking Korean.
“My Korean friends are all kind and nice, so when I meet them, I feel comfortable,” she said. “I think they are part of the family.”
Since starting her junior year at the beginning of this month, Noel had tried to put more emphasis on studying. She’s an international studies major, with six courses, including world politics and world history this semester. Despite being busy as both an entertainer and a student, she manages to find time to have fun in Korea.
“Even though sometimes I miss my hometown, my life is good enough in Korea,” she said. “After graduation, I would like to do something related to communication, movies, dramas, broadcasting or journalism. Being a radio show host or an event planner might be fun.”