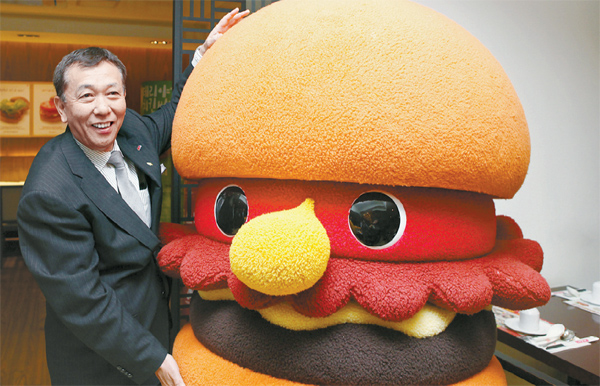 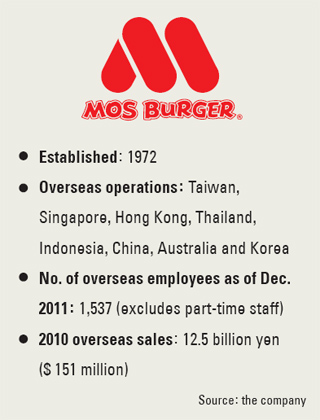 Now Mos Burger, the Japanese hamburger giant known for its use of fresh vegetables and unique local sauces, is targeting what it sees as an untapped niche market here.

“Some say we should have entered the Korean market sooner,” Mos Burger CEO Atsushi Sakurada said in an interview with the Korea JoongAng Daily on Thursday. “But there is space for us to grow here.”

Mos Burger entered the domestic market by opening its second store in Gangnam, southern Seoul, on Thursday. It said it aims to increase the number of stores to 50 in five years.

The company, which celebrates its 40th anniversary this year, was the first in the world to develop a teriyaki burger, as well as a rice burger using a bun made of rice. It ranks second in the Japanese market behind McDonald’s.

Mos Burger began its overseas operations in Taiwan in 1990; it now has a presence in eight countries.

Q. What do you say to your critics who contend Mos Burger should have entered the Korean market sooner?

A. The most important thing in marketing is not timing but rather positioning. Take Kraze burger. In Korea, it is twice as expensive as McDonald’s and Lotteria, whereas we are somewhere in the middle. That means there is space for us to grow in Korea. We are targeting customers in their 20s and 30s who have been looking for something new after feeling dissatisfied with the taste of fast food burgers and the high prices of handmade burgers. We don’t sacrifice either quality or price, so we can offer them the ultimate burger experience.

How do your burgers differ from those of your competitors?

Our sense of devotion to each of our products is different. It takes just one minute for fast food joints to deliver their burgers to customers because they mass-produce them, but it takes us five or six minutes to prepare them because we only start making them after we receive the order. This differentiates us from our competitors in terms of quality.

The second issue is taste. While pre-made burgers are dense and tough, our burgers are juicier because we make our buns and patties and other condiments moister to reflect the Japanese eating habit of consuming miso soup [Japanese traditional bean paste soup] with their meals. We wash the lettuce in cold water of about 4 degrees Celsius all year round, and make our patties by mixing them with pork and beef to improve their tenderness. We also add our special meat sauce, which is a blend of tomato, onion and beef, and this enhances the overall juiciness of the burger.

Our burgers suit the tastes of Korean customers because they also have their own soup-eating culture.

The third point is hospitality. Our employees deliver food to tables. And while fast food hamburger restaurants encourage their customers to quickly finish eating and leave, we don’t. I know that Korea has a developed cafe culture, and I want customers to stay and enjoy their meal in a relaxed atmosphere at our stores.

Why are your prices cheaper in Korea than in Japan? How is this possible in the face of the strong yen?

We set our prices for the Korean market based on last year’s market research. Some people may suggest that our burgers are cheaper here than in Japan in light of the current won-yen exchange rate, but the gap between the two currencies was not that big when we conducted our market research.

In the case of Taiwan, where we opened our first overseas store in 1990, the price of our burgers there is just 70 percent of the price they sell for in Japan. But Taiwanese customers still find that expensive. We set the prices of our burgers based on a country’s gross domestic product and gross national product.

To ensure our business is not overly swayed by the fluctuations of the yen, we use local produce as well as kitchen equipment and packaging materials. That allows us to maintain more reasonable prices in overseas markets.

We may release localized menus for Korean customers, but only after we have focused on selling Mos Burger’s basic menus here for three years first.

Did the Fukushima nuclear disaster affect your sales? Is it true that you source your vegetables from the stricken region?

One of our stores near the Fukushima region was shut down. We do use vegetables from Fukushima, but only ones that have passed radioactivity tests.

Some people mistakenly believe that everything in Fukushima has become tainted by radiation, but we are talking about a huge area, and only some parts of it have been affected by the disaster.