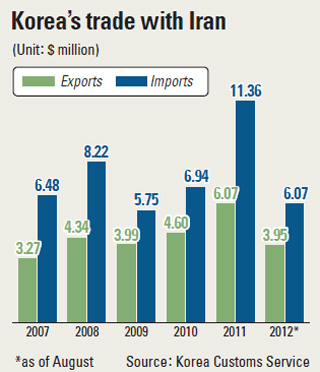 According to the Supreme Prosecutors’ Office Division of Foreign Criminal Affairs yesterday, the trading company, between February and July of 2011, made over 50 withdrawals for a total of 1.9 trillion won from an Industrial Bank of Korea branch in Seoul from money that was transferred from a bank account under the Central Bank of the Islamic Republic of Iran.

“We are closely analyzing all documents we have received from the Bank of Korea of the company’s transactions,” said the prosecutors.

Prosecutors said they suspect a 73-year-old Korean-American man known only by the initial “J,” who established the company in 2009. 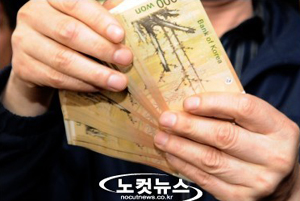 Prosecutors became suspicious of J when he recently attempted to transfer $20 million to his account in the United States without filing with financial authorities.

The company’s documentation indicates that it has engaged in exports to Iran for the past three years. Last year, the company reported to authorities that it imports marble from Dubai, United Arab Emirates, then exports the marble for the construction of temples in Iran.

The money from the fraudulent transactions was then transferred to other accounts in at least six other countries.

“All proper procedures were followed for the transaction,” the Industrial Bank of Korea responded yesterday.

Required documents were filed correctly, said IBK. It said it received a bill of landing and the central bank of Iran bank account holder sent notice to approve the transaction, hence it was difficult for them to spot the transfer as fraudulent.

The bank added that it “does not have the ability to check if the goods were indeed delivered” for all of the transactions it deals with.

Prosecutors are in the process of confirming whether any items were delivered by the trading company and if IBK properly checked the details before the transfer, and state they are “still in the beginning stages of investigation.”

In order to check the breakdown of the transfer and actual trade transactions of the company, prosecutors have issued an order to raid the company’s offices.

The Bank of Korea, the central bank which monitors the country’s foreign exchange transactions, provided relevant transaction data to the prosecutors.

A departure prohibition order for U.S. citizen J was issued in case he tries to return to the United States.

The company is suspected to be a “paper company,” or a shell corporation without assets. It changed names in February 2011 and is registered to be a corporate body that deals with real estate consulting, takeovers and trade.

The company’s headquarters, located in Jamsil-dong, southern Seoul, is but a one-room office.

The company also approached Woori Bank, but the bank denied its request, determining there was a high chance that the company may be engaging in fraudulent transactions.

A Woori Bank insider said that after it was approached by the company, its employee did a background check and found it to be a paper company.

Prosecutors said IBK initially was going to sign a 6 trillion won contract with J’s company, which later was signed at one-sixth the cost at 1 trillion won.

They will investigate whether the company was in violation of the Foreign Exchange Transaction Act or the real-name financial transaction system law.

Under the real-name financial transaction system established in 1993, bank customers must use their real names for financial transactions. The measure was introduced to crack down on tax evasion and corruption. Opening a bank account with a borrowed name is considered illegal.

A golf partner of J, 66-year-old Bae, told the JoongAng Ilbo yesterday that J “speaks of his Iran business unreservedly” and that he “transferred a large-scale amount of marble from Dubai to Iran.” But he said, “I got curious and visited the office and found an empty officetel with a woman in her 50s who claimed to be the director.”