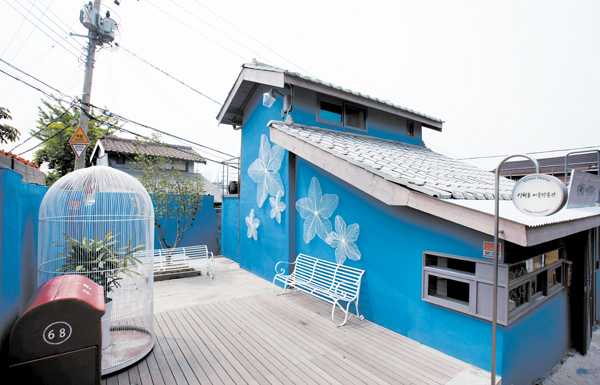 Ehwa Dong Village Museum is the main exhibition center for the Ehwa-dong Museum project. Choi Hong-gyu, a hardware craftsman who started the scheme, decorated the exterior walls of the building with steel-wire flowers. By Jeon Ho-sung

Life sometimes takes unexpected turns. Many decades ago when Choi Hong-gyu was 18, he gave up on going to college. Instead, he made a living by working as a delivery boy for a hardware store in Euljiro 2-ga, central Seoul, delivering steel wire and nails.

About 30 years later, Choi became the director of the Lock Museum, or the Soetdae Museum in Korean, in Dongsung-dong, central Seoul.

Choi became known as one of Korea’s best ironware designers, leading the trend for interior design goods in the posh Gangnam District in southern Seoul.

In 2006, Choi says his life took another unexpected turn. He became involved in an unusual project - transforming Ehwa-dong, a poor hillside village close to his museum, into an artistic neighborhood. 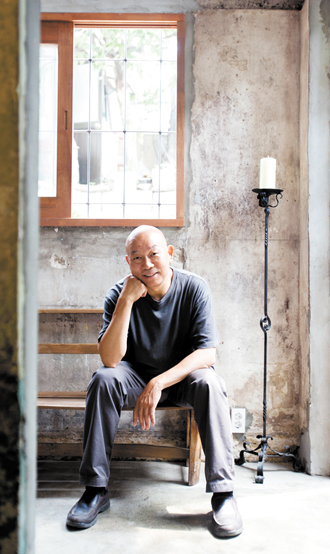 In this troubled time, when it was rumored that the neighborhood was to be knocked down and redeveloped, what Choi saw in this area was his childhood. The tortuous roads, steep stairs, stone works and small plant pots reminded him of growing up. For Choi, this area was a “priceless treasure house.”

Starting from about four years ago, when the redevelopment rumor faded away, Choi says he began to have a small hope in his heart. He wanted to turn the neighborhood into a living museum called the Ehwa-dong Village Museum Project.

The project is now in its second year. It establishes small museums and galleries in the district, allowing visitors to explore and listen to stories about the life of its residents.

On a recent Saturday, the tour began in front of Choi’s Lock Museum. Visitors can purchase 12 tickets that allow them to look around 12 small museums in this neighborhood for 2,000 won, excluding the Lock Museum.

Choi personally operates five of the museums in this neighborhood, in addition to the Lock Museum, including Sujak, a sewing museum, Choiga Hardware Gallery, also known as the Blacksmith’s Museum, Ehwa Dong Village Museum, which exhibits parts of residents’ lives, and Gaeppul, a wine opener museum that also displays keys.

“I thought it would be better to cooperate with like-minded people rather than work alone,” said Choi. “I talked about it to others around me and people like renowned architect Seung Hyo-sang said he would like to participate right away.”

The Patchwork Worskhop, operated by Seung, exhibits the work of his wife Choi Deok-ju, a patchwork craftswoman.

Artist Kim Mi-yeon also reopened her Chilbo Workshop, which was previously located in Garosu-gil, Sinsa-dong, southern Seoul, in this neighborhood and named it the Enamelling Art Gallery.

In front of colorful murals, visitors from around the world were busy taking pictures on the same afternoon. But Choi says he doesn’t want this neighborhood to be known for its wall art.

“This neighborhood has more than just murals,” said Choi.

“Here, people can time travel. Each elderly resident living here are the cultural heritage. We are trying to establish more ‘things to do’ in this neighborhood like having a cup of tea with the residents.”

In Sujak, the sewing museum, many visitors were exclaiming at colorful miniatures of sewing machines, smoothing irons and skeins. The exhibition allows visitors to see a sample of the small sewing factories that used to be located here. A guest house for visitors is on the second floor of this museum.

The Choiga Hardware Gallery, or the Blacksmith’s Museum, boasts a wide collection of irons. In this rough-looking gallery, there’s a front page of a daily newspaper that dates back to Aug. 16, 1979. 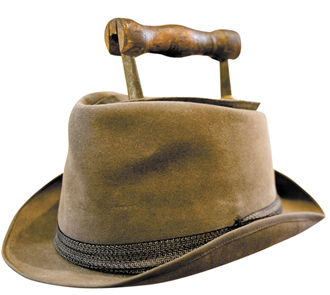 The Ehwa Dong Village Museum, according to Choi, is the main exhibition center of this project. The sign at the main entrance is written by the famous sori (narrative singing) performer Jang Sa-ik. The museum exhibits diverse daily appliances and tools donated by the residents of Ehwa-dong.

It includes a 45-year-old nickel-silver pot, a rice paddle that one of the residents received from her mother-in-law, and many more items that young children of today may not recognize.

In Mokinheon, which also operates as a cafe, University of Seoul architecture professor Lee Chung-kee’s photographs, which compare the past and present of the neighborhood, are exhibited. The JoongAng Sunday recently sat down with Choi at the cafe. Here are excerpts from the interview.

Q. What made you start the village museum project?

A. I think areas that still maintain our old culture are very valuable. I wanted to give life to such an area. This place is like a treasure for me.

Weren’t residents in this neighborhood resistant to outsiders like yourself, who seem like to be interfering with their lives?

I’ve been living in this neighborhood for the past four years, like the residents. I’ve especially talked to the elderly in this area to hear about their needs and have tried to help them here and there.

For example, they said it’s really difficult for them to climb up and down the steep stairs, so I decided to install new guardrails after consulting with the district office. When inputting the rails, I tried to think about the harmony and balance between designs and colors. Of course, there are still many residents who think badly of us. Noise that visitors make and their thoughtless littering seem to anger the residents the most.

They may also think you are just investing in real estate because you’ve purchased four houses in this neighborhood.

From left: The exterior of the Lock Museum in Dongsung-dong in Daehagno, central Seoul. The exterior of the museum is decorated with a steel design created by its director, Choi Hong-gyu; the ceiling of the Lock Museum is adorned with abandoned hardware; colorful threads from Dongdaemun’s fabric market and irons in various shapes and sizes are displayed in Sujak, the sewing museum; the interior of Sujak.

The houses are all for museums and galleries. The concept of this project lasts 10 more years. I don’t think I could even sell the houses before that - even if I wanted to. I certainly have no notion of selling them.

I’m not a property speculator. If I do sell the houses, that will mean that I am no longer doing this project. I even delayed constructing a multicultural space in Yangpyeong for this project.

Have there been more artists or individuals wanting to participate in this project?

I’m in the middle of talking to one business owner who raises mountain goats. I think it’ll be a good idea to produce unique dairy products and exhibit and sell them. I think it’s important to give people the impression that there are fun things to do in Ehwa-dong.

Is there any kind of support from the local government?

The Seoul City Government helped us financially to produce this year’s brochures. I also often hold discussions with officials at Jongno District to find out what kind of support they could give.

Are there any difficulties?

Participants in this project must not make too much profit but they must make some profit. I think the answer is to earn just enough that doesn’t make residents begrudge their success.

These days, there are many neighborhood revitalization projects like ours throughout the country. But three preconditions must exist in order to succeed: a workaholic who can only think about this project, young people with passion, and an outsider with a vast network.

What kind of neighborhood do you want to transform this area into?

I want this neighborhood to house museums and galleries that are small yet effective and a village that’s simple but has its own style and class. The location is quite advantageous as well. Ehwa-dong is within the four gates [of Seoul’s old city wall]. If we form ties with neighboring areas like Changshin-dong, Chungshin-dong, the new Dongdaemun Design Plaza and Daehagno, I think it will be the gold belt for culture.

That’s the most important fact. It has to have some sort of gains in order to make the residents more active. That’s why we are thinking about a new project of establishing a halmoni, or grandmother, brand. It may include selling snacks or food made by the halmoni of this neighborhood.

What’s your next step?

We are planning to hold a festival to allow visitors to experience the kimjang (making and sharing kimchi) culture of this neighborhood. The Kimjang Festival will allow residents and visitors to make kimjang together.

We will also be broadcasting live on the Internet about where we go to purchase ingredients and how we will prepare for this festival to raise trust while branding the whole experience.