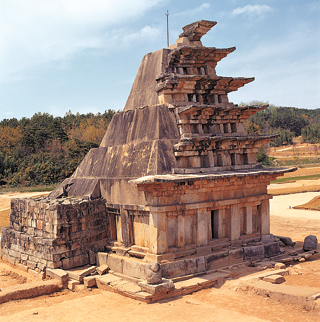 Korea’s “Baekje Historic Areas” are now a Unesco World Heritage Site, after the 39th session of the World Heritage Committee now underway in Bonn, Germany, made the decision to include it on Saturday. The session, which began on June 28, concludes on July 8.

The “Baekje Historic Areas” refer to a group of eight sites located in Iksan, North Jeolla and Gongju and Buyeo, South Chungcheong, which were important settings for the latter part of the history of Korea’s Baekje Kingdom (18 B.C. - 668 A.D.).

“The site demonstrates that interactive exchanges took place at the time of the ancient kingdoms in three countries within East Asia - Korea, China and Japan,” said Rha Sun-hwa, the head of the Cultural Heritage Administration, explaining the aspects of the area that contributed to the endorsement.

“It also encapsulates Baekje’s philosophy on life and religion as well as architectural technology and aesthetics,” she said, adding that the Korean government will work to improve management of these sites, strengthening the monitoring of murals inside the mausoleums in particular.
With this endorsement, Korea now has 12 Unesco-recognized world heritage sites, including both cultural and natural sites. Some of them are Changdeok Palace (added to the list in 1997), Gyeongju Historic Areas (2000), Haeinsa Temple Janggyeong Panjeon (1995), Jongmyo Shrine (1995), Royal Tombs of the Joseon Dynasty (2009) and Seokguram Grotto and Bulguksa Temple (1995).