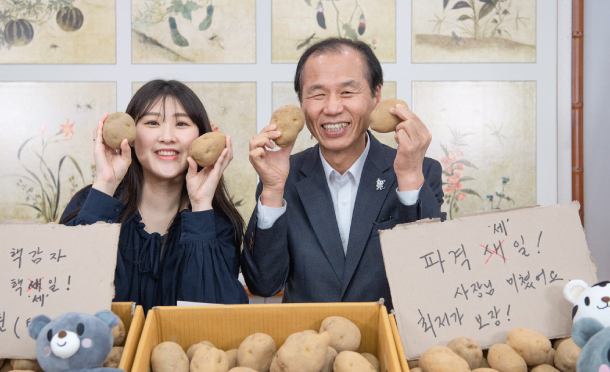 Since securing a box of face masks during the coronavirus outbreak has become an impossible feat these days, some people have settled instead for a box of potatoes.

“I have potatoes at home!” read a tweet posted on Tuesday. “What a relief.”

“I finally succeeded on the last day of pocketing,” another person wrote on Tuesday. “Now it’s time to collect all the recipes I can to learn what I can make with potatoes.”

Pocketing is a portmanteau of “potatoes” and “ticketing,” a word often used by Koreans to describe the competitive race to secure tickets online for K-pop concerts.

The race to buy potatoes from Gangwon began with an idea thought up at the Gangwon Provincial Office in early March.

Gangwon Gov. Choi Moon-soon hosted a meeting at the office early in the month and told his staff about how many potato farmers in Gangwon no longer had retail partners due to school cafeterias remaining closed and local restaurants faring poorly in the midst of the coronavirus outbreak. According to the provincial government, there were as many 11,000 tons of potatoes harvested in October and November of 2019 that needed to be sold by April, when the next batch of potatoes needed to be planted.

“We’re going to sell potatoes,” Choi said, recalled a member of his staff, Hwang Pu-reum, in an interview with the Kyunghyang Shinmun, a local media outlet, on Tuesday.

Choi changed his Twitter display name to “The governor who sells potatoes (Choi Moon-soon)” and tweeted on March 11 that the Gangwon Provincial Office would be selling 10 kilograms of potatoes for 5,000 won online, with no additional delivery cost.

“We prepared 1,400 boxes to sell on the first day of the potato project,” Hwang told the Kyunghyang Shinmun. “We didn’t expect the event to take off so well and so soon.”

All of the boxes sold out within an hour of the launch on the morning of March 11. As many as 100,000 people logged in to the designated shopping mall, Jinpoomshop, that morning, according to a tweet from Choi.

Since then, the Gangwon Provincial Government has put 1,400 boxes of potatoes on sale at 10 a.m. every morning.

As many as 1 million people logged in at once on March 12, overloading the server, according to Hwang. The site went down for several hours.

“We’re so sorry,” Hwang posted on Twitter that day. “But don’t worry we have enough potatoes. All of them are waiting to be sold into your homes.”

Hwang said that in order to meet the heightened demand from consumers, the provincial government eventually secured 8,000 to 10,000 boxes a day. They still sold out within minutes, she said.

“We worked from dawn to 10 p.m. or 11 p.m. everyday, dividing and packing the potatoes ourselves,” Hwang told the Kyunghyang Shinmun. “When the server shut down, we said to ourselves, this must be what it feels like to be a K-pop star.”

On Twitter, Choi called the Gangwon potatoes “PTS,” a pun on the superstar boy band BTS.

Those who successfully got their hands on a box of potatoes were keen to announce their success on social media. They also included recipes of potato-based dishes, ranging from common Korean potato pancakes to so-called potato mille-feuille.

The provincial government said Tuesday that they have sold 4,000 tons of potatoes in the past two weeks and that the remaining ones will be sold to schools and wholesale stores. Schools are planned to be open again from April 6.

“Thank you to everyone who bought the potatoes today,” Gangwon Gov. Choi wrote on his Twitter account last Tuesday.

“We sold the last 50,000 boxes of potatoes in just 7 minutes 4 seconds. We are thankful to everyone who took part to save the potatoes and the farmers.”

This was not the first time that Choi successfully marketed a Gangwon item online. In 2013, he garnered enough support for people to buy sailfin sandfish caught in Gangwon, after there was a surplus that year.