The neighborhood is run down, the church is cramped and it occupies only the basement of a decrepit building. Despite these signs of decay, the 60 Chinese-Korean women gathered in the vestry of the Seoul Chinese Church in Garibong-dong are full of hope and energy. 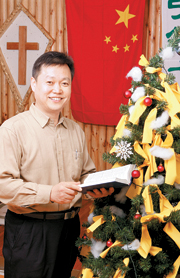 All of them have pledged to persuade Chinese women who live in Korea to participate in the democratic process, especially those who have not previously attempted to vote. Including ethnic Koreans, there are at least 5,000 Chinese living in the neighborhood, one quarter of the total population of Garibong-dong.
Although the number of women at the church was small, for those in the room it was a big day. They may be a tiny minority but they have decided to make sure their voices are heard by Korean policy makers.
“These women came from a socialist nation, which has no democracy,” said Reverend Choi Hwang-gyu, 42. Mr. Choi’s Garibong-dong church, which has served as a consulting office for Chinese people living in Korea for many years, is the base of operations for the women’s voting movement.
“These women, until now, did not understand how democracy works and how they could use their right to vote to pursue change,” he said. “It is small fires like these that can become substantial democratic movements.”
The campaign to involve these women more fully in democracy was the brainchild of Rev. Choi, who has been working to promote the human rights of Chinese people living in Korea.
Sitting in the middle of his church, which has no chairs, fancy stained-glass windows or golden crosses, Rev. Choi said, “I was never a student who became involved in democratic or human rights demonstrations or protests.”
While his friends went out on the streets in the 1980s, throwing rocks and fire bombs at riot police during the democratic movement protests, he had his nose stuck in Bibles and other text books. He began helping underprivileged Chinese people by accident.
“Before 1999 I knew nothing about Chinese aliens in Korea or the human rights movement,” Rev. Choi said. Back then he was an average priest who ran a church in Gyeonggi province. He didn’t even speak Chinese until couple of years ago.
The priest’s life changed when he met a Chinese political refugee in 1999. “Pursuing a personal interest I visited a symposium on North Korean human rights that was held at Ewha Womans University,” Rev. Choi said. “There was a man there who had smuggled himself into Korea after escaping from China. The Chinese authorities said he had spoken against the government.”
The man says he received no help from the Korean authorities. He attended the seminar hoping one of the human rights activists present would take up his case for Korean citizenship. After failing to grab the attention of the prominent figures at the symposium, he turned to Rev. Choi, knowing he was a man of religion. “I couldn’t help it,” said Rev. Choi. “As a man of faith and a human being I could not turn down a cry for help. So I took him under my wing and he lived with our family for six months.”
The priest said that after helping this man he became more and more involved with the Chinese community. The church that he runs now was founded four years ago.
“It seems to be God’s will for me to take this path,” he said with a smile. Since then he has been helping as many Chinese families as he can. He often offers assistance to women who have been abused by their husbands.
“As you can tell by the looks of the neighborhood most of the Chinese women marrying Koreans are not wedded to wealthy men,” Mr. Choi said.


“The match maker who lures Chinese brides say that Korean men are wealthy, have their own home, own a car and only need someone to cook, clean and give birth to their children. But when they arrive they find that their husbands have nothing and most are alcoholics who end up beating their wives. And it’s very hard for them to leave their husbands”
In the past, foreign women could only get Korean nationality after being married to a Korean for at least two years. “But the legislation was flawed,” Mr. Choi said. “Many foreign women had to endure abuse by their husbands. They could not leave because they became illegal aliens if the marriage was less than two years old.”
Rev. Choi worked with human rights groups and Kim Kyung-cheon, a former Democratic party lawmaker. Together they changed the rules. Abused women can now leave their husbands and not face deportation.
Helping out the Chinese in Korea hasn’t been easy. Every night the priest, who has a well-toned body, goes to a nearby dojang (training room) to practice using Japanese swords. His purpose is self-defense.
“At night when I am alone some intruders have made threats,” he said. “They came as a group and it was really scary.” He says these Koreans sometimes write profanities on the walls of the church. “They yell at me for helping the Chinese. They ask, ‘Why help them when you can’t help your own people.’ Such hatred comes from job insecurity.”
This year he says will be focusing on the voting rights of Chinese-Korean women and other foreign wives.
Although the voting promotion campaign is starting slowly it’s expected to expand.
According to the National Statistical Office, 159,942 foreign women married Korean men between 1999 and 2005. Among these women 99,164, or 62 per cent, are Chinese. And nearly half already have Korean citizenship. Mr. Choi says he hopes that these growing numbers will help policymakers take notice of the human rights issues faced by underprivileged foreign women in Korea.
He says his campaign will promote voting rights using the two Chinese newspapers that have the largest circulation in Korea.
Both Chinese papers have a circulation of 20,000 each and are sold in major cities including Seoul, Suwon, Daejeon and Daegu. “We plan to expand the campaign to other foreign women married to Koreans, such as those from the Philippines and Vietnam,” the reverend said.
Mr. Choi says there are still policies that need to be reformed for the benefit of the women. “Although the women can obtain Korean nationality after divorcing their husbands, there are still plenty of problems. The process of getting nationality takes too long since there is insufficient staff at the government offices. Therefore even after they leave their husbands, they have to live off their foreigner registration until their citizenship is approved. This deprives them of government financial aid and makes it hard for them to get a job. The system should be amended to enhance the rights of these women.”