A joyful union of second chances

A joyful union of second chances

Homeless people waiting in line for a free lunch at Yongsan subway station. By Shin In-seop

Covered in ashes from head to toe, Jang Ju-young, 47, shows his white teeth with a grin. His job is simple. With four other workers, he throws piles of discarded clothes into a fiery furnace. At the end of the day he cleans the inside of the furnace. It is a hard work, but Mr. Jang is quite content. At least he feels like he has a future.
His grimy job represents a significant change in his life. He has been sober and living in a safe environment for just a short period. Previously, he lived on the streets. He had been in and out of mental institutions for over 10 years due to alcoholism.
In October 2005, Mr. Jang and four other workers took out a collateral-free loan from Joyful Union, an institution that extends very small loans, or microcredits, to impoverished people who have no collateral. They opened an office that provides manual labor to companies in Goyang city, Gyeonggi province. At present, their main job is to keep the furnace running throughout the work day and provide heat to an adjacent factory.
In one year, they paid back their loan and now have room to save some money. As he works, Mr Jang feels like a phoenix, rising from the ashes.
“I don’t think much about drinking these days. I feel calm. There is a future ahead of me,” Mr. Jang said.
The hardest thing about his job, he said, is cleaning inside the furnace. “It is full of soot and ash,” he said.


With a mission to fight poverty, Joyful Union began lending money in 2000. Because its customers were often indigent, it made loans without asking for collateral. Its customers were poor housewives, farmers, poor urban households and alcoholic homeless people. Homeless people, who are often alcoholics, now account for the highest portion of borrowers, at 26 percent.
“The alcoholic homeless are the most disadvantaged people in our society,” said So Jung-yeol, the head manager of Joyful Union.
Joyful Union is modeled after the Grameen Bank, a microcredit institution in Bangladesh that was founded by 2006 Nobel Peace Prize Laureate Muhammad Yunus and was formed by Corporation Leftovers Love Sharing Community, a non-governmental organization that helps the poor. Joyful Union lends money to groups of three or more.
“It is because a group can depend on one another emotionally and psychologically,” Ms. So said. “They experienced hardships before. No matter how strong their will is, they could break down again on their own. And they share liabilities.”
Each group of borrowers is called a gongdongche or “community.” The five alcoholic homeless people including Mr. Jang are one of 81 communities created by the collateral-free loan system.
Mr Jang’s community, who were all alcoholics in the past, borrowed 15 million won ($15,790) from the Joyful Union. They were formed into a group by a volunteer supervisor, Presbyterian minister Kim In-hong, 54, who manages a church in Yangpyeong.
When he was young Mr. Jang was a casual drinker. But 20 years ago, when his father went bankrupt and he broke up with his girlfriend, he began binge drinking. When he was sober he worked on construction sites. When he lost self-control, he ended up in mental institutions. He said he had entered mental institutions on 20 occasions within a 10-year period.
“I used to drink until I was unconscious,” he said.
In 2005 Mr. Jang was referred to a community organized by the church in Yangpyeong county, and, with their help, he went into rehabilitation before getting involved in his current work.
One of Mr. Jang’s coworkers, Park Geum-shik, 48, entered rehabilitation at the church three years ago. A gaunt-looking man, he was a barber for 17 years until he lost everything through alcoholism. He was married with two daughters, but his wife left him and remarried. His two daughters now live in Yesan county, South Chungcheong province.
He was sent to the church by his mother after he began living at her house in Incheon. Before his rehabilitation he stole from his mother. While he was drunk, he scratched up the floor mat in his mother’s bedroom with a razor, looking for money. 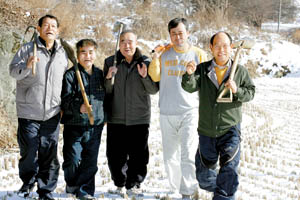 Clients in the Yangpyeong rehabilitation program after work, returning to the church where they are staying and going through treatment for alcoholism.


Asked why his family left him, he spat out, “Because I was drunk and went crazy.” He did not look up when he was talking. Although he now looks timid and harmless, after drinking he could rapidly turn from placid to monstrous.
“A lot of alcoholic homeless people have had their families break up due to an increased level of violence after drinking,” Mr. Kim said. “It is unendurable for the family.”
After Mr. Park entered rehabilitation at the church, he found the will to avoid alcohol. He said he does not feel like drinking anymore.
Asked about how he likes the work, he said, “It’s Good.” He said he is hoping to see his two daughters again.
That these men have found new lives is largely attributable to Mr. Kim. He not only helped them overcome alcoholism but also arranged their loan from Joyful Union.
Mr. Kim is one of 18 “durae” who work for the Joyful Union. The name comes from the Joseon dynasty and refers to a form of cooperative farming. The durae workers supervise 54 communities. Their work is entirely voluntary and they receive no wages. Most of the durae have a day job.
“For the last 20 years, Corporation Leftovers Love Sharing Community has had volunteers assist the poor,” Ms. So said. “Doing so, we have formed networks of volunteers, who became durae workers.”
Mr. Kim supervises Mr. Jang’s community of five workers in Goyang city, and a farming community formed by three of the 50 alcoholic homeless people who are staying in his church. Even though he has been struggling to make ends meet for his church, he often assists the farming community with paying back their loans.
When the principle was due and there was not enough money saved by the farming community, he and the community members worked on nearby construction sites and raised the money to repay the principle.
“They don’t go out and work on construction sites by themselves. I have to go and work with them,” he said. “They have been paying back the principle every week. It is important that they keep their promise so that they can build trust with Joyful Union and with themselves. It is a part of their training.”
Asked how he handles so much responsibility, Mr. Kim said, “Because I see myself in them. Otherwise, it would have been impossible.”


He has been a minister for 15 years. He came across a Bible while he was in prison for committing a white collar crime. More than 20 years ago, he used to be a prosperous real estate developer living in Daejeon. Then he went bankrupt and decided to run away from the police. He lived the life of a fugitive for one year before he was caught and sent to prison for four years.
“I had no knowledge of Christianity. One day someone gave me a Bible and I read it and was touched,” he said.
“When I was on trial, those called as witnesses gave testimony against me. The judge told me that if I call a witness, I should pick the right person,” Mr Kim said. “While the business was doing well, there were many people who wanted to be around me, but after the bankruptcy, there was no one.”
“I feel that the alcoholics are more sincere,” he said.
So far the communities have been successful. Both the farming community and the community in Goyang City have paid off most of their debt. Several members of both communities returned to their homes and reunited with their families. Now these former alcoholics have a goal.
“My goal is to return to society. I have a boiler manager’s license and someday hope to own a store,” Mr. Jang said.


by By Limb Jae-un Staff Writer