On the big screen, being thin still rules

On the big screen, being thin still rules 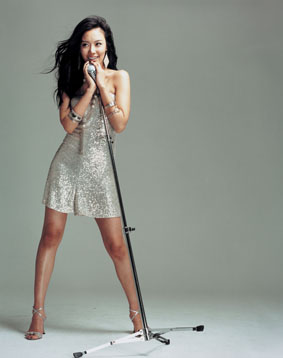 He is noted for his heartwarming comedies. One second you’re laughing your head off, and the next you’re grabbing a tissue. But that’s not all.
Director Kim Yong-hwa has tried to challenge the bias against various “physical disorders” in Korean society, whether it was a young man with a physical disability in “Oh Brothers” or a young obese woman in “200-Pounds Beauty,” his latest film.


But Kim’s works aren’t all about social justice.
After all, he makes “modest commercial movies” intended for the general public, as a local critic once put it. Publicity for the director’s new film so far has been overwhelming.
It has drawn over 5 million people, breaking box office records for the romantic comedy genre. Critics are expecting it to pass the 6-million mark achieved by “My Boss and My Hero 2,” the biggest hit in the history of Korean comedies.
His latest film may lack the intricate plot twists of the original story, which is based on a Japanese comic book, but it has earned critics’ praise for being “a well-made commercial film.” Perhaps Kim is making a name for himself in humanistic comedies.

Q. What’s it like to reach 5 million viewers with a film you’ve directed?
A. I had a feeling that this would be a somewhat bigger hit than “Oh Brothers” (over 3.2 million) since the mood among the film crew more vibrant while we were shooting. I expected about 3 to 3.5 million people, but not this. My only thoughts after the figure went over 3 million were to do a good job on my next film. 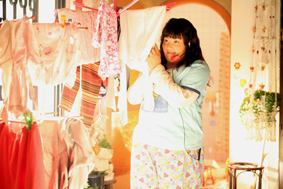 What do you see as the reason for the film’s success?
My standard for making a good movie is to ask myself whether the story interests me and whether I can be confident that it will also entertain audiences. If these two factors aren’t there, it is easy to fail as a commercial movie director. But most of all, I found shooting “200-Pounds Beauty” to be entertaining.
It also touched on plastic surgery, which a lot of women are interested in. That’s why I thought the film had a chance.

The film is one of the few adaptations that has been successful in Korea. What were your main concerns?
I practically wrote the script from scratch and the heroine went through full-body surgery. The original comic book was funny, but I just wanted to borrow the spirit of the story. I decided it could damage the film if we brought in every episode, story and character from the book to the movie.
I integrated real interviews from plastic surgeons and their clients into the film. The overall impression I got from the original story was one of “pain.” It was a story about the cruel reality where looks decide social status. I twisted the sad reality of the original into a comedy.

Doesn’t the film’s ending, where even Hannah (Kim A-jung)’s friend chooses to go through plastic surgery, reinforce the idea that you have be beautiful to be happy?


I am not too fond of didactic movies that tell my views on plastic surgery or anything else, and make that a major part of the plot. The ending is meant to provoke viewers to reflect on themselves, and realize no one is completely free from his/her appearance while knowing that looks aren’t everything. I presume the viewers got the point.

Kim A-jung made this movie into a big hit in the end, but you must have been concerned at first. I heard you originally had her playing A-mi, the lip-sync singer.
Casting Kim was difficult since she is better known for her glamorous image than for being a serious actress. I decided the film’s success depended on the character of Hannah Kang. For about two months I wrote Kim detailed notes for each scene, outlining what the role requires. We did countless rehearsals. I even acted out some of the scenes myself so that Kim could shake off her shyness. Every scene ended up being a process. The director threw out plan A, the actress brought in plan B, and we ended up shooting plan C, a combination of the two. Kim is a sensitive actress. She cried at a party before we went into shooting. It really comes down to a matter of the actor’s attitude. As I saw Kim grow into the part, I became certain this was going to work.

Songs, such as “Maria” sung by Kim A-jung, contributed to the popularity of this movie.


I actually worked with the musical director of this movie, Lee Jae-hak [a member of “Loveholic,” a famous Korean alternative rock band], in my college days when we played music together. We’ve been friends for 16 years now. My background in music helped me to integrate musical elements into a cinematic vision.
I had already picked out eight original soundtracks before Lee came on board. As I wrote the scenes, I was already thinking about the music that could go with them. There were plenty of complaints that “Maria” was too old-fashioned, but I was stubborn, saying I had picked it for Hannah to sing on stage. Lee agreed with me all the way.

What is your philosophy for directing comedies?
Comedy starts off with pain. But is it really best to portray that pain in a painful way? If one has really experienced pain, and really gone to the depth of it, I doubt one will really put a raw edge on it. I am drawn to a movie that contains both joy and sadness, and at the same time remains simple and light. My answer to comedy is to include both “a teardrop and a smile.”

What are you planning for your next movie?
If I find a story that I am confident in, I make it into a film. I went to college, majoring in film studies for 10 years due to financial problems, but my graduation piece, “Salted Mackerel,” received awards at international film festivals (both in Rochester and Houston). I made my directorial debut without ever working as a crew member on a movie set. I am one lucky guy. I want my third film to be more mature, one that has a wider emotional range and gives the public more satisfaction.