‘90s romance finds its way back to the screen

‘90s romance finds its way back to the screen 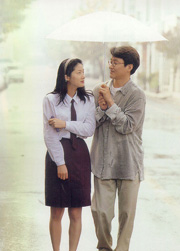 Shim Eun-ha, left, and Han Suk-kyu in a scene from “Christmas in August,” a 1998 Korean film that has been remade in Japan. Provided by Uno Film

The late 1990s were the heydays for actress Shim Eun-ha, now married and gone from the screen, but her fans still appreciate the fact that she appeared in one of the best Korean melodramas of all time. 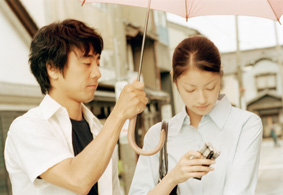 Yamazaki Masayoshi, left, and Seki Megumi in the Japanese remake of “Christmas in August.” Provided by Cinebank


Shim and actor Han Suk-kyu played a shy pair in the subtle romance “Christmas in August,” attracting more than 440,000 viewers in Seoul alone in 1998. The following year, the movie was released in Japan, where it was just as popular.
In 2006, director Nagasaki Shunichi decided to do a Japanese remake of “Christmas in August.”
This is exciting news for Shim’s fans. The film opens Friday in Korea, but there was a preview for the press last week. Fans and critics nostalgic for the late 20th century (or for Shim) crowded the screening room eagerly waiting for the drama to begin.
Playing Shim’s character, Da-rim, renamed Yukiko in the Japanese version, is Japanese actress Seki Megumi, who won the New Talent Award in 2005 at the Mainichi Film Concours. The actress is not widely known in Korea as this film is her debut in a starring role, but she is still young and pretty.
She may be too young and pretty to play the quiet Da-rim for an audience who remembers Shim playing the lovable character. (Shim was 26 when she played Da-rim and Megumi was 20 at the time of filming.) As expected, audience members pointed out that the female character was “very different” from what they had expected.
“She is just too tall,” a person hissed from behind me. (Shim is 5 ft. 4 and Megumi is 5 ft. 7.)
The remake closely follows the Korean storyline, but the preview was fun for viewers busy comparing it to the original.
Yamazaki Masayoshi plays Hisatoshi, the role played by Han in the original. In the Korean version, the character’s name was Jeong-won. Hisatoshi is a photographer working in his father’s studio who knows he doesn’t have much time to live.
The only joy in his life is capturing his clients on film at their best moments. That’s how he meets Yukiko, a part-time teacher at a nearby elementary school.
She comes to his photo studio often asking for printouts of pictures she has taken of her class. (In the Korean version, Shim was a meter maid who visited the studio to print out photos of violators’ cars.)


They soon become close friends but they never get to tell each other about the special feelings they have. (In the original version, Shim is the only one who is ‘suffering’ from unrequited love.) Hisatoshi tells Yukiko that he is married or that he has kids, but she knows he is lying.
One day, Hisatoshi is hospitalized, and Yukiko finds the studio has closed down. She waits months for Hisatoshi to return, never knowing why he decided to leave or when he will return.
The remake connects better with audiences as characters do a better job of expressing their emotions. At the same time, it lacks the subtle suggestions of the original.