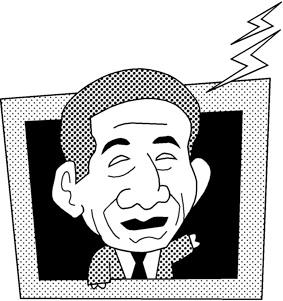 What is the Chinese origin of today’s stereotype that a thin waist is pretty? Plumpness had been the prevailing standard of Chinese beauty until the Tang dynasty. The concept of slender beauty seems to have appeared around the time of the Song dynasty. The origin of slender beauty dates back further, however. King Yi of Zhou in the Warring States Period had a peculiar conception of beauty: he preferred a thin person to a sturdy one. It is known that he doted particularly on a thin waist.
The problem was that his personal taste swept the nation as a big fad. The fact that the king indulged in thin waists was disseminated, and everyone went on a fast, or in contemporary terms, a diet, from the king’s guards to high officials. The diet fad spread to all women, not just the maids in the palace.
The “Warring States Period Book” reports that due to hunger there was not a single person who did not feel dizzy. Some even had difficulty standing up. It also records that in order to stand up, people had to lean on walls, and they could not get off a cart unless it had handles.
The term “waist of Zhou,” which refers to the thin waist of a pretty woman, originated from this episode. After the Tang and then Song dynasties, leanness of waist was established as the aesthetic standard of a Chinese beauty, and that tradition has lasted until today. Although it was understood as meaning the waist of a beauty, the term originally referred to the lesson that the taste of the highest commander in chief ruined the nation because it transferred to many other people without critical thought.
There is another anecdote that because King Gou Jian of Yue admired the virtue of courage too much, people of Yue disregarded death. Meanwhile, Duke Wen of Jin doted on leather clothes and leather became a nationwide fashion.
All of these stories teach us that the personal tastes of the highest authorities might ruin the state, and that we should not blindly follow fads that can risk our health or our money foolishly.
Today, the idea of laying blame or fault seems to be the irresistible taste of our president, and this tendency appeared again in the special announcement regarding blame for the economy.


Will this blaming trait become a fashion in Korean society? Or is it already too late to worry about it, when one looks back at the ideological and factious disputes that have come up again and again in the it’s-all-your-fault speeches of the president? In the future, I hope the president will not blame others. May this be the time for good will.