Roh not a standup guy

Roh not a standup guy 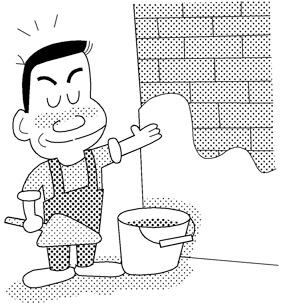 Imagine there is a crack in the wall ― after buying a trowel and cement, you mend the fissure; however, it crumbles off after several days. What thoughts would come to mind? Most likely, you would blame it on the cheap cement, complaining that the hardware store had sold defective cement made of sand.

If the newly applied cement dried perfectly without leaving a trace, you would probably boast about it to your wife (From “150 Psychological Experiments that Discover One Inch of My Mind”).
Psychologists refer to this mechanism as “self-serving bias.” When students perform well on an exam, the teacher boasts about “being a good teacher.” When the grades are poor, teachers blame it on the “poor home environment” of the students. Success is attributed to internal factors like ability, effort and temperament, and failure is attributed to external factors like misfortune, premeditated obstruction and fate because people avoid interpreting events of the world that damage their pride.
Politicians brazenly wallow in self-satisfaction. On Jan. 1, 1997 -- during the era when the “sullen father” served as the omen for the financial crisis of 1997 -- President Kim Young-sam in his nationally televised New Year’s address boasted about the achievements of his administration. “The economy was in poor shape when I took office,” he said. “But the economy has improved greatly during the past two years.” He said the people felt that times were difficult because “the economies of the United States and Japan were slumping.” When reporters asked follow-up questions, he repeated, “That’s enough.” He was lambasted for his arrogance. After that press conference his approval rating plummeted, and he served out his term as a lame-duck president.
President Kim Dae-jung, who had witnessed this, prostrated himself before the people during his New Year’s press conference, saying, “I apologize to the people.” He promised to “focus on revitalizing the economy and avoid participating in politics and the upcoming elections.”
President Roh Moo-hyun resembles former president Kim Young-sam. In his New Year’s speech delivered on Tuesday, President Roh boasted about the achievements of his administration and shifted blame during the entire speech. “I am responsible for not solving the public welfare problems but I am not responsible for creating the problem,” he said. President Roh blamed everything on what he inherited. He attributed positive results to his administration and blamed others for things that went awry.