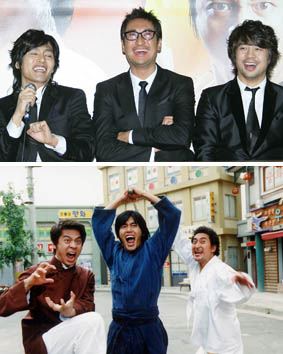 Choi Sung-kook, Shin Hyun-june and Kwon Oh-joong talking after a screening of “Three Kims” last week at Sinchon Megabox theater. At right, a still from the movie.[NEWSIS, Taewon Entertainment]

What a blessing it is for comedians to be able to make people laugh just by standing there.
Shin Hyun-june, Choi Sung-kook and Kwon Oh-joong are the kind of entertainers other comedians would kill to become. They do not look unusually funny, nor do they crack people up with ridiculous remarks. In fact, they are quite tall, handsome and lean toward solemn expressions.
But the three actors had people laughing as they stood in front of flashing cameras last Wednesday prior to a press screening of a new comedy film, “Three Kims.” The movie is the cute story of what three masters of different martial arts, all named Kim, go through in the provincial town where they live.
“Mr. Kwon’s son is going to be in his second year in elementary school soon,” Shin said with a shrug, bringing another burst of laughter. “This movie has to work if he wants to feed his growing boy.”
Shin’s most popular film had been the sci-fi-fantasy work, “Legend of Gingko,” where he appeared as the charismatic yet possessive General Hwang. But he moved toward comedy a few years ago and that suited him. Sadly, even in semi-serious films, like a recent story about a mentally challenged man, people think he is funny.
Kwon, a Korean Brendan Fraser-type, soared up the popularity chart after appearing in the sitcom “Sunpung Obstetrics.”
Choi, once known for appearing in coffee commercials and for being compared to Japanese heartthrob Takeshi Kaneshiro for his sharp looks, is now more familiar to audiences as a Korean Jim Carrey.
How did the director manage to cast the comical trio?
“After I decided to make this film, it took two days to think of Mr. Choi,” said Park Seong-gyun, director of “Three Kims.” “I thought no one could be better suited than him to play the eccentric character of kendo master Kim.”
Shin had promised Mr. Park 10 years ago that he would appear in whatever film the director debuted in. It was this promise that led to his being cast as Korean martial arts taekkyeon master Kim.
“As for Kwon,” Mr. Park continued with a laugh, “no offense, but I wanted to cast a prettier face than his. But after I cast the other two, Kwon was the only choice I had left that would blend them together in a trio.”
So Kwon became the kung fu master Kim.
“Three Kims” is about the small town rivalry between three martial arts masters, all with the surname Kim. They compete for students at their academies, compete for the attention of the town’s most eligible woman, and ultimately become friends.
Aside from a few unexpected kicks from Kwon, do not expect too much from them in the martial arts department.
“I joined the film about a month after I learned kung fu,” said Kwon. “Shin said it took him two months to understand Choi and be able to act with him without laughing, but I don’t think I can say I understood either of them.”
“They are just so funny to look at and I am not even in the same league as they are,” Kwon said shaking his head. “So I gave up trying to be funny and practiced my kung fu moves harder.”
Choi’s response to that?
“It’s about time Korea gave birth to a Jet Li,” he said with a solemn face. “I genuinely felt that when I was watching Kwon practice.”