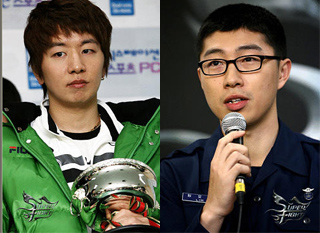 Ma Jae-yoon, left, of CJ Entus won the award for most valuable player and Lim Yo-hwan participated as part of the Air Force team at the fourth Super Fight games last Saturday. Provided by CJ Media

The fourth Super Fight games took place last Saturday in Jamsil, Seoul, continuing a series of one-on-one play-offs between the professional e-sports gamers of StarCraft.
Weather forecasts of snow and ferocious chills kept the stadium from being packed, but the spectator seats were still filled in the lower bowl, with people busy rooting for their favorite players and beating on blue and white plastic thunder sticks to keep up the noise. Commentators yelled hysterically into their microphones as if they were announcing a national crisis.
There were several matches, with single win or lose games between the best players from each of the professional gaming teams.
After a tournament-style series of games, CJ Entus was selected as the winning team, with Ma Jae-yoon picked by reporters as the most valuable player. Ma played three games and won all three of them, playing with his favorite species, Zerg.
Cho Gyu-nam, CJ Entus’ coach, won the award for best coach. The team took home 20 million won ($21,265) in cash, and Ma received 3 million won for his MVP award.
In an interview with the press after the games, Mr. Cho said that other players made compromises to let Ma play. “Everyone on the team wanted to play in the finals, but not everyone could. In the end, someone had to compromise so that Ma could play all three. This was our first cup in three years and we hope this is a good sign for us this year,” he said. He added that the team will use the prize money to train players during the off-season.

A notable match was one between Lim Yo-hwan and Park Jeong-wook of STX SouL, with “Emperor” Lim emerging as the winner. Lim used to be a member of SK Telecom’s T1, but he was drafted into the Air Force, where he is still doing service. Lim participated this time with other members of the Air Force ― but another flying buddy, Cho Hyeong-geun, was unable to beat T1’s Koh In-gyu.
Many spectators were impressed with Lim’s performance, especially since he had been a star of the StarCraft scene before he left for the military. People had been worried that he might have lost his touch.
Reflecting increased interest in computer games, cable channel XTM and Internet TV outlet GomTV were there to broadcast the entire session live. 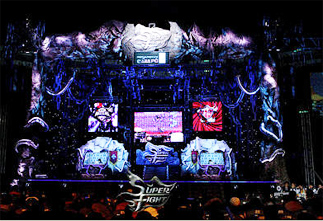