A Norwegian take on acid jazz

A Norwegian take on acid jazz 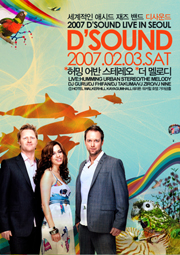 Jazz is undisputedly the all-time American classic. Yet for those seeking more than Louis Armstrong or George Gershwin, a European take on the sound might be a welcome change.
Tomorrow night the Norwegian acid jazz band D’Sound will be performing at the Sheraton Walkerhill Hotel. This is the band’s fourth visit to Korea. Sharing the stage will be the Korean bands Humming Urban Stereo, The Melody, Top Model DJ Guru and VJ Ziro.
D’Sound said through a press release that it will be offering more than a simple music concert to the audience. It is shooting for a major club party with visual effects.
D’Sound made its official debut with the album “Spice of Life” in 1996 and now has recorded a total of four albums. They last recorded “My Today,” which was released last year.
A group of three musicians, who go by the names Simone, Jonny and Kim, formed the band in 1993 in a basement in Oslo, Norway shortly after Simone and Jonny graduated from the Berklee College of Music in Boston. Kim was already a veteran singer at the time. The band was first called Sweet ’n’ Sour, and performed the music of Tom Waits and Prince at various clubs.
The band renamed itself “D’Sound” in 1994. Simone said the band members unanimously agreed that they should have a name that reflected their sound. They first tried The Sound, then Da Sound before settling on D’Sound.
D’Sound’s first single, “Real Name,” ranked No. 1 on Norway’s radio charts. “All I Wanna Do,” on the band’s debut album also hit the top of Japan’s international radio chart.
The first album, which mixed elements of acid jazz, soul and junk mix was nominated in two categories at the Spellemannpriser, which is Norway’s equivalent to the Grammies.
When the band released its second album, “Beauty is Blessing,” in 1998 two songs, “Ain’t Giving Up” and “Down on the Street,” ranked on Norway’s top ten list for radio play.
The album made platinum and in the following year, the band won “Best Norwegian Pop Group” at the Spellemannpriser. After releasing its fourth album, “Doublehearted,” in 2003, the band hit gold.
Among the Korean artists who will be working with D’Sound, VJ Ziro has done the visual effects for such high-profile Korean performers as Drunken Tighter, Joosuc and Clazziquai. The Melody, a band formed in 2003, has seen its works used in televised commercials and in movies.