Collaborations, a ticket to Hollywood

Collaborations, a ticket to Hollywood 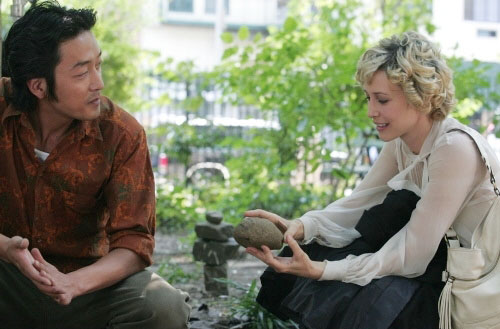 A scene from ‘Never Forever’

PARK CITY, Utah ― Which country does the film “Never Forever” belong to? It was produced by Now Film, a Korean film company, and Vox 3 Film, a U.S. company. Korean-American Gina Kim directed and Korean actor Ha Jung-woo starred. When the story about the conflicts and struggles between a Caucasian woman and her Korean-American husband was entered at the Sundance Film Festival, it was considered an American movie.

Korean-American director Grace Lee’s “American Zombie” is a film with a similar mix. Korean company iHQ invested in the project, and it was produced by Lee In-ah and Ms. Lee, both belonging to the American company LeeLee Films. “American Zombie” screened at the Slamdance film festival at around the same time that “Never Forever” made its debut at Sundance. The films raised the profile of collaborative efforts between Korean and American film companies. 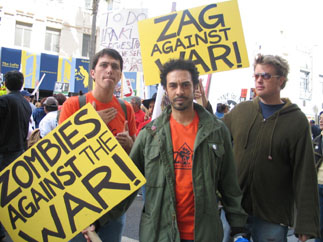 A scene from ‘American Zombie’

Korea steps into the American film community
Geoffrey Gilmore, the Sundance festival’s director, introduced “Never Forever” himself at the Racquet Club Theater in Park City, Utah on the evening of Jan. 21. Besides saying the film portrays a woman’s desires in a profoundly delicate manner, he said the movie is a great addition to the American independent film community.
Following Mr. Gilmore’s speech, actors Ha Jung-woo, Vera Farmiga and David McInnis stepped on stage to greet the crowd. The audience of over 600 responded with enthusiastic applause. It was a moment that signaled a new horizon for Korea-America film collaborations.
For a long time, the Korean movie industry has wanted to make advances into Hollywood. The bastion of the American film industry, however, has maintained its thick walls.
There have been some notable exceptions, including Korean actor Park Joong-hoon’s role in the 2002 Hollywood movie, “The Truth about Charlie,” as well as Korean director Kim Ki-duk’s film, “Spring Summer Fall Winter and Spring,” which drew around 330,000 to American theaters in 2004.
Last year, however, Korean movies only grossed around $1.96 million (around 1.8 billion won) in North America. Korean filmmakers have decided collaborating with American companies is the best way to crack the American market.
“Never Forever” and “American Zombie” are two such efforts.
The movies come from different genres, but have many similarities. Both have Korean-American directors, almost all of the actors and crew members from both films are American, and both debuted in the United States.

“American” themes ― discrimination and isolation
“Never Forever” and “American Zombie” have very American themes ― women’s issues, immigration and the treatment of minorities.
In “Never Forever,” the focus is on Sophie (played by Vera Farmiga), a woman married to a Korean-American lawyer, Andrew (played by David McInnis), and her desires. She wants to have children but unfortunately, Andrew is sterile. Sophie approaches Jihah (played by Ha Jung-woo), an illegal immigrant, and offers him a large sum of money to get her pregnant. Issues relating to family, marriage, economic disparity and relationships between Asians and Caucasians are central themes in the film.
“American Zombie” is a fake documentary using the hypothesis that zombies, which are a broad representation of society’s minorities, really exist. The film features interviews with “real” zombies, who aside from physical differences, are portrayed as having the same emotions and thoughts as humans. They are discriminated against and viewed as abnormal. This sharp satire about our own prejudices had a comic edge that appealed to viewers at Slamdance.
The two films are scheduled to open in small theaters in the United States first and gradually expand their distribution.
The production budget for “Never Forever” was $3 million. “American Zombie” cost $1 million. By American standards, those are very small figures. The production teams however, are expecting the films to do well.
“Never Forever” will open in Korea at the end of March. No Korean plans are in place yet for “American Zombie.”