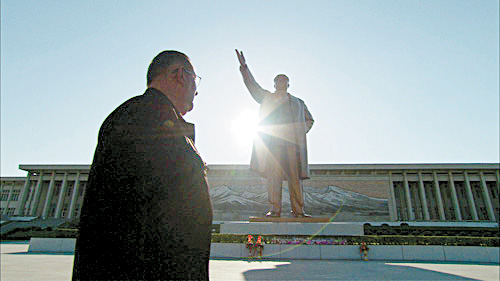 A scene from “Crossing the Line,” Daniel Gordon’s film about James Dresnok. Provided by the producers

UTAH ― A third documentary set in North Korea by Daniel Gordon, a British filmmaker, was recently screened at the Sundance Film Festival at Park City, Utah. It looked at the life of an American defector to North Korea, James Dresnok.
The director’s previous films attracted global press attention after they showed revealing images of daily life in North Korean that had not been seen before. Gordon’s films looked at young gymnasts preparing for the Mass Games (“A State of Mind”) and members of the 1996 North Korean football team that beat Italy 1-0 in the 1966 World Cup, advancing into a quarterfinal with Portugal (“The Game of their Lives”).
His latest documentary, “Crossing the Line,” about an army private examines the life of an American soldier, one of four who defected to North Korea, and how the North used the man for propaganda purposes. The JoongAng Ilbo had an interview with the director.

Q. Why were you drawn to the characters in your films?
A.This is my third film in North Korea. The first one was very close to my heart. They were a North Korean football team. That’s the reason I started to make films in North Korea, only because of the football team. When we arrived there, we heard stories about Americans living in North Korea, which I didn’t believe. We made inquiries and found it was true. Originally we wanted to make a film about four defectors to North Korea. But there was only one left. The film concentrates on this man. So there was a line of films, one, two, three; first the football, then the mass games and then Americans defectors. 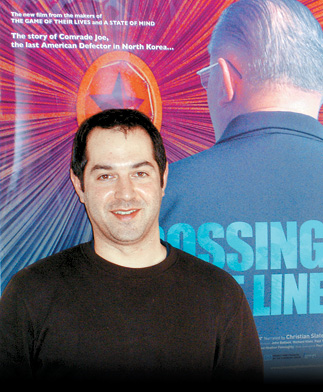 Daniel Gordon has now made three acclaimed documentaries about the people of North Korea. By Joo Jung-wan

How did you get to meet them?
We made a series of inquiries as to whether it was possible to meet them. It took over two years. Nick Bonner actually met him first in May 2004. We had just finished “A State of Mind.” It was very strange, surreal, to meet an American with a Kim Il Sung badge. He spoke with an American accent. He looked American, but he wore a North Korean suit. He looked Korean, but he was a Westerner. It was very strange.

What was your impression?
The first thing you see is how big he is. He is very tall, nearly 2 meters and 130 kilograms. He is a big man, a sumo man. He was actually a very open individual, and he really wanted to tell his story. So we thought maybe that was favorable, because we hadn’t made an agreement yet, but he really wanted to talk and he trusted us.

My impression was that the guy was very happy. He found happiness in North Korea.
I think that’s probably accurate. But I think most Westerners find it impossible to imagine how things could be so bad for an American that North Korea could look better. But even in North Korea, there was a big period of adjustment for him. But now he is getting to the end of his life. He’s looking back. and saying “this is my life. I’ve lived here for 40 years, I am happy here. I can give my children what I never had.” I think that’s the thing for him. In North Korea he found a form of happiness he never had in America. But it’s strange, because I got the impression that he kept running away when he was a child. His parents abandoned him. He ran away from orphanages. He went to the army, he wanted to run away. He found a wife, but she ran away. He got to South Korea and ran to North Korea. When he got to North Korea, he tried to run to the Soviet Union, but he was refused. So he had to spend the rest of his life in North Korea. I guess it was then that he finally realized “I can’t run anymore. I have to make the best of my life here.” And he did. We know more about North Korea now than we did then, but we still know very little. So for an American to come from that background and go to North Korea must have been an enormous risk. I cannot imagine what he went through. Now I think he is being honest when he says he is happy.

Was there any censorship while you were shooting the film?
We didn’t have any censorship when we made films in the North. Many people find that very difficult to believe. Most people who have ever been to North Korea find the opposite. But we’ve shot three films there. My co-producer Nick Bonner has been going there for 13 years. He is experienced. Really, we were left alone. We told them what we were doing, the type of film we wanted to make. From the very beginning we had an agreement to be flexible, because this is a documentary. So the story changed. It began that we were going to make films on Jenkins and Dresnik, but Jenkins went to Japan, and surrendered. Suddenly the film changed, but they trusted us. With every film we have stayed with the subject matter. So they left us to do our job.

There wasn’t any surveillance?
They were more like fixers. There was one woman we worked with from the beginning. She is not a member of the party. They are not people with dark glasses, suits and ties. They are film people. They have a responsibility for our safety. The only time they saw the final piece was when we sent it to them out of a courtesy.

There has been some criticism among Americans over this man.
I think in America the issue of defection is very serious. They have a very big sense of patriotism. No matter how bad things are you never go outside. But Britain had people who defected, so there wasn’t such a stigma. What I found very moving was his boyhood friend. He hasn’t seen his friend for 40 years, and still loves him. They were orphans together. They were like brothers. He never let the friendship go.

Are you going to make any more films in North Korea?
After we finished “The Game of Their Lives” I said never again. I am not going back. It’s too intense. Then we spent a year making “A State of Mind.” Definitely no more, I said. That’s the end. But after “Crossing the Line” we are not saying “no” anymore. My next film will be in England. Then I have a film to shoot in Africa for the BBC. There is a possibility that a girl from “A State of Mind,” Hyun-sun, will be training for the Olympics in Beijing. If she goes we will probably follow her. But things take a long time [in North Korea]. I really want to make a film about the South Korean football team. We haven’t found the finances to make that yet.

How did you feel about the North Korean people?
Since we started making films, North Korea has always been in the news for the wrong reasons. We try to show that North Korea as a whole is not an axis of evil. The political situation is very tense, but I’ve met many North Koreans whom I consider to be friends. No one wants to see a war. They all want to prosper; they want to get on with their lives. They want their children to be well educated. I always find that no matter what country you go to your perception of the country is totally wrong when you meet the people. When I was growing up in England, the only news from South Korea was about police, tear gas and students. South Korea was always portrayed as very brutal, horrible place to be. Then I come to South Korea, and it’s not like that. And I am sure even in the 1980s if I had visited here my experience of the people would not have been the same from what was portrayed in my country at that time.