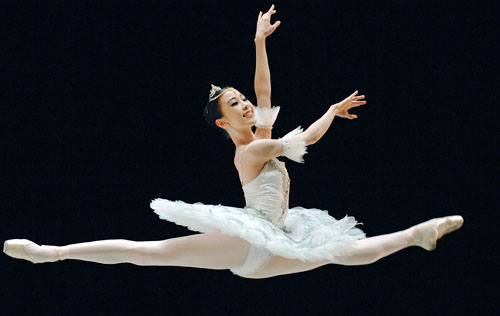 For only the third time, a Korean has won the top prize in the world’s most prestigious ballet competition.
Park Se-eun, 18, won the Prix de Lausanne, the international dance competition in Lausanne, Switzerland.
Another Korean, Kim Chae-ri, 17, took third place. The results were announced Sunday night in Switzerland (yesterday morning, local time).
The event, in its 35th year, is often dubbed the gateway for a prima ballerina. The competition is only open to junior dancers between the ages 15 to 19.
This year, 66 dancers from 27 nations took the stage. In the final round Ms. Park earned the best score by dancing to Gamsatti from “La Bayadere,” a dynamic piece with frequent jumps, and “Giselle.” Ms. Park won the silver prize at the International Ballet Competition in Jackson, Mississippi last year. In March, she was admitted to the Korea National University of Arts.
Originally, Ms. Park’s mother, a piano instructor, pointed her toward music. Ms. Park didn’t like sitting in one place, so in third grade, she began dancing. She attended a ballet school organized by the National Ballet Theater. But she fell behind, and in her fifth grade joined a class for fourth graders. Ms. Park was about to give up, when she received advice from Choi Tae-ji, director of the National Ballet Theater, who said ballet dancers have to practice for a long time to develop.
“I think I benefited by keeping to the basics,” Ms. Park said after winning the competition. “It’s more important to wear a toe shoe longer than starting earlier.”
The Prix de Lausanne has produced some of the world’s top choreographers, such as Jean-Christophe Maillot, director of the Ballets de Monte-Carlo; Julie Kent of the American Ballet Theater; Jose Martinez of the Paris Opera Ballet Theater and Diana Vishneva of Kirov Ballet.
Korean dancers Kang Su-jin of the Stuttgart Ballet Company and Kim Yu-jin debuted at Lausanne by winning first place in 1985 and 2005 respectively.