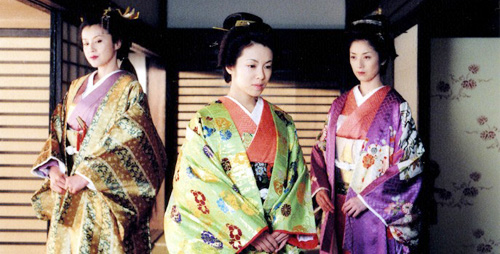 A scene from the “Ooku” series from Japan on Channel J. [Channel J]

If you want to know what’s hot in Korean culture just now, I have the answer ― Japan. The so-called “Korean Wave” appears to have lost its power, at least in Japan. I am Korean through and through, but I have to say this, even though hot-blooded patriots might start showering me with angry e-mails. Still, this is a free country and this is my column. So allow me to talk about something that I cannot miss in the Japanese cultural flow that is secretly seeping over the Korean Peninsula.
I still believe the Dokdo Islets, which Japan claims as Takeshima, should belong to Korea (although I wish the midget islands were simply not there), but I find myself enjoying Japanese novels, TV dramas and music. And I’m not the only heretic. Go to a downtown bookstore and you will see that one of the busiest sections is dedicated to Japanese modern novels and beloved writers such as Amy Yamada and Kaori Ekuni.
Yes, I've declared myself long ago as an aficionado of Japanese TV dramas. But the thing is, my love for Japanese TV dramas was kept in the closet. Translation: I saw many of them in pirate versions floating on the Internet. Now they’ve come out of the closet, as many cable channels are importing and running the dramas. There is even a Japanese channel, called Channel J, exclusively devoted to Japanese cultural imports. On a recent night I almost screamed with joy when I saw the “Ooku” series on Channel J while mindlessly flicking the remote control. It’s a historical drama featuring catfights among women who compete for the attention of the shogun in a Tokyo castle. It is a huge favorite of mine because of the splendid kimonos and other traditional Japanese charms. I worked the phones and found out that Channel J was officially launched with Korean capital.
Kim Jong-rae, in charge of publicity, ducked the question about audience ratings, refusing to give precise numbers. The closest he came to an answer was to say that the channel’s most popular drama ranks around 30th among the shows aired by more than 100 cable TV channels. “Still, we get phone calls from a fanatical audience, who want their favorite TV dramas and pop music,” Mr. Kim said.
Another publicist for MBC Movies, a cable channel run by MBC-TV, is more frank. She said that the highest rating for her channel’s Japanese TV drama is some 2 percent at the most. So, I asked, are Japanese TV dramas not so popular here? Then I was told that a 2-percent audience rating is quite good when it comes to a cable TV channel. “It’s true that we are disappointed by the audience rating,” she said. “But we understand that Japanese TV dramas here have a small group of fanatical fans, not a huge general audience.”
She added that her channel plans to import more of the shows. Currently, it is running “Nobuta-o Produce,” a recent production from last year.
Major TV networks, meanwhile, have constantly come up with their own dramas derived from Japanese originals. The most recent one is the medical TV drama, “White Tower,” based on a Japanese TV novel and drama with the same title.
The Korean government still bans shows in the Japanese language from major public-airwave channels, but a little channel surfing on cable TV will prove that Japanese language programming is readily available. “Secretto Sensei,” meaning “Secret Teacher” in English, recently finished on Mnet, a cable music channel here. It featured Korean musicians learning Japanese from a Japanese woman. Understandably, quite a large amount of the show was in Japanese.
Well, it’s true that the Korean Wave is still alive and somehow kicking, but it’s time to wake up from that sweet dream that hallyu will hit the world after conquering Japan. The alarm clock is ringing, and it could soon be time to get ready for a different cultural invasion.